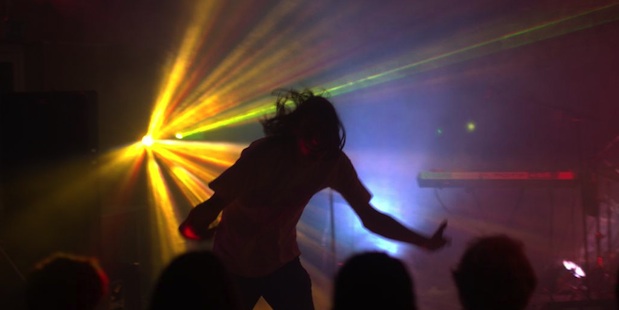 A selection this week that will surely test the new Suffolk’n’Cool site and podcast feed to the limit! We’ve got soloists from New York, South Africa, Texas, and British Columbia, duos from Ukraine and London, a quintet from Chicago and a sextet from Minneapolis.

But what unites them all is that they make some excellent and interesting music.

The words come through your speakers. Tense words. Sharp words. Hypnotic words. Words couched in grinding guitars and thudding drums, words thick with emotional desperation that also reveal the strangely paradoxical beauty in suffering; the diamonds in the cave, waiting to be mined. The words are those of Lauren O’Brien, one of the most exciting young poet-performers on the scene today.

“I love rock ’n’ roll, the passion and rebelliousness of it,” says Lauren. “But I want to be part of it in my own way—I want to take poetry and rock it out.”

Which is exactly what Lauren does—and then some—on Inconsequential Dream, her astonishing debut album.

It’s been a while since we heard from Lauren but this week a DM from Lauren prompted me to pull out another track for you. It is the title track from her debut album.

It’s been a long road but at last the new Suffolk’n’Cool site is now out there – in fact, by the most extraordinary coincidence you are probably looking at it right now. Amazing.

The move to a new site was necessary because, no matter what “mobile friendly making” system I chose, the site didn’t really work on mobile devices – not even mine! Also, the shownotes were on a separate site hosted by Libsyn who do such a great job of hosting the audio files too. The problem is that adjustments to the design of the Libsyn shownotes are very limited so if I refreshed the SnC site, it would have to be compromised by the shownotes.

The WordPress platform has come on in leaps and bounds in recent times and now offers a perfectly viable basis for all sorts of sites, not just blogs.

The result is that we are now live with a brand new WordPress site with a fresh new look which translates over to Facebook and Twitter.

I am hugely grateful to my good friend Justin Wayne (of The Justin Wayne Show). He’s a kindred spirit in regard to wanting to make a real difference for independent artists. So thanks for all of his technical and web-wise contributions to getting the new site working as it should be. Justin’s web work is done under the No Coward banner. There’s also a link at the bottom of the screen. Thanks also to Yannick from Euterpia Radio in France who rose magnificently to the challenge of building a brand new HTML5 player for the site – a brilliant job.

Thanks to you too for your patience I hope you’ll enjoy the new look, improved functionality and all the extra features that we’ll be rolling out over the coming months.

If you’d like to stay up-to-date with what’s going on I’d be delighted if you would join the SnC mailing list. We’ve never actually had one of these before but it will be essential to some of the things I have in mind for you. You’ll find a tab on the SnC site at the new, funky, streetwise url of suffolkandcool.com — yes, at last we dispensed with “all the dubs”. How radical is that!

The Chicago bred quintet coincidentally have collection of five gorgeous tracks on their newest EP, You’re Still A Lover.

Full of soaring choruses and introspective lyricism. All while maintaining the sincerity and charm that have endeared the likes of Impose, MTV Hive and PASTE who noted, “You’re Still A Lover moulds into a dreamlike stream of consciousness proclaiming hopes for love and happiness.”

Dreamy love songs like “Indigo” and “Teeth” wade into warm waters, showcasing the vocal chemistry between lead singer Stanton McConnell and sister Vivian, now fully acclimated into the group. Sprawling anthems “Springfield,” “North Coast,” and “I Love the Way You Seal a Deal” balance out the slower tunes.

Within the last year, Evans has been catching the attention of country music lovers in and around his hometown. Capturing audiences with his energetic live shows, filled with songs and stories of love, heartache, hard work and just plain living, Evans delivers with honesty, passion and a good measure of country attitude.

“The title, STEPPIN’ UP, paints a very accurate picture of where we are as a band right now,” said Evans. “After playing covers for so long, it’s refreshing to finally have songs that we can incorporate into shows to work to distinguish ourselves. I’m very excited to give everyone a glimpse of how far we’ve come.”

Playing both acoustically and with a full band, Evans has made a notable impact on the live circuit in Houston.

Produced by Josh Applebee at Sugar Hill Studios in Houston, Texas, STEPPIN’ UP is collection of six songs and is available now for purchase and/or download from his site.

A second track from Tailor who we heard from in SnC 337 a few weeks ago.

In early 2012, Melanie Le Roux, known under the moniker Tailor, set out to her hometown of Johannesburg to record half a dozen demos. She finished the session with twice as much material, as well as a newfound understanding of her inspiration.

“I began playing about on my guitar and singing lyrics that seemed to sail in to my head. I didn’t even realize I had written a song until the producer asked me to play it again because he hadn’t hit record,” she explains.

That song, the bewitching “Wolf,” is Tailor’s first single from The Dark Horse.

I’m seriously impressed by the openness of her writing and immediacy of performance on her album The Dark Horse on which Tailor leads with vocals, guitar, piano and bass and Matthew Fink contributes piano, guitar, and percussion.

Clear yourself 24 minutes to watch this video to get a pretty comprehensive picture of who Tailor is and how she creates the music.

Listening to Mint Juleps, the fifth album by two-time Juno Award nominee Jeremy Fisher, is like ambling through the long and relaxed dog days of summer. The acoustic-driven collection of 12 songs reunites Fisher with his folk-drenched musical roots and is a veritable throwback to the golden era of the singer-songwriter.

An ode to the glory of the record as a whole, the sophistication of Mint Juleps is in its inherent simplicity. Recorded live off the studio floor, this decidedly unembellished method of capturing the songs was a challenge for Fisher, but it was also a liberating experience.

In between the interpretations of songs by the likes of Greg Brown, Jean Leloup, and Lowest of the Low are a mélange of songs penned by Fisher that capture him at his absolute finest.

“Built To Last” is a catchy parable of taking care of oneself and the world at large by embracing a simple kind of life. It’s a pointed message for the current political landscape.

Jeremy Fisher has never really been one to build his career by travelling down the most obvious – or easiest – paths. His commitment to touring by bike is a case in point.

Since 1998 he has completed the journey across North America an astonishing three times, and in 2010 he launched a unique tour of the west coast called The Malahat Revue with fellow artists Said the Whale, Hannah Georgas, and Aidan Knight. Together, they travelled by bike with gear in tow, and pedaled roughly 500km across British Columbia.

Call him a renaissance man, or even a modern-day folk hero. Whatever you call him, it’s clear that Jeremy Fisher is bringing back the nearly forgotten art of making a great record from start to finish, and forging a career path that is built to endure.

www.jeremyfishermusic.com (Sorry, I may have given the wrong url in the show).

Public Service Broadcasting are a London-based duo whose main ingredients are:

2) Wrigglesworth on drums, pianos and other electronic things.

Taking samples from old public information films, archive footage and propaganda material, they teach the lessons of the past through the music of the future.

This track is from their EP The War Room (May 2012) and their new single Everest, was launched last night at XOYO in Shoreditch, London..

Communist Daughter continue their relentless touring in support of the Lions & Lambs EP (Grain Belt Records) and announce December dates with Jason Isbell and the 400 Unit. Endorsed by THE FADER, NPR and Rolling Stone, Communist Daughter draw comparisons to Bon Iver, The Shins, and Fleet Foxes. Their sound is heavy with bittersweet harmonies and introspective lyricism about singer, Johnny Soloman’s battle with a meth addiction, depicted in the cinematic videos for lead tracks “Speed of Sound” and “Ghosts.”

I just love the line “The life I wanted years ago is maybe not the life I should have found”.

“One’s real life is often the life that one does not lead.” – Oscar Wilde.

“Dark Patrick consists of Ukrainian Eva and Englishman Paul, who knit together the band’s hauntingly complex sound tapestry out of multiple instruments and elements. There’s a combination of vocals, whistles, harmonicas, hurdy-gurdy, synthesizers, and bandura, as well as various levels of better living through circuitry, resulting in an electronic-inspired stew that rattles and hums at various frequencies throughout Rise of the Underworld’s peaks and valleys.

Rise of the Underworld is a cinematic, conceptual album that ably defies succinct labelling and genre classification. It is a varied jaunt through successive layers of electronic stimuli, ghostly sound effects, ethereal vocals, and lush organic instrumentation, all threaded together into a cohesive whole that would work just as well as soundtrack, background ambiance, or fully immersive listening experience.”

They will be in the UK for their In Gogol We Trust tour in the spring (2013):

With more dates to be added.