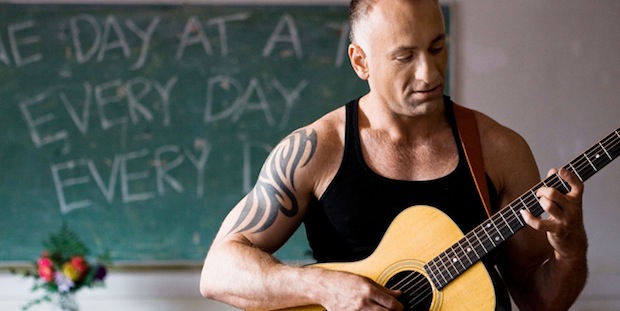 Dudley Saunders: Drive to fund first new album in four years from the master of nettle-grasping

An extended interview with the highly distinctive talent that is Dudley Saunders takes up the latter part of the show. He is an articulate and thoughtful man with interesting things to say about music and the emotional responses it evokes. His new album, the first in five years, isn’t out until October but we have privilaged access to a track to close the show.

From their eponymous EP out now on Fake Chapter Records.

The Mean Season is completely stripped down. Cherie, Ryan, and Mathias, three members that seem to have been together for longer than their years, create songs that are not overly complex and seem oddly familiar even though you have never heard them before. The music, derived from a myriad of influences, all retain the same soul. The lyrics are intelligent and powerful, born of long lunches sitting in front of paintings at the portrait gallery.

“The Mean Season has really caught my attention. With their submitted EP, the trio has made an album of undeniably catchy yet powerful indie rock songs with a folk tinge. The voice of lead singer Cherie on the title track (my favorite!) is haunting and beautiful. ‘Black Tie Affair,’ another favorite, is a nostalgic tune with a country edge which I found hard to get out of my head (especially the chorus ‘why does it always have to be another love song?’)” – The Deli Magazine

South African singer, Tailor, wrote half of her album, The Dark Horse, in just one day. That the songs spilt out of her without any warning is as strange and striking as the debut LP sounds.

“I began playing about on my guitar and singing lyrics that seemed to sail in to my head. I didn’t even realize I had written a song until the producer asked me to play it again because he hadn’t hit record,” she explains.

This song, the bewitching “Wolf,” is Tailor’s first single from The Dark Horse.

The need to escape drives much of The Dark Horse. It’s there in the acoustic guitar-driven “Ghosts,” in the sinister lyrics of the otherwise poppy “Step Back,” and at the heart of the oblique “Indian.” Even the album’s sunniest song, the glorious, handclap-backed “Love Anthem,” isn’t as happy-go-lucky as it sounds on first listen. For Tailor, The Dark Horse marks the end of her escape and the start of a new chapter.

“I love the drama in the album because it sort of sums up my life – lots of ups and downs, like a rollercoaster ride. It’s odd, but it’s also in your face. It’s not just like me, it is me.”

A lovely new take and genuine collaboration between The Orb and Lee “Scratch” Perry.

Conveyor is a Brooklyn-based music project spawned by the fated juncture of a wandering tarot of musicians in Gainesville, FL. Was it kismet or perhaps a primordial summon which led these gentlemen purveyors of sound to individually tune in and migrate North to the bustling seductress known as New York City?

Their retort is Sun Ray, a debut EP birthed and released in the warm embrace of Spring 2011. Brimming with lucid, homey synths layered over acoustic guitars and harmonious vocals, they channel extraterrestrial bible-thumpers drenched in love, spouting acid-soaked pop unabashed to beam with the simultaneous embrace of life/death realities backed by a polyrhythmic, pulsing backdrop. A decidedly grand task indeed, and following a string of self-released, handmade EPs, they are releasing their debut full-length album in 2012 with Brooklyn’s Paper Garden Records, a testament to our nature and the nature of ourselves.

From Dudley Saunders 2007 album The Emergency Lane. A dark, discomforting and ultimately quite beautiful song.

Monsters is the first Dudley Saunders album since 2007 is scheduled for release in October. Right now the drive is on to secure $4000 in pledges to support the album’s release. Dudley has a Kickstarter campaign running which gives music lovers a chance to help the album reach a wider audience and get their own copy a full month before release. There are a range of pledge options from the $10 digital download to a more substantial pledge that will see Dudley drive or fly to your location and play a private concert just for you and your friends.

He tells us more about his motivation, music and people’s reactions to it in this extended interview. We need to respond quickly. The campaign ends in 9 days, at 11.09 on 1 September.

If the target isn’t reached, the campaign ends, pledges are deleted, no money changes hands and the album release fund is empty.

If the pledge target is reached at all goes ahead and you’ll get your download (or whatever you pledge for) and the money will be there to make the release happen.

A fantastic preview of the almost title track of Dudley Saunders’ upcoming album Monsters, due for release in October.