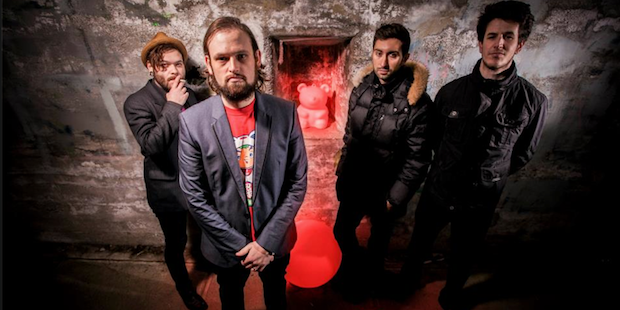 Import/Export make a welcome debut on the show this week.

A somewhat eclectic mix this week with fresh tracks from Lancashire, LA, Haifa, NYC, Seattle and Margate. We’ve got news of a really interesting little festival in upstate New York, a correction from Erk and a campaign to get a song to the top of the UK charts this week.

Heifervescent is essentially the solo project of Andy Doran, writing, performing and producing each track. The music has often been classed as beautiful yet sullen soundscapes, laying strong simple melodies and chiming guitars onto a bed of ambient string and hypnotic electronic arrangements. This has certainly been the case of the latest offering Little Egg and 2005′s Pondlife Fiasco featuring the most downloaded Heifervescent track – Deep Sea Diver.

Liberty GIrl is taken from the forthcoming album Wake Up Sheepyhead, available from May 1st from iTunes, Amazon, CDBaby and many other outlets.

A prime mover on New York’s downtown “No Wave” scene in the early 1980s, Tomas Doncker cut his teeth as a guitarist with such genre-busting groups as James Chance & The Contortions, Defunkt, J. Walter Negro & The Loose Jointz and many more. Eventually he went international, touring and recording in Japan with jazz pianist Masabumi Kikuchi, and producing studio and songwriting sessions with Boosty Collins, Yoko Ono, jazz saxophonist Sadao Watanabe and Grammy-winning producer Prince Charles Alexander, to name just a few.

His latest work as a singer/songwriter and producer embraces a broader musical vision that he likes to call “global soul,” drawing influences from numerous sources, including East and West Africa and the Caribbean. Small World is the flagship release on his own label, True Groove Records (distributed by Sony/RED), and will be followed by Power of the Trinity, a meditation on the legacy of Ethiopian emperor Haile Selassie, featuring legendary bassist/producer Bill Laswell, Ethiopian singer Ejigayehu “Gigi” Shibabaw, Senegalese percussionist Aiyb Dieng, saxophonist Peter Apfelbaum, electro-dub specialist Dr.Israel, and a host of New York’s finest jazz, funk and rock musicians.

Man Near the Surface of the Earth – Détective (Los Angeles)

Named after the Jean-Luc Godard film, Los-Angeles based garage pop outfit Détective was formed in March 2012 by James Greer (ex-Guided By Voices, Roi, Complete Portion Contol, etc.), Guylaine Vivarat, an active member of the LA music scene (Useless Keys, 2 Hearts & Chemicals) and Chris Dunn from Chicago (the city).Détective has thus far released two EPs, Very Fallen World and Basket of Masks. A full length album, However Strange, was released in late August on cassette by Burger Records to coincide with a national tour opening for Guided By Voices in September. The group is currently working on an ambitious double album with Steve Kille of Dead Meadow, which they had hoped to release by March but, you know how these thing go.

In 1982 NYC-based eccentric Nomi recorded this song from The Wizard of Oz which works well as a commentary on Margaret Thatcher’s politics. We’ve been waiting a long time.

There is also a campaign to get the original version by Judy Garland (from The Wizard of Oz) to the top of the singles charts. As of this afternoon, it is at number 2.

OK, it may seem a bit childish but there has to be something to counter the pathetic sycophancy of most of the UK media and the assumption that in these times when cuts in public spending are disproportionately affecting poorer people, that spending £8m on security for a grand ceremonial funeral is OK. I bet it won’t get into ra=otation on the BBC music channels 😉

It’s on iTunes and Amazon

BTW, just so you know, I don’t want a ceremonial funeral – I just want to be scattered. Don’t bother with cremation, I’m sure farmer Mark has a suitable muck-spreader.

A track from the very recent Marla Mase album Speak (de Luxe edition) which I’m delighted to say I brought back from a meet-up with Marla and Tomás Doncker at one of the London shows in her current European tour.

The live show was stunning, perhaps even a bit too stunning for the young Islington set but hell, can these guys rock!

This song, Squirm ended the set with Tomas giving his guitar a very thorough workout and Marla “squirming” on the floor.

Working and playing since 2009, 3421 is a live dubstep, bass and glitch duo based in Haifa – the northern capital of Israel. They use an acoustic drum set, 3 synthesizers and vocals to create the sound and flow of a DJ set. Their tunes are played tightly and mixed throughout the show, preserving the energy of a live performance. They use no computers or loops, but rely solely on the fusion of skills and instruments.

Their skill as performers mean they have been at the core of the local underground scene for the past 8 years, and they combine a vast mix of electronic genres – dub, dubstep, electro, hip hop, glitch, heavy bass, breaks and jungle.

IMPORT/EXPORT will be announcing a west coast tour in the upcoming weeks in support of their new album Dayglow Whore.

In addition to multi-colored vinyl, Dayglow Whore is also available via a generative art iPhone/iPad app on iTunes. The iPad app generates over 92 million morphing images of fine art by Katrina Yakovich and photos taken by each band member that would take over 43 years to view (no, that’s not a typo). The iPhone version features over 655 years worth of viewing set to the soundtrack of Dayglow Whore. Both were designed by IMPORT/EXPORT keyboardist Vince Tafoya with programming assistance by Kory Twaites.

“The philosophy behind IMPORT/EXPORT is to release and perform multimedia experiences. We played with the idea of converging old recording concepts like using tape and new technologies like digital apps because our fans will want to experience both,” comments bassist and front man Chris Cullman.

Erk puts me straight. So it seems Wagga Wagga sounds funny but the city of Wogga Wogga is just fine? Huh, Aussies eh?

Elephant 12 is back in action with their raw brand of Rock n’ Roll at it’s best. Hailing from the United Kingdom and Canada, respectively, the band brings their own brand of heavy hitting Indie Rock laced with a tinge of Hip Hop to the mix; truly a brilliant experience. Making waves with the singles “Holiday,” and “Renegade,” late last year, Elephant 12 have just released Sold Out, their new stunning EP that will stop you dead in your tracks, and have you dancing around the room at the same time. The standout single, “Love Knock on Wood,” is filled with incredibly catchy harmonies, enthusiastic handclaps, and laced with punchy guitars that will draw you in immediately.

Jerome Cooke’s unique vocal styling is one that you will not soon forget. His voice provides the perfect blend of Rap with a tinge of Jazz in the background, and a dash of Indie on the side. Truly a captivating sound.

Elephant 12 is known for making their own brand of unapologetic punk rock with Electro and Indie Hip Hop undertones, which bring a whole new outlook to an often predictable music scene.

Check out their site, that track and more are available for free download.

Albany ranks as the nation’s 9th largest breeding ground for new music and is the location for this year’s MOVE Festival for the second year running.  For those that couldn’t afford the price of a ticket to Austin last month, MOVE Music Festival is the alternative.  Move is an indie music festival that premiered last spring and is completely focused on spotlighting diverse and emerging talent, much akin to the early days of SXSW.  It takes place on Saturday, April 27.

SXSW grew from 700 attendees in 1987 to over 300,000 in 2012 and even beyond that this year. In the same way that SXSW started out as an organic stage for showcasing and promoting indie music and film, and encouraging progressive dialogue within those industries, MOVE is attempting to do the same.

General admission wristbands cost $15 plus shipping and handling. Check out the Pledge Drive where you can pledge for early access & discounted packages to MOVE 2013!

The riveting Funke and the Two-Tone Baby has a new single coming out in a few weeks, and we have a preview. There’s also a rather fine video for the same track here.

If plans come together Dan (aka. Funke) will be here at the Barn to record a live session and interview for us in a few weeks.

His next serious tour runs throughout May. Do get to at least one of these dates if you have half a chance:

May 5 – The Marlowe Theatre, Canterbury

May 7 – Hidden Away Music, Wimbledon, London

May 11 – The Emperor, Cambridge

May 12 – The Boathouse, Cambridge

May 21 – The Prince Albert, Stroud

May 24 – The Winchester Gate, Salisbury