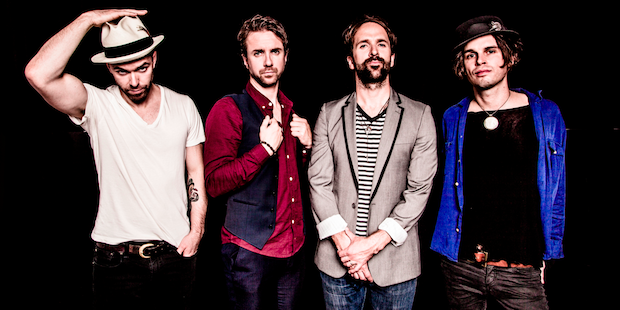 The Trews – keeping the fans satisfied. A new EP, between albums, this week.  (Photo: David Bastido)

Checking the playlist, I see we’re going to be hearing exclusively from UK and Canadian artists this week. Purely co-incidence but an interesting mix, I hope you’ll agree.

The Power Of Positive Drinking – The Trews (Antigonish, NS, Canada)

The Trews has built its reputation belting their high-energy, arena-ready rock anthems from stages across the globe.  The band is set to release its new EP, …thank you and I’m sorry (Bumstead Records) this week. The Power of Positive Drinking is the opening track

The 7-song EP is the follow up to the quartet’s fourth full-length studio album, Hope & Ruin. It features The Black Crowes guitarist Rich Robinson and includes the song “Leaps and Bounds,” written by Australian Rock icon Paul Kelly. In all, there are seven new songs co-producded by Gordie Johnson and Trews guitarist John Angus MacDonald.

The EP doesn’t have the “concept” feel of a full-blown album but don’t dismiss it as “just a few songs”. It’s actually a great way of keeping fans on-side and the flow going between albums that do, indeed, require a great deal more work. Indeed, that’s how The Trews are using this 7-song release, with an eye to a whole new album coming in 2013.

“We love having something new for our fans, something we’re excited to share,” says The Trews vocalist, Colin MacDonald.

The best is that these aren’t throw-aways, but a rather strong collection, and interestingly, a bit of a different sound for the band as well.”

Come the new year, The Trews will return to writing material for their next full-length – even if you can wait, take a listen. This is an excellent EP not to be missed.

Available physically in Canada and Australia, the EP is a digital only release in the U.S.

“I love music. I’m so glad that i have had the opportunity to make it with good friends and its my sincere hope that if you stumble upon my music that you find something in it for yourself to enjoy or connect to.

I have no demands of music except that it continue to exist in my life which it does …and for this I feel excessively fortunate.

Les Cooper has been an integral contributor to the songs. We made these songs together in the greatest spirit of music during afternoons where we killed a few hours in the company of one another, laughing, discussing life and strumming a few chords with generosity of spirit and mind. Les is an incredibly gifted, creator and you should search him out. He infuses all his projects with something incredibly special which I’ve been thrilled to hear and share with him all these years.”

The two members, Andy Yeoh (Drums & Vocals) and Simon Miller (Guitar & Vocals) met in school, where their shared musical understanding began to take root. By the time the pair finished university in 2008, both were experienced musicians with plenty of song-writing and performance experience. It was only natural that Hot Fiction, formed in 2008, would follow.

The band continued to gig regularly in venues all over the country, finding their centre of gravity in London, where the pair gained a cult following. The release of the band’s first album Dark Room brought an international dimension to the band’s success, attracting a new wave of fans, particularly in the US, Spain & France. In the three months following release, Dark Room was the no. 1 most popular album on the free music site Jamendo.com, where it has over 100k plays to date.

Hot Fiction released their follow-up album Apply Within, in October this year

I had the pleasure of catching Funke and the Two Tone Baby’s first set at a gig in Suffolk last week. A thin but enthusiastic audience appreciated his distinctive and beautifully executed music.

I suppose that’s just the way of live music for most musicians, especially those that are ploughing their own furrow, playing what they believe to be their best and giving it their all.

We seem to find quite a few in that stage for Suffolk’n’Cool. I salute their integrity and their passion. They keep on despite the cold dark nights competing for attention in really basic venues, travelling silly distances to play for peanuts, just to get their music out and connect with their audience and (hopefully) turn them into fans.

Nobody in his or her right mind would pursue this lifestyle in the expectation that they’ll get a living out of it yet these folks do. I don’t think they are delusional or total egotists. They do it because they have to. It’s like a missionary zeal. Unlike most missionaries, their work enriches our lives and I thank them for it.

The ‘Injustice & Queen’ EP is out now, available from shows, or digitally at iTunes and Bandcamp

Debut album scheduled for release in summer 2013 with larger UK tour to support.

Reuben Bullock’s introduction to the international music scene is surreal enough to have been scripted. His decision to purchase a last minute plane ticket to Mexico was the first step in a series of serendipitous events.

The chance that one of the Calgary-based artist’s songs was booming from the stereo of a beach front café at the very same moment Florence + the Machine’s manager Mairead Nash walked by seems less like chance and more like kismet. The song, a single from the band’s self-released debut album Man Made Lakes, was enough to prompt Ms. Nash to enter the café and inquire about the artist … who happened to be on the beach nearby.

Their meeting lead to an impromptu show in the small Mexican town they were both visiting, with Christopher Lloyd Hayden, drummer for FATM, joining Reuben on stage. What came after involves matching slingshot tattoos, a trip to London, a single produced by Hayden, and an EP to be released in the new year.

Shoulderblade is the first single from Reuben and the Dark’s forthcoming yet-to-be-titled EP, to be released on Luv Luv Luv Records in early 2013.

The new album from Old Time Machine (Ryan McNally, Kyle Cashen) was released recently via File Under: Music.  The 9-track album comes on the heels of the bands’ critically-acclaimed debut EP, Old Time Machine/Old Cabin.  Produced and engineered by Jordy Walker, the full-length has already received incredible reviews throughout Canada.

Forming in 2009, Ryan McNally and Kyle Cashen came together for an art exhibition.  In a fort made of cardboard boxes, scrap lumber, thrift store sheets and chicken wire, the duo started as the art-show contribution of a bluesman and a bedroom-musician who were tasked to create works representing the long, dark Yukon winter nights.  The duo work together to blend Ryan’s studies of finger style traditional blues, with Kyle’s experience crafting ethereal soundscapes to create familiar, but distinctly original music.  Music that Uptown Magazine claims, “many will soon be familiar with.”  Released in Canada this past April, the two have been touring relentlessly in support of their debut album from which this track is taken.

Ghost in my Head – The Cult of Dom Keller (Nottingham, UK)

Formed this year by artist Simon Welford and Mark Gardener and having since enlisted such stellar acts as ex Stone Roses guitarist Aziz Ibrahim, Dean Garcia of Curve and Adam Franklin of Swerverdriver, plus a cast of multi-talented musicians, Hush Delirium is the art/music project that is causing a real stir both in the UK and overseas.

The concept is simple. The musicians involved in the project each create a piece of  music that is then supplied to Simon Welford. He then uses that track as inspiration to create artwork that he feels is representative of the song supplied.

Once completed, the art & music are then shown together, in either gallery style exhibitions or one-off events, giving people the complete Hush Delirium experience.

The Taster LP features exclusive music from some of the artists involved in the Hush Delirium collective. Among others, you’ll be able to access brand new tracks by Mark Gardener (Ride), Adam Franklin (Swervedriver), Aziz Ibrahim (Ian Brown, Stone Roses, Paul Weller, Simply Red), Nottingham’s very own psychodelic rockers The Cult Of Dom Keller and more from both sides of the Atlantic.

For a limited period of time the album can be downloaded for free from the project’s bandcamp at http://hushdelirium.bandcamp.com/album/hush-delirium-the-taster-lp

Kontravoid is the recent solo project of Cam Findlay – drummer for bands such as Crystal Castles and Trust. After departing as writer/producer for Toronto band Parallels, Findlay has settled into a music venture he can call his own, assuming the identity of this masked alter-ego for what appears to be a permanent ride.

“The confidence on The Hidden Names comes from the rather successful experiments in pop simplicity of our work on Ambiguoso,” says Stull, who also produces the band’s work.

“The emotion is closer to the surface. We feel less and less concerned with coming off as cool and calculated and have decided, instead, to just write simpler pop tunes.”

The Hidden Names also benefits from a winning chemistry in and out of the studio, on stage and off. It is the first album to feature Alison Maira on keyboards. Joining singer/guitarist Stull, bassist/vocalist Julie Bavalis, guitarist Rees Haynes, and drummer Robert Linton.

“Alison is an excellent player,” Stull says. “Introducing her and her keyboard work has lent us a lyricism, a beauty we didn’t have before.”

What makes The Hidden Names stand out is that the five-piece band contributes with single-minded energy to what Stull calls “the greater good of the song.”

Sadly the band stopped playing in January this year. The music will live on.

Catch next week’s show which will be marking a particularly significant date in the calendar – think about it..