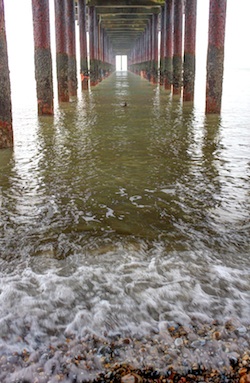 Life is still totally frantic and in some respects tragic but I’ll not dwell on that.

The somewhat belated Adnams Artist of the Month is announced in this week’s show as part of a slightly different AOTM feature if you have a view, I’d be delighted to hear from you.

I’ve rarely seen such limp sea as that at Southwold yesterday. The waves (such as they were) hardly seemed arsed to drag themselves onto the shore. Still, it made for a very atmospheric day; especially under the pier.

Lines – Said the Whale(Vancouver, BC, Canada)

In March of 2011, the band embarked on their first major tour of the United States, including several performances at the SXSW music festival in Austin, TX. On the fourth day of that tour, their van was broken into and they were robbed of over $8,000 in gear and personal belongings. This tour was also being captured by a CBC TV documentary film crew for what would become “Winning America” a film exploring the trials and tribulations of a band trying to break into America, airing this July. Amidst the US tour dates, the band flew into the Toronto-hosted JUNO Awards, where they won New Group Of The Year. The band promptly returned to the States to complete their tour, returning home just long enough to do laundry and repack before hitting the road again to tour across Canada.

Do you hear the line I think I hear? See SnC episode title.

Their current album, New Brighton, was released a couple of weeks ago.

This track, Burning Senses is on their album Painting on Shadows

Many thanks to those who have already donated to help maintain Suffolk ’n’ Cool to provide the quality of service that we strive to achieve. There is a Donate button on the SnC homepage at www.suffolkandcool. com

Slippery Slope – The Do (Paris, France)

If ever a band could make Paris sound like LA, it’s The Dø. French duo Olivia Merilahti and Dan Levy made history in their linguistically protective native land when their English-language LP, A Mouthful, went to #1. Surprisingly, The Dø were the first French-based band to pull off such a fete. But, upon closer inspection, the band’s bold decision makes perfect sense – their songs were always destined to export themselves to America and win over audiences one chorus at a time, which is exactly what’s happening right now.

Their new album Both Ways Open Jaws was very recently released in the UK.

Adnams Artist of the Month – Chosen by Duncan Gooch

Duncan Gooch, who manages the Adnams Cellar and Kitchen store in Southwold, talks to us about his work and his passion for music.

There is a slightly extended version of the interview on the Adnams Artist of the Month page for October 2011.

An older track from Gadjo, from their 2007 album Parayayasygamberros

You can download this track free and totally legally by clicking in the arrow here:

Mammút is a band from Reykjavik, Iceland consisting of three girls and two boys aged eighteen and nineteen. In 2004, three months after forming, Mammút won the annual battle of the bands (Músiktilraunir) competition in Iceland . This has been the springboard for some of the most promising bands and artists in Iceland. Since then Mammút have been playing gigs all over Iceland and Europe ,including supports with Belgian art rockers dEUS. Their music has developed in to something quite unique distinctive vocals and angular guitars held together by brilliant melodic bass and innovative drums.

This week Rodrigo is hosting the show from the Azores Islands and then from Monday, Rowley from Dark Compass takes his turn.

Reset All Systems is a 12 track masterpiece from Daniel Stephan & Heiko Petry, aka, Mastermind XS.

These two friends have already released one EP on the LCL label, called One Dub Many Roots, and were on the first release from Angel Dust Records: Dust Particles, Volume One.

Do check out their page at Angel Dust which, as you know, is run by Pete Cogle as a not for profit enterprise. http://angeldustrecords.com/home/?page_id=650