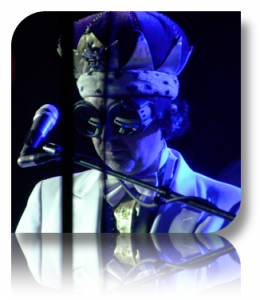 This week a few of the artists that impressed during CMJ week.

I’ve not really had time to go through everything and take proper stock but for now here’s a taste of just some of the music which made it through to my ears. I know I missed an awful lot because I could only be at one venue at a time and that means that around 69 had to be missed.

There are a number of approaches to deciding what music to catch, from planning out a detailed schedule and not being distracted from the plan, ever, to wandering around the LES and trying to get into any venue that sounds good. I think a combination of the two, and, sadly being prepared to leave a show that doesn’t enthral is probably the best bet. The new CMJ app is certainly a great help in keeping track of what’s happening where. But what ever approach you use, missing good stuff is inevitable.

You can still see the schedule at http://schedule.cmj.com/

Find out about the CMJ Music Marathon and Film Festival at:

I met Gangstagrass mastermind Rench in the exhibition lounge at CMJ’s main location in NYU.

Love what they’re doing or hate it, they don’t leave many listeners unaffected. Their highly accomplished rural bluegrass playing is combined with an urban sound to quite extraordinary effect.

I was caught out in the rain late one night last week and almost collided with a guy heading for the shelter of a doorway. We said hello and I moved on down the street in the confident expectation that Todd would be picking me up at any moment in the car.

The following night I saw the unmissable Will Knox play a superb set at Rockwood Music Hall. After the set, Will introduced me to the band, including banjo player Kyle who said we’d already met, fighting over the doorway!

I like it that CMJ is a) that friendly a bash and b) small enough that that sort of thing can happen.

Then track is from his brand new album, Oh Oh.

“Though it was an extremely difficult CMJ decision, the ultimate lady songbird for me was Grace Woodroofe, whom I caught at the intimate Living Room. The self-taught singer-songwriter, who hails from Australia, has a bluesy voice that can easily run the gamut from soulful croon to full-on howl to heartbroken wail. At one point during her set, she seemed completely lost in her composition: all six feet of black lace swaying woozily, fingers strumming guitar strings with astute rhythm, eyes closed and barely visible through the thick curtain of hair over her face. I looked around and saw that the crowd mirrored her trancelike state—not a trace of CMJ jadedness remained in the room.”

Her set at the Aussie Barbecue was an altogether more upbeat affair in which the band even managed to blow the stage power. We’ll have a track which reflects that side of her music next week.

Peg and I met up for coffee on Saturday, although by the time I had got to The Court Square Diner in Long Island City, it was time for an early lunch. (www.courtsquarediner.com)

Peg is a fascinating artist with a real ear for the potential for the spoken word to be incorporated into songs.

Her EP, Secrets from the Storm is a great listen.

Peg has a rehearsal space not far from the diner and on the way there she showed me an amazing industrial building which now provides studio space for artists.

From their album Rapid Empire (which has been featured on the show before).

We met up at Ariel Hyatt’s CMJ Wrap Up party where the band played an excellent set – I hope I might have some video of one of their songs in the next week or so.

Ariel has a beautiful house in Park Slope, Brooklyn and each year hosts a great party in collaboration with Sounds Australia who provide the BBQ. This year, as last I got involved in cooking apple pies with Ariel. The Wrap party really is one of the highlights of CMJ for me. The pressure is off, everyone relaxes and friendships are developed.

As the CMJ staff blog said: “Their upbeat songs and emphasis on vocal harmony exudes a Brian Wilson in Williamsburg vibe….If you have a penchant for getting songs stuck in your head and liking it, don’t miss this show.”

Jordan Reyne has a new album out. Children of a Factory Nation was launched in Second Life earlier this evening.

Children of a Factory Nation has become Jordan Reyne’s latest release and a fine offering it too.

This is a live performance recording I made in Second Life this evening. The album version of The Arsonist will be in AMPed next week and there is a brand new video for the song on her site at:

Brother Joscephus and the Love Revival Revolution Orchestra are an 12-piece explosion of love and righteousness specialising in Groovy New Orleans-inspired Roots Rock/Soul with a Gospel feel but without the religious overtone – kind of secular gospel!

I first played BroJo on SnC 160 back in 2009 so it was a treat to catch them live and what a show they put on at the Hiro Ballroom on Tuesday.