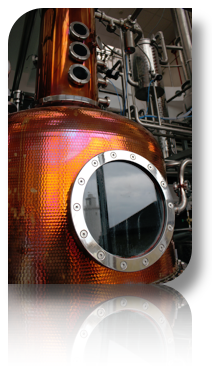 Music from all over the shop this week although a couple are from Italy and news of another session at the barn coming up soon.

I forgot to mention in the show that there is a +1 button just to the right here > give it a click if you “like”.

I couldn’t resist using this pic of part of the new Adnams distillery which Jordan Reyne and I visited last week. See Southwold lighthouse reflected in the window?

Having played their track One by One back on 259 it really is high time we checked out another Trews track.

The album was recorded in the wilds of Bath, Ontario.

“We were just looking to run away a little,” guitarist John-Angus MacDonald admits. “And we wanted to do something fun, organic, be a band again, all that stuff.”

“It was like anything was up for grabs,” continues John-Angus, “And we just needed to get a hold of where we were at, which is why we retreated to Bath. We went there to try and figure out what kind of record was in us.”

And so bassist Jack Syperek, drummer Sean Dalton, and the two MacDonald brothers faded into the bucolic splendor of Bath, Ontario, where they had so much fun and got so organic that a couple months later, the Trews had a new album – Hope and Ruin. Or maybe it should be called Order Out of Chaos.

June 28: Mercury Lounge, New York, NY 10002 (on East Houston Street in the LES) just a hop and a skip from the legendary Katz’s Deli.

Charlotte Eriksson, also called the GlassChild, is from Sweden, Gothenburg, but has always gone her own way, leaving people amazed by her determination and independence. Only 19 years old, she moved all on her own to London to pursue her music and prove what she can do. After only 3 months she has already played with a full band at famous venues around London like the Water Rats, the Bull & Gate, the Enterprise etc. and she’s steady and carefully building a name for herself.

“I moved and left everything I had built for 19 years. I learned how to build my home in my music. When I sing, I’m not scared anymore. I want this to mean something. I believe in writing your own story, and that’s what I’m doing here. I’m just a glass child. I’m still creepy little me.”

She’s switching between lyrics like poetry with a fragile broken voice, to strong and edgy songs with a crystal clear punk/rock-voice that cuts right through. Being compared as a ”punk  version of Bjork and Lykke Li”, to songwriters and vocalists such as Hayley Williams (Paramore) and Juliet Simms (Automatic Loveletters), she’s got a lot of power in her many ways of using her voice. Her music is naked and honest, and leaves you with feelings you never thought you had. ”I want to make a mess inside of people. I want to make them think.” the 20-year old says.

Catch Charlotte at The Dublin Castle in Camden, London on Tuesday 28 June

Pete Cogle is presenting AMPed right now at musicpodcasting.orgtake a listen to 10 very varied tracks and see what you like

From Monday why don’t you join Alan Carr form Dark Horse Radio who will be along with a gleaming wad of new music for you.

The Kobolds are a New York City alternative rock band with a home-base in Astoria, Queens.

Alex Grau and Nicholas DiMichele first started playing music together as teenagers in College Station, Texas. After moving to New York to pursue degrees from NYU, Alex and Nick enlisted Pennsylvanian drummer Andrew Benson from a local Guitar Center. Using intense intimidation tactics, Alex, Nick and Andrew coerced their long-time friend from Texas, Spencer Synwolt, to start a new life in New York and round out the rock quartet.

From the album Madreperia on the Materiali Sonori label

Banditaliana was founded by internationally renowned composer and concertina player Riccardo Tesi, rated as one of the most daring and authoritative musicians in the European scene.

“Original compositions, instrumental virtuosity, precious rhythmic grooves and refined arrangements represent the stylistic features of the group, that over the years has gained a reputation as one of the most interesting bands in international world music and has achieved great success while touring Europe and Canada, taking part in some of the most important folk and  jazz festivals.”

LCL netlabel has created “La boite a sons”, a free sound bank under a CC by-nc license, supplied by the artists who released on their label or collaborated with them.

The aim of this approach is to push further the use of CC licenses and encourage musicians to share more than just their tracks : share their raw materials !

You are free to use the samples, loops and a-cappellas in your creations as long as you respect the terms of the by-nc license.

The sounds are available free as zip files and are hosted by CCmixter.org

What’s more LCL have set up a competition which is now being judged by a bunch of highly respected netlabels. There are 20 entries on the LCL site all free to download and it will be interesting to see which mix wins.

An excerpt from a 14 minute track from the LCL competition entries list.

Check all the samples and the entries at

New Brunswick, Canada’s Matt Andersen has a larger than life showmanship that has been earning him a fervent and steadfast audience wherever he graces the stage. Matt’s sprawling blues, roots and rock musical hybrid with his sorrowing and soulful voice and astonishing guitar-playing has sparked a phenomenal buzz on Canada’s East Coast.

The great news is that he’s coming into the Barn to record a session with us at the end of the month. By a strange quirk of fate, he’s also playing a gig only a couple of miles across the fields at the delightful White Horse pub at Easton. It is part of the Maverick at the White Horse series of gigs being promoted by Paul Spencer who also puts on the Maverick Festival (1-3 July).www.maverickfestival.co.uk

Matt Andersen is a very real, rare, raw talent and career artist — vital to our musical landscape. For more info on Matt and his music catalogue go to www.bustedflatrecords.com.

Originally courted by Columbia as a solo act, Krissi flouted the advice of her friends and family, electing instead to assemble a band from scratch and work out her signature sound gigging live. It worked. Continuing to write, record, gig and explore new genres and sounds, Krissi’s material is a fresh blend of rock, pop, reggae, punk and funk, best characterized by her compilation track, “You’re Forgettable” (based wryly on her true-life first heartbreak.

It’s a while since Radio Nowhere were on the show and they now have a new free 5 track EP “Under Strange Skies” available for you.

There’s a no strings download of three tracks on Jamendo (www.jamendo.com/en/album/91320 ) and a higher quality 5 track version available from www.radionowhere.net/uss/ussjamendo in exchange for signing up to their newsletter with an email address.