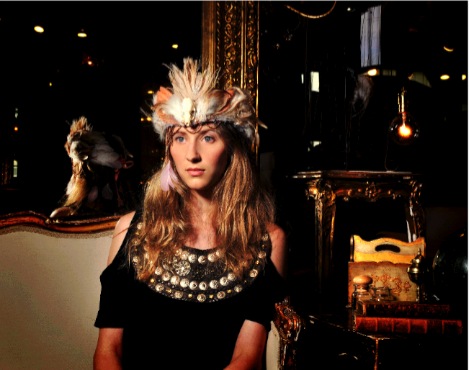 Multi-instrumentalist and stunning vocalist. Half-French and half-American, Sydney Wayser grew up in LA but spent a few months every year in Paris.

She gleaned much of French culture from her songwriter father, leading her to musical influences that include Edith Piaf, Charlotte Gainsbourg, and Jacques Brel, among many others.
Now based in Brooklyn, New York, Syd is very much part of the vibrant independent music scene in that lively borough.

Her European sensibility is evident on both albums The Silent Parade and The Colorful and she has a new album, Bell Choir Coast slated for release in March. Meanwhile you’ll hear more tracks in the coming weeks on Suffolk ‘n’ Cool.
www.sydneywayser.com/

The Artist of the Month for November 2011 is selected for us by Canadian/Brit Tyler whose passion for creating wonderful dishes for the restaurant at The Crown seems to be rivalled only by his appreciation of interesting music.

Hear the extended interview in which Tyler talks about his music, his cosmopolitan background and and how Suffolk, Adnams and The Crown lured him.