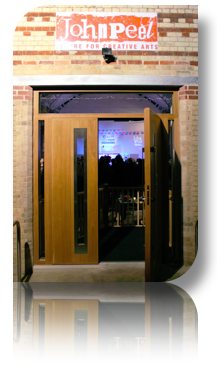 John Peel was undoubtedly one of the most influential people in British music. To describe him as a DJ, radio presenter and journalist is really an understatement. The breadth of his musical taste and quietly stated way in which he implored us to really listen to what he played defined a musical culture which lives on today.

On Friday I was invited to Stowmarket, here in Suffolk, to celebrate a landmark point in the development of the creative arts centre that bears John’s name. John lived with his family in a small village just outside the town for over 30 years.

Since John’s death in 2004, there has been a Peel-shaped gap in a lot of people’s lives, mine included. What better to fill that gap than a space adopting an eclectic and non-elitist view of the arts – and opening doors to participation. In short, Keeping it Peel. That’s exactly what The John Peel Centre for Creative Arts has the potential to achieve.

Founded in 2004, Volfoniq is a “one-man-dub” from the south of France. In a retro-futuristic mood, he uses his classical formation (clarinet) and a rich musical history to produce a dub that goes farther than tags, respecting the jamaican roots, but adventuring into new lands of experimentation.

Based both on electronic and acoustic elements, his music is fundamentally opened and generous.Encounters and sharing are at the center of Volfoniq’s approach, that led him to collaborate with numerous artists from different kinds and places. On this pilgrimage, he’s faithful to LibreCommeLair (LCL) label, and also made some releases on prestigious e-labels like Jahtari or A Quiet Bump.

Get the album from LCL at www.lclweb.org/audio_lp_lcl30.htm

I had a catch-up with Sunderland-based blues manTrevor Sewell this week who has just picked up a highly prestigious award – in Hollywood!

You can still download a special collection of tracks which Trevor put together especially for SnC listeners.

Where The Wild Ones Go – Trevor Sewell (Sunderland, UK)

From Trevor’s album Calling Your Name

Kołobrzeg is right up on the north coast of Poland looking out towards Sweden.

The current show is 311, hosted by Ro Cutler from Dark Compass – he played a great track that Codger submitted I bet you’d know which it was even without the introduction from Ro!

Coming up on Monday is 312, hosted this week by Rich Palmer of Audio Gumshoe.

On Friday I was invited to Stowmarket, here in Suffolk, to celebrate a landmark point in the development of the creative arts centre that bears John’s name. The centre urgently needs to raise £25,000 in match funding by Christmas.

That’s not long (just over three weeks) but, by casting the net wide, it is possible. An Angel Shares crowd funding campaign has been set up for exactly that purpose. It is open now and will end on Christmas Eve.

Whether for yourself or as a gift for someone else who “got” John Peel, Angel Shares are a brilliant idea. There are a variety rewards for people who contribute to the appeal.

You’ll find all the details at http://angelshares.com/projects/23/the-john-peel-centre

Here’s a short video about the centre.

Sampeace Brown who was originally born in Nigeria – West Africa with a population of about 150 million people, started his artist career at the age of 14 . Sampeace Brown grew up in a big family where singing and listening to pop music and traditional folklore was part of the daily rituals and way of life.

Now he is based in Oslo, Norway and has a new album (Bridge of Hope out now on Street Solid-T-Kay

With over 70 #1s across the US and UK, Marc JB is one half of remixers/producers BIMBO JONES

I first heard this track on a delightful BBC Radio 4 programme a couple of weeks ago which my chum Sally Jackson-Freeman had told me about. Her grandfather was Jack Jackson, who was a renowned trumpeter and bandleader but also a pioneering radio DJ who strongly influenced the style of Kenny Everett who said of him “He was the first person to have fun on radio.”

The programme explores his legacy closer to home, through the lives of three generations of his family who are all involved in music.

Sally got hold of this Marc JB track for us (for which I’m very grateful). I didn’t realise when listening to the programme but it features the music of his grandfather – now that’s just a bit special eh?

You may still be able to hear the programme athttp://www.bbc.co.uk/programmes/b0169255

Thanks to everyone, the artists, managers, labels and publicists who send me stuff and particularly to you, the listener who does me the honour of listening to this quirky old show and even expressing your appreciation now and again.

Thank you. You are appreciated too.