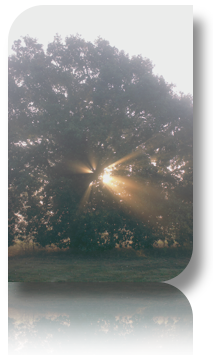 In the final run up to CMJ, a slightly shorter show than normal again. A certain amount of powder needs to be kept dry – for next week. We’ve tracks from a few bands that I’m hoping to catch next week and another who I’d be very happy to go and see in their home city of Barcelona.

Mists and mellow stuff across the field from the barn this week.

Poison Song is on Lily And The Parlour Tricks’ upcoming self-titled album, slated for release October 18, the kickoff day for CMJ 2011.

Lily and the Parlour Tricks started off like many other bands – while finding her niche in writing music, Lily Claire (lead vocals) met and instantly connected with Terry Moore (drums), Brian Kesley (bass) and Angelo Spagnolo (guitar) and formed a band. But it wasn’t until Morgane Moulherat and Darah Golub joined the group to create the amazing three part harmonies Lily had dreamed about, that Lily and the Parlour Tricks were finally whole.

“When you play well with others, you know it instantly and you don’t want to stop. It was just evolution from there on out,” says Lily. And evolution it was. After the band was fully developed, their live show transformed into something truly one-of-a-kind.

With influences such as Elvis Presley, Tom Waits and T.Rex, it’s no surprise Lily and the Parlour Tricks’ sound oozes the sexiest retro rock to come out of New York in a long time. The band draws from all of their musical backgrounds to create a sound unique to only them. And with the band members hailing from New York City to Pittsburgh and Detroit to Paris, France – they are just as eclectic as the music they create.

Gadjo takes you on a wild journey from the middle of a jumping ska-mosh pit into the brassy arms of a drunken fanfare. After waltzing a chanson francaise under an African sky, you’ll tumble giggling into mediterranean streets for a bit of salty swing. Then, bewitched by love songs, you’ll dance yourself dizzy at an all night Balkan wedding party.

From all corners of the world they tumbled into the streets of Barcelona in 2003 and have been together ever since writing their original blend of polyglot balkan-ska-swing music. Since then, Gadjo has produced three albums, attracted a huge international following and has toured Europe extensively playing in theatre, circus and music festivals; up trees, on barges, in bars, beaches, on horse-carts, on top of trucks, in clubs and castles.

Adam Colthorpe wrote about Sofar Sounds (SOngs From A Room) and very slick operation it seems to be too.

The problem for the “listening audience” and indeed the artist whose work requires more listening than simple foot tapping.

House concerts seem to offer a great way to hear interesting new music – admittedly, it will tend to be acoustic but there’s enough variety within acoustic to last a lifetime.

The norm is that the audience will really listen to the artists. A room full of people not talking is a powerful phenomena, add to that a human voice raised in song and expressing something worth saying and you have a recipe for a spellbinding atmosphere in which the music takes on a heightened capacity for direct communication.

Have you attended, hosted or even played at a house concert, how did it work for you? Let me know, just as Adam did by email topeter@suffolkandcool.com

EULA is a 3-piece outfit from New Haven, CT. Nate is the pants, Alyse is the blouse, and Jeff is the cumberbund.

They taste like post-punk-pre-historic-medium-gauge-no-wave, with a splash of lemon.

Released this past May, “Maurice Narcisse” is a playful treatise on pretension, part lamenting part castigating the metaphorical ‘character’ for his egotism. Alyses’ punching lyrics find their match in aggressive drums and plunging melodies, so despite the aforementioned woes, Maurice Narcisse is an undeniably fun listen. Give a listen to the record’s titular track, a smoldering, discombobulated pop song that EULA has made their specialty. It’s indubitably technical and well-crafted, every detail fired off with conviction and purpose.

Formed in Copenhagen, Denmark in 2006, The Foreign Resort is anything but conventional. Described as “The Cure embedded in noise with Tears For Fears-ish melodies and the energy burst of Joy Division,” by Gaffa Magazine (Denmark), this description is as accurate as it is flattering. Crystal-solid performances are always a guarantee at one of The Foreign Resort’s shows, and this EP is a glowing representation of that. The marriage of New Wave, Shoegaze and Post Rock has been achieved with sheer perfection on this five song EP.

The Foreign Resort will be returning to the States in October, playing a number of dates on the East Coast that will culminate with a showcase at this year’s CMJ Music Marathon and Film Festival. If you’re going to be there it on Tuesday 18th at Lit Lounge on 2nd Avenue in the East Village. The album is slated for release next month.

In the Spring of 2010 Canon Logic released their first full-length effort, FM Arcade. An eclectic album of powerfully catchy pop songs, FM Arcade is threaded together by an undercurrent of dark tension that bubbles to the surface on stand out tracks like Nights at Armour Mansion and Dead Man. The band – comprised of guitarists Mark Alu and Josh Greenfield, bassist Sean Enright, drummer Zach Jordan, and frontman and principal song-writer Tim Kiely – achieved growing popularity in their native NYC.

Join me next week in New York. I’m hoping to be posting daily reports through the AMPed feed. You can listen and subscribe free of charge at http://musicpodcasting.org