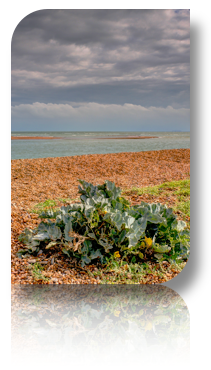 An uncommonly short show this week. I rather suspect that there’s a natural lull in labels and artists getting the music out during the height of summer – at least here in the northern hemisphere. I really didn’t want to fill the space with not so hot stuff. You deserve better.

After recording this afternoon, a chillin’ walk by the bleak coast at Shingle Street. I think the plant is sea-cabbage – probably a short succulent 😉 Any corrections?

Átila was born in Brazil, then moved to the UK for the last third of his childhood, went back, then to Portugal, then Swizerland. He says “It’s easy to feel at home in Geneva, everybody else is a weird third culture kid like me!”

A one-man band, a Brazilian with a Scottish/English/American accent living in Switzerland. Weird, huh? It gets even weirder when you learn I have a PhD in Particle Physics… hey, Brian May has one now too!

Thanks to Rosie Shuster for putting me onto Átila and for the backing vocals!

Minneapolis’ Caroline Smith & the Good Night Sleeps release their latest album Little Wind this coming September 20th. The new work sees the band still rooted in folk rock, but expanding their sound into contemporary indie rock. The catchy hooks thankfully remain, but broadening their approach seems destined to win the group a new set of fans, while keeping their old ones quite happy. Smith said of the new album, “This record took a lot out of us as a band. We were in a huge transitional period when we were writing these songs and still not completely comfortable with any of them when we finally went into the studio. But because we were so unsettled with everything, the songs and the band, the record means so much more to us now because we got to see it all come together in front of our eyes and turn in to something we are all so proud of.”

CMJ really is an amazing crazy and frantic event in which you’ll be awash with music of every style performed live in all the iconic music bars and clubs of New York City.

The full badge costs $455 for the week which gets you into pretty much everything including the music industry panels, parties and the Film Festival.

If you just want to catch the music, the show pass is $149. New for 2011, this pass allows access to all CMJ Music Marathon showcases and Film Festival screenings.

From the album: The Black Seeds Specials: Remixes & Versions from Solid Ground

Since forming in 1998, the Wellington-based 7-piece have been winning over fans with their unique blend of reggae, dub, funk and soul, carving out their reputation on the strength of their critically acclaimed studio albums and legendary live performances.

This album takes the opportunity to present songs from The Black Seed’s album Solid Ground in a new light and encourage experimentation by giving a range of artists, producers, and MC’s – some established, some up and coming, from New Zealand and around the world, a chance to put their take on a ‘Seeds’ song.

It was also an opportunity to officially release some further Solid Ground material, and dub and acoustic versions that were recorded during the album sessions.

The end result is a 14-track digital album which mashes up our Solid Ground LP into a huge range of styles and genres – from funk to dubstep to acoustic to electronic and back again. Some tracks have a more familiar ‘Seeds’ sound to them, while some come totally out of left field.

Fast making a name for themselves on the international Dubstep scene, NZ based trio Truth have been receiving vast DJ support from the likes of Mala, Hatcha, and Skream, as well as airplay on the BBC’s Radio One, and Kiss FM. Four of their tracks will soon be released on Skream’s label Disfigured Dubz. Check out their amazing bass-heavy rework of ‘Slingshot’. For more about Truth visit: www.myspace.com/truthdubstep

AMPed 297 this week is hosted by Ro Cutler of DarkCompass.comYou’ll find a player in the top left of the home page at

We met up last weekend in London to mark the arrival in London of fellow AMP member Erk from Chanel Erk in Sydney, Australia. Any excuse for a podcrawl with a bunch of the more southern and eastern based music podcasters. There are plans for a north western meet up while Erk is in the UK.

Next week Rodrigo is back in The Azores Islands to present 298.

Preparations are underway for a rather special AMPed 300 in a couple of weeks time.

No One’s There – Anika (Berlin via Bristol)

Living between Berlin and Bristol while working as a political journalist and music promoter, Anika met Portishead’s Geoff Barrow through a mutual friend. Raised by music loving parents, Anika spent an early, brief part of her childhood in Germany. By the time she was 16 she had already bought shares in her family’s music festival in Haldern, met Patti Smith and was dreaming of a life making music.

As a teenager in the UK, her appetite for discovering new music and being a musician became irrepressible. Post college degree and looking for like-minded musical souls in Bristol, she met Geoff and his band mates Beak>. The following week Anika and her “new band” went into the studio to begin recording ANIKA’s debut album. Anika was recorded live in 12 days, with the four of them together in one room and no overdubs. The resulting collaboration is a political/trashy/discordent/reggae/ German/old school Bristol/punk-funk sound – all sown together into a collection of classic, bristling songs infused with other-worldliness. The raw emotion in the tracks makes it an experience in uneasy easy listening.

Still only 23, Anika’s sophisticated music is likely to draw comparisons to Marianne Faithfull during her post-punk/dub Broken English period and Nico during her halcyon days, Anika is sure to make an indelible impression on the music world. Not a bad start for a new talent whose album was no more than an idea just a year ago.

After extensive touring throughout the U.K. and Europe, Anika finally embarks on a long awaited tour of North America this autumn / fall. Flanked by key appearances at the Portishead-curated All Tomorrows Parties in Asbury Park, NJ and MoogFest in Asheville, NC.