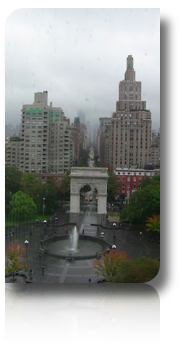 Oh boy. The connectivity problems and hectic schedule of CMJ have conspired against the full programme I was hoping to bring you this week. As a matter of academic interst the show was recorded in a corridor at the NYU, edited in a bar near Washington Square and uploaded via the wifi at Sarbucks opposite 59th St – Columbus Circle subway station following the press mixer party at the Hudson Hotel. The week has gernerally been fuelled by the magnificent Third Rail Coffee

I hope you get a feel for the music overload that CMJ is. From morning panel sessions at one of the NY University buildings overlooking Washington Square to late nights running between venues such as Arlene’s Grocery, Rockwood Music Hall and The Living Room it’s all rather exciting and very tiring. The shrieks of delight on all sides when face-to-face contact is made with people you’ve dealt with for years is a delight.

The fact that it is all set in one of the greatest cities I’ve ever come to know (a bit) and the friendships that have developed is a real bonus. Despite the rain today. There is supposed to be an Empire State building up 5th Avenue but it wasn’t visible in the picture taken from the panel session room.

Special thanks to Todd Murphy, The Jazz Lawyer and his family for their generous hospitality this week. It has been a real eye-opener to discover that parts of New Jerrsey are just eye-wateringly beautiful.

The City and Horses at www.thecityandhorses.com

I’ll update the shownotes as soon as I get a chance.