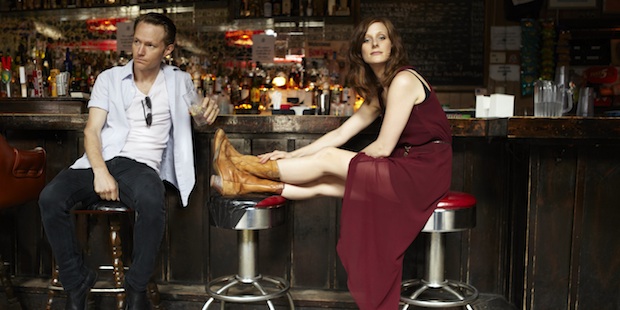 Whitehorse are among the diversity of artists this week. Watch out for them live.

A pleasing variety of tracks on this week’s show … again reflecting the best of independent music from around the world in in this week’s show specifically from LA, Nova Scotia, Ontario, San Francisco, New York, Lyon, Edinburgh and Marseille.

The current single from their new EP Breathe.

There’s a reason L.A. has become synonymous with making your dreams come true. Hollywood and the Sunset Strip having been cranking out stars for more than a century, whether purposefully or coincidentally, and new discoveries come every day. Take the case of Ari Welkom, discovered as an actor before teaming up with guitarist Fabien Hameline on a movie set. The two realized their shared interests and respected talents could lead to a different kind of artistic avenue, and they first formed the musical act Ghost Robot in 2009. While that moniker’s cuteness dried up pretty quick, they eventually recruited drummer Adam Timmerman and bassist Sebastian Hameline, Fabien’s twin brother, for the full line up of what is now Cosmic Suckerpunch.

At first holed up and honing their chops in coffeehouses and small clubs, the band’s popularity grew in the city of angels and they soon graduated to historic venues like The Viper Room and the House of Blues.

The group plays up a sparkling tongue-in-cheek science fiction vibe throughout their otherwise straightforward music, with themes like robot love and time machines popping up regularly and Welkom often adopting a Ziggy Stardust like swagger when he endearingly croons and stutter-starts his lyrics.

For me the whole thing has a retro freshness about it that I find quite endearing.

What a treat to have a brand new EP from Tim Crabtree (aka Paper Beat Scissors) not just to play on the show but, I promise you, to listen to for the pure pleasure.

Tim sent the tracks over last night and at first listen to this live recording of Tendrils it was apparent that he was really exploring (and making masterful use of) the acoustic of St Matthew’s Church in Halifax. Recorded during the Halifax Jazz Festival, the EP is now available on 7″ vinyl.

The show included collaborations with NY-based contemporary classical group Clogs, sometime-members of, and regular collaborators with the National.

A-side Tendrils, a haunting contemplation on what lies just below the surface, finds new life with the added instrumentation of oboe, violin, steel drum and guitar, and features support vocals by My Brightest Diamond.

B-side, Onwards is a previously unreleased song performed with a chamber ensemble of Gina Burgess (violin), Devin Wesley (oboe) and Anna Plaskett (french horn). Building on the success of the critically-acclaimed self-titled album, Tim Crabtree sounds as unique and focused as ever in these new sound environments.

Paper Beat Scissors will be touring throughout Europe in support of this release, also available digitally as a 7-song EP.

May 13: London, UK – the Slaughtered Lamb

With The Fate of the World Depends on This Kiss, Whitehorse makes good on the promise of the their self-titled debut, which officially brought their solo careers together. They made their entrance as a band in August 2011, with an 8-song collection that played to their strengths with equal parts blues-stomp and ballad, seedy tale and sweet nothing. The new album “freewheels between blues, folk and rockabilly with audible enthusiasm for experimenting with new sonic directions.

Luke Doucet is known for his scorching work on his signature Gretsch White Falcon. As noted in Guitar Player Magazine, “whenever and wherever Luke Doucet hits the stage, he wrestles every last ounce of Neil Young-battles-Brian Setzer twang out of his gleaming cream-and-gold companion.” Doucet’s most recent solo release, Steel City Trawler, attracted four-star reviews across the board, as well as a Juno nomination.

Individually, they have been recognized with awards and nominations from the Juno Awards, Polaris, Canadian Folk Music and Independent Music Awards. So with two strong solo careers, why Whitehorse? The theme of tempting fate appears again when considering how much the stakes have been raised: “We’re kind of breaking one of the cardinal rules. We’re getting away with murder. This isn’t supposed to work. It’s supposed to end in a hail of bullets and tears,” Doucet has said.

They are on the road right now with upcoming dates:

The title of The Fate of the World Depends on This Kiss comes from a Wonder Woman comic glued to the table in a diner in Vancouver, BC.

Jeremy said of the song-writing process “It has been a labor of love, to co-exist with each song from concept, through maturing versions, and finally finished piece.”

“I would start each song thinking, this is going to be a simple song, just guitar and vocals, maybe some drums, but after recording the first layers I would go back and add other textures like cello, keyboards or vocal harmonies, while still trying to leave space in the song,” Jeremy said.

Jeremy’s sister Vera Gekov also shares vocal duties on two songs. Jeremy explained “I remember when we were kids, and I couldn’t stand her singing all the time, but either she got better, or my taste improved, because we work well together now.”

A really interesting, mesmerising piece from Peg Simone and Agathe who collaborate between NYC and Lyon as Peg explains:

“She and I were both artists on Radium/Table of the Elements and talked about collaborating a couple of years ago during the Table of the Elements Festival which was held in Brooklyn. She lives in Lyon, France so we did this by sending tracks back and forth. More to come at some point. I’ve cc’d her on this so you can contact her if you like. Be sure to check out her work, it’s beautiful.”

Agathe has a new album called Dangerous Days. You’ll find it at

Peg herself also has an intriguing album out right now, Witch Tree Road is available for listening and download from her site. We’ll have track from that next week.

The Witch is dead … and almost buried

If you’re taking any notice of the sycophantic dribblings coming from all the main-stream broadcasters in the UK (and possibly seeping overseas too), you’d think that the nation is standing with heads bowed at the demise of the Wicked Witch. Don’t you believe it. Despite the almost universal uptake of rose-tinted shades by people with either vested interests in supporting Thatcherism (mostly because they did very nicely out of it thank you), there are lot of us who just want to go on record and say that the £10m funeral show that she had planned is not in our name. Nor, I suspect in the names of many of the servicvemen and women being required to honour a politician who many will despise.

I take back my criticism of the BBC whose refusal to play the number 2 song in last week’s chart show was a masterclass in hyping the whole thing up. Their explanation of why they wouldn’t play the track lasted way longer than the track itself, which, if they’d just have played it might have raised the odd eyebrow but not much else.

She’s gone, but her cronies are still active. Be afraid, very afraid. No, actually, that’s how they keep us under control, by creating fear. Don’t be afraid, let us rejoice, have a bit of a party and stand up for the memory of those, well away from her leafy suburban constituency, who she consigned to poverty, depression and social decay. Such as the people of the former mining town of Spennymoor, County Durham here in the UK.

The Mines of Spennymoor – The Deadly Winters (Edinburgh, Scotland)

Releasing their debut album in 2011, The Deadly Winters are steadily ploughing a fresh furrow into the term alt-folk, and honing their live performances into something quite magical.

Picking up play on BBC Radio 1, BBC Radio Scotland, Jim Gellatly’s Weekly Podcast, Amazing Radio and numerous internet stations and Podcasts from the UK to Australia, the band are steadily raising people’s awareness of how Folk-Music can still advance with the times.

Live, the band have supported The Staves as well as appearances at Celtic Connections, Perthshire Amber (Dougie MacLean Festival), The House Music Folk Festival (Kinlochard) and The Edinburgh Fringe Festival.

There’s a video of that track in the shownotes.

Are You Steady – SHAN A SHAN (Marseille, France)

No information available on Jamendo just this tremendous album of French dub and another from 2010 that I’ve not had a chance to listen to yet.

You could try listening on this Jamendo player – although it may well not work on i devices. There are direct links to the albums on Jamendo below.

This spring Lowtemp put out its first full-length release, Gramatik’s new album The Age of Reason.  Gramatik elaborates on the epic LP title, which was “inspired by a stand-up segment by comedian George Carlin. He made a joke on the fact that he was Catholic until he reached the age of reason. I also firmly believe that there comes a time in a human life when you reach the so-called ‘age of reason’ and realize that there are so many irrational beliefs, shameless contradictions and illogical restrictions inflicted upon society. Some people reach it sooner, others later, but a majority unfortunately never do. [Through my music] I’d like to guide more people to reach the age of reason sooner. Maybe. Or, hopefully at least unite the ones that feel the same way.”

The Age of Reason Tour kicks off April 2013 with dates in St. Louis, Urbana, Madison, NYC, Austin, and more.

The first single off The Age Of Reason, “Bluestep” is a signature Gramatik style genre clash.

“Lately I’ve been really into combining the vibes of raw 50’s and 60’s Blues with all kinds of EDM genres and one of the results is Bluestep. It’s a dynamic mixture of Blues and Dubstep, a plethora of screaming guitar, howling vocals and big bass, capturing the raw energies of both music worlds in a hopefully cohesive, possibly outrageous picture.”

Age of reason or reason enough, the revolution begins now.

The single is currently available as a free mp3 download and as a 24bit file which weighs in at an impressive 74MB from: