Naja Rosa has been touring since before she was born. Looks as though the tour bus has too!

As the snow again falls on Suffolk in the middle of Canadian Music Week, it’s only right that we should feature a light sprinkling of Canadian artists and take a brief look forward to a couple of massively contrasting warm weather festivals here in the UK this “summer”.

Danish singer/songwriter Naja Rosa’s sound may be reminiscent and with the spirit of the Rock-ish Blues 60s and 70s, but unmistakably renews a classic blend of rhythms to make them relevant to new ears of today. Similar to the moody sound of a Tarantino soundtrack, giving remembrance to the likes of Stevie Nicks and Janis Joplin her vocals are deep, soulful and pure.

Naja Rosa and her band are well known for their staggering live performances and they’ve toured massively hitting stages from Copenhagen to NYC.

A child of music, Naja Rosa, was born into a family of many songs and stories. Her mother and father, Annisette and Thomas Koppel, founding and leading members of the legendary Scandinavian Psychedelic Rock group “The Savage Rose,” took her on the road before she even landed on this planet earth. Growing up in the south harbor of Copenhagen, Naja was singing and writing songs from an early age and went on touring in her parents’ group for almost a decade.

Naja Rosa’s second album “The Place I Call Home” (2012) was recorded partly in Copenhagen with her band. After building a small studio into an old mobile home she went on a roadtrip through the southern states of the US, to record local musicians onto the songs. Because as she says: “I’ve always been very much inspired by the true, honest, soulshakin’, heartbreakin’ and raw music that has come out of there for many many years”.

From Austin-Memphis-New Orleans-Atlanta, Naja Rosa managed to record with musicians throughout the south such as the legendary New Orleans Blues singer Coco Robicheaux, who unfortunately passed away shortly after the recording, making it his last album appearance. She also recorded with members of Hot 8 Brass Band in New Orleans, Austin local banjo extraordinaire Dustin Welch, and a gospelchoir with Outkast producer “Mr DJ The Producer” at his Camp David Studio in Atlanta. As well as collaborating with many other great artists along the way.

Yes, with SXSW over, everyone up-sticks and heads for Toronto for Canadian Music Week which started yesterday and goes on until Sunday. Of course, as well as the music there is a full conference programme and I understand that Pledge Music, through which quite a few artists raise funds to release albums, etc. –  a bit like Kickstarter, is announcing that they’re opening up shop in Canada. Line-up below.

It’s a while since we heard from Leif Vollebekk on the show. The first of two tracks is taken (well, borrowed) from his 2010 debut album Inland. This is an accomplished and exuberant offering including the hauntingly beautiful Don’t Go To Klaksvik which you can hear on SnC show 194 back in November 2009.  Sorry. The shownotes are still a mess but you can play the audio.

Off The Main Drag – Leif Vollebekk

After his 2010 debut Inland, Vollebekk knew the kind of album he wanted to make next: a record like the ones he loves by Gillian Welch or Ryan Adams, that feel old and familiar even when they’re new. But also a record that speaks to the listener through its lyrics, with songs “that can hold up in a storm,” that are packed full of perfect little mistakes.

He spent two years searching for perfect takes.  This search took him from his home in Montreal to a studio in Manhattan, from a farmhouse in Woodstock, NY to a mansion outside Paris, and the result is a dusty, polished, new, old record called North Americana -Ten songs, the best Vollebekk has ever written, with lines about love and the end of love, about journeys and homecoming, about the death of friends and drinking yourself dry.

The heart of the songs was always recorded live, to tape. Old school, spontaneous, one real captured moment.

North Americana took years. “All this time,” Vollebekk says, “trying to get one take.” But the result is a beautiful, alive, human – shambling ballads, noisy folk songs, vivid portraits of a 27-year-old’s watercolour life. “I feel like I created a record from 1970… something that no one’s heard before,” Vollebekk says. “I’m haggard and this record is all I got.”

Latitude’s main stage line-up at Henham Park, near Southwold, here in Suffolk has been announced and headlining on the big Saturday night are exciting break-through artists err… Kraftwerk. Nothing much from them since their Tour de France Soundtracks album from ten years ago which was a late flicker after Electric Cafe in 1986. Perhaps it’s something of a one size fits all festival for everyone. At least for everyone who can afford £196.50 – but that does include a square of grass for you to park your tent.

Ah well, I suppose it’s great for those that like that big festival vibe. Current line-up below. 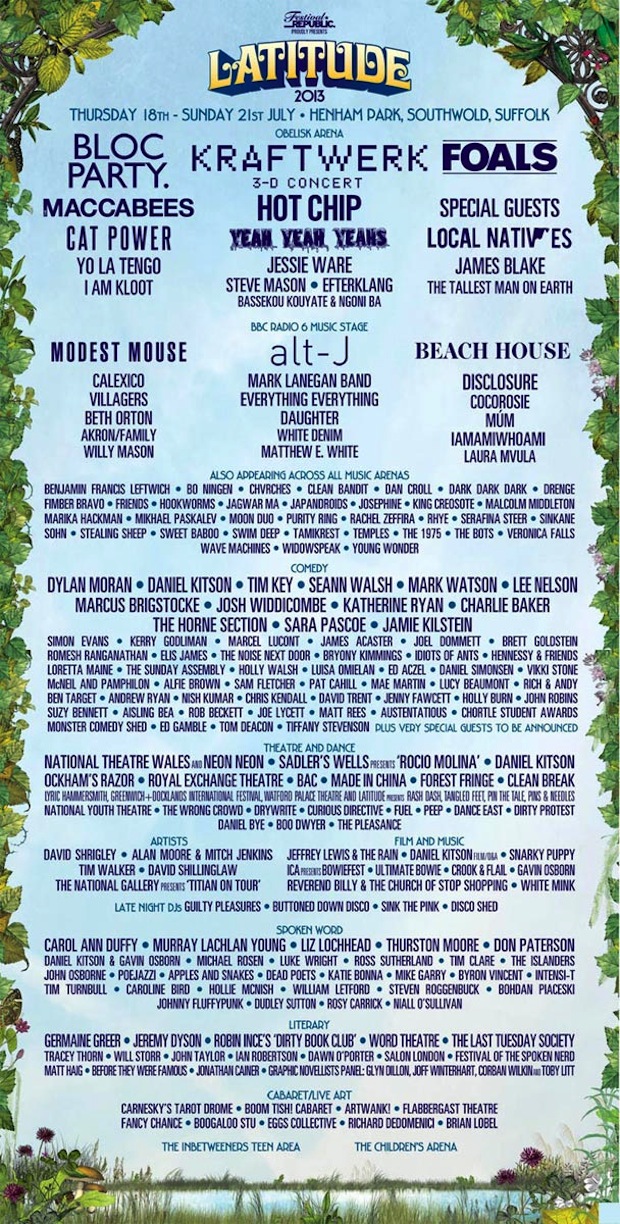 One In A Million – Christian Gibbs (Brooklyn, NY, USA)

Indie folk singer/songwriter/guitarist Christian Gibbs will soon head out on the road to tour the United States in support of his forthcoming album, SLEEP THE MACHINES.  Gibbs will be travelling from date to date in an RV with his wife and two young children in tow, further cementing his roles as both working musician and involved parent.  Gibbs and his wife will be co-authoring a book about life on the road as a family.

SLEEP THE MACHINES is due out on March 26th in North America and is the first acoustic album for Gibbs under his full name.  The album is his most stripped-down, personal work to date, relying on the strengths of his noted songwriting ability.  Inspired by Gibbs’ journey coming to terms with fatherhood, SLEEP THE MACHINES is produced by Andrew Hollander (“Sleep Walk With Me”) and was recorded live with just vocals and guitar.  The album also features guest appearances by Cat Popper (Jack White, Ryan Adams) on vocals and bass and Jon Graboff (Willie Nelson) on pedal steel.

A Brooklyn-based songwriter by way of San Diego, Christian Gibbs has released more than 10 albums under a variety of names, including Lucinda Black Bear and C. Gibbs.  His projects have flirted with many different genres from indie chamber psych folk to the darker leanings of Americana.

9 Portland, OR The Laurel Thirst

TGE gets underway on 16 May and will be the usual blast of interesting up-and-coming artists being eagerly scoured by agents, managers, labels, promoters and certainly two independent music podcasters of my immediate acquaintance. Yes. Mr Cogle and I will be on the lookout for interesting new music to bring back for you. Our ever vigilant minder Grumbler will be there making sure that the supplies of beer and kebabs are maintained.

If you could face joining us you can still (but only just) pick up an early bird ticket which gets you into 30 different venues to see 300 artists (well you could try) for £57 including fees – but you have to find your own grass. 😉

2012 was a non-stop year for The Balconies who released their Kill Count EP (Coalition/Warner) in February along with a music video for the title track. What followed was a flurry of touring including festival stops at the likes of South by Southwest in Austin, TX, Summerfest in Milwaukee and back-to-back dates at Edgefest and Ottawa Bluesfest.

Their touring didn’t stopped there with recent dates in New York City alongside U.S.S., the pleasure of opening for Sam Roberts Band at Jackson-Triggs Winery, and Ontario dates with Los Angeles-based group The Aggrolites.

The raw energy and charisma that comes from frontwoman Jacquie Neville backed by Liam Jaeger on drums and brother Steve Neville on bass has left audiences on the western side of the Atlantic Ocean in awe.

The thoroughly good news is that they are coming over to Europe in a few weeks when they’ll be playing the Great Escape festival in Brighton, and I shall be seeing them.

Describing themselves as “the finest purveyors of Balkan music this side of a Lada scrap heap” the Budapest Café Orchestra return to the John Peel Centre to see if it has changed since their last appearance.  We think they might just spot the difference!

Marla Mase is a writer/performer/producer/singer/songwriter from New York City. She writes songs, plays, monologues, short stories, erotica, blogs, and poems. She is known for her gutsy, sexy, raw performance style and her intelligent lyrics and is regarded by her peers as being a true musical pioneer.  Her songs, a mix of world beat, spoken word, funk, r&b, punk, soul, and classic rock-n-roll are infused with GLOBAL SOUL, the signature sound of  Tomás Doncker, her guitarist, co-writer  and producer . She is backed by his band, the Tomás Doncker Band.

Best of all, Marla is in the Uk for a few dates very soon:

Norfolk, VA native, Suburban Living is back with a new-wave flecked dream pop single, to be released on April 16th (Dialog Records). The one man project of Wesley Bunch weaves shimmery shoegaze with new wave textual synths and reverb for that blissed out sound evoking wistful abandon of youth and endless nights.