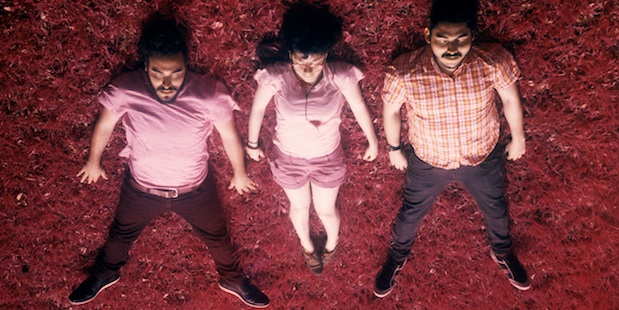 Tilting at a slightly different angle in Venezeula are Holysexybastards, on the show for the first time this week.

A smattering of lurv songs close out this necessarily rather short edition on the eve of Valentine’s day. LA asserts itself as a music centre this week although Sunderland and Bromley well represented and we have a track from Venezuela too.

What a great night at The Brewery Tap in Ipswich on Sunday.

A great pub and getting KCC to play has been a long haul for Mike and Georgie. He’s invented more than one new festival in the hope of attracting them up. The Oyster, Stour and Black Pudding Festival last weekend was the clincher.

Despite being thoroughly fed and watered, they put on a great show which delighted a packed Tap. A long, long set took its toll on Julia’s voice. The most remarkable phenomenon was making sense of the mental disconnect between eye and ear watching super slim elfin Bethan laying down a super resonant bass line on the tuba.

The track is from their album One, For Words.

Come on in my kitchen – Michael Colton (Los Angeles,CA,USA)

Michael Colton started playing guitar as a teenager fired up by the masterfully expressive approaches of blues-based players like Stevie Ray Vaughan, Jeff Beck, and Eric Clapton. He first heard Robert Johnson in eighth grade, seeking out this Holy Grail on vinyl after reading an interview with Eric Clapton where EC gushed over Johnson’s blues genius.

The legend goes that in the 1930s Robert Johnson was just another mediocre guitar player hanging out at juke joints, but after a brief disappearance, he remerged on the scene dazzlingly proficient. The explanatory myth is that Johnson sold his soul to the devil at the crossroads in exchange for his mind-boggling technique. His 1936-1937 recordings have been the blues gospel for countless generations.

Trevor is just back from LA, where he’s been playing gigs and won the Artists In Music Awards ‘Best Blues Artist’ Award. As Tevor says, “a fantastic event and we are still buzzing from it. Loved playing in America and will hopefully be back in Los Angeles later in the year.”

Very much in the tradition of early Eric Clapton and Freddie King, Sewell has his own inimitable style that coasts easily between traditional values and the confident and almost nonchalant style that he has recently become known for.

Trevor has a limited edition CD out now on W.A.R. Records (an Austrian label) which is basically the Calling Your Name album plus four bonus tracks including this fascinating monitor mix for a duet he’s recorded with Lorraine Crosby (best known for the Meatloaf hit “I would do anything for love – but I won’t do that”.

Trevor has put together a special package of three tracks from the new album, especially for Suffolk ’n’ Cool listeners. You can download a zip file containing the tracks Where the Wild Ones Go, Hate Me for a Reason and Condemned.

Click this link to pick up your copy of Calling Your Name, quite free and legal.

That’s a very generous offer and I hope you’ll visit his site to join the email list (on his home page) to be among the first to hear about his new album and other news.

‘Rooftop Lover’ tells the story of BETS and her song-writing partner spending their days lounging on a rooftop in Hollywood, writing pages upon pages of songs. Despite hints at romance via the song’s name and BETS’s sultry retro vibe, friendship and sunny weather are the main themes for the song. The strumming of the acoustic guitar and ocean sounds mixed with the delicate lyrics lend to a delightfully charismatic song that has a distinctive sway to it.

The phrase “garage rock freaks” defines HolySexyBastards.  With mouthfuls of punk, hard rock, stoner rock, blues and bad attitudes to spare, they began and indeed continue as a power trio from Valencia, the industrial capital of Venezuela.   They were also recently awarded the most prestigious title for a band in Venezuela as the recent winners of the New Bands’ Festival for 2012.

Subsequently they have been selected to play showcases at SXSW 2013 as well as Canadian Music Week, both taking place in March.  They will be bringing their set-list-free post-hardcore anarchy to cities across North America and in Europe beyond that.

Their self-titled debut is released at online stores including iTunes and Amazon from March 5.

Originally hailing from Athens, Ohio, the band honed their chops in open jams and bar gigs, experimenting with tight improvisations and a regularly rotating set list, before moving to Los Angeles as a unit in 2008.

Everyday Animals’ latest LP Under the Tyranny of Good Weather finds the band marrying diverse influences and incredible musicianship into their most cohesive collection to date: a sprawling, funky excursion into the mind of lead singer and writer Kevin Shima.

For me it’s rather redolent of some of Robert Palmer’s music.