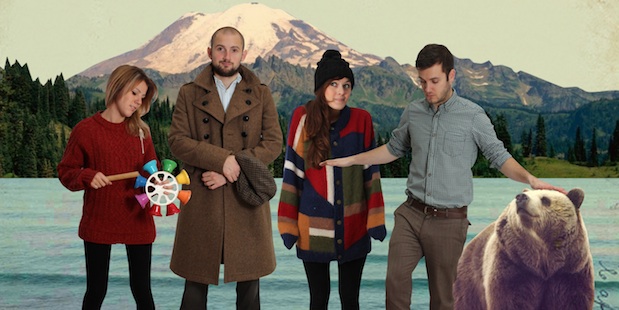 Keston Cobblers Club have a show coming up on Saturday at The Brewery Tap in Ipswich, here in Suffolk.    See you there?

Perhaps a bit of a trippy feel to some of the tracks this week including some valuable lessons in the joys of stereophonic recording from Public Service Broadcasting. The twin Graces are Grace Valhalla and Grace Woodroofe who are actually back to back. We’ve another track from a band I’ll be seeing on Saturday and a love song with a different, and very resonant perspective.

Thanks, as ever, to the independent artists and labels who are producing all this fascinating music let’s support their efforts buy buying the stuff we love.

Oh joy to have those awfully nice young coves from Public Service Broadcasting beaming their charming ditties into our lounges again, this time in steereo. Simply marvellous chaps, top hole. We don’t hear enough voices like that on the wireless anymore.

Public Service Broadcasting are a London-based duo whose main ingredients are:

2) Wrigglesworth on drums, pianos and other electronic things.

Taking samples from old public information films, archive footage and propaganda material, they teach the lessons of the past through the music of the future.

Anna Nelson, known by her stage name Moxi, is a songwriter and performer from Los Angeles, California. After a short stint as a solo artist, Nelson teamed up with producer, writer, & multi-instrumentalist Andy Toy and took the stage as Moxi for the first time in late 2012. Floating on a soundscape of vintage keyboards, big backbeats, and her signature Omnichord strums, Nelson’s distinct soprano voice takes the listener on a wistfully introspective journey with her dreamy lyrics and melodies. Collaborating with Emmy award-winning producer and songwriter Bobby Hartry, Moxi is slated to release her debut EP In My Dreams in early 2013.

Tyler Demorest, Danny Schnair, and Matt Cohen, known collectively as Kiven, hail from the smog-swept city of Los Angeles. While their musical influences have undoubtedly come from a wide array of musical and artistic spectrums, this trifecta ultimately blends together to create the band’s unique and personal sound.

The band released their first EP, Two In The Same, in 2010 while still studying in school, and then followed with STEP in the spring of 2012.

Following the initial momentum and direction of sound from STEP (their previous EP), the recently released EP, “1840” continues to progress forward both sonically and emotively, reflecting Kiven’s musical and personal growth. The tracks off of 1840 build in a more organic sense and with a naturally touching pull on the listener with pocket drums, grooving bass lines, hard hitting guitars, soaring vocals and lush harmonies.

With the excitement of their new single, “Hope & Smoke”, which reached #11 on Hype Machine and was featured on Indie Shuffle and Red Bull Soundstage, Kiven made their East Coast debut in New York for CMJ 2012 as an official artist – playing a handful of showcases including The Deli Mag, Audio Perv and a handful of other buzz-worthy CMJ bills. Shortly after, Entertainment Weekly went on to name Kiven as the #2 “Great Indie Discovery” from CMJ 2012. Their debut full-length will be out in Spring 2013.

We had a first track from Keston Cobblers Club last week and if for no   other reason than that they have a local (to me) gig coming up at the end of the week. Here’s another.

They’re playing at The Brewery Tap in Ipswich, here in Suffolk on Saturday 9th Feb headlining the “Stout, Oyster and Black Pudding Festival” along with Straw Bear, Hot Feet, Jasmine Ava, Underline the Sky and Phil Jackson. Entry is free. Check the details at www.thebrewerytap.org

A Canadian-Ukrainian duo comprised of Alexander Kretov and Shauna McLarnon who is originally from Whitehorse, Yukon in northern Canada. As are previous guests on the show Old Time Machine. She is apparently addicted to Russia and Ukraine, so she has lived there for about 12 years.

Ummagma was nominated for CBC Radio Canada’s “Rookie of the Year” Bucky Award and was featured in the November issue of Rolling Stone Russia.

Another track from Grace Valhalla’s seminal 2006 album Peak~. Every track on this album is pure musical gold.

As Mad Cat puts it: “She faces the same fate as many women producing music: no one believes she produced it. Of the two albums she produced the first Grace Valhalla – psychopathethic is more a rock album while the latter Grace Valhalla – PEAK~ is clearly electronic. Both containing calmed down nearly melancholic music. Wire is a mix between the two first albums”

Then there are Summer Camp and last year’s Valhalla Rising.

The French artist has a new track available on Soundcloud which appears to be from a forthcoming new album. This one is rather different in that it uses more obvious vocal samples which gives is a quite a distinct feel among her other work but perhaps moves it a little closer to other artists output. It’s still Valhalla and well worth a listen at soundcloud.com/grace-valhalla/desert-heat-hey-love

Check out her catalogue on Jamendo at www.jamendo.com/en/artist/2208/grace-valhalla

I saw Grace Woodroofe in New York at CMJ 2011. Time Out New York reviewed her show at The Living Room:

“Though it was an extremely difficult CMJ decision, the ultimate lady songbird for me was Grace Woodroofe, whom I caught at the intimate Living Room. The self-taught singer-songwriter, who hails from Australia  has a bluesy voice that can easily run the gamut from soulful croon to full-on howl to heartbroken wail. At one point during her set, she seemed completely lost in her composition: all six feet of black lace swaying woozily, fingers strumming guitar strings with astute rhythm, eyes closed and barely visible through the thick curtain of hair over her face. I looked around and saw that the crowd mirrored her trancelike state—not a trace of CMJ jadedness remained in the room.”

Her set at the Aussie Barbecue was an altogether more upbeat affair in which the band even managed to blow the stage power.

A track we heard quite a while ago (2011) but I stumbled upon it the other day and thought good enough to deserve another airing.

For her fourth album, Rabbits on the Run (Razor & Tie), Carlton needed a fresh start. She had been going at full sprint since she was discovered by legendary record executive Ahmet Ertegun when she was still a teenager, signed by Jimmy Iovine soon after, and exploded onto the pop scene with the platinum-selling, Grammy-nominated Be Not Nobody in 2002. But as she was nearing thirty, Carlton felt lost.

Ultimately, she made her way to Peter Gabriel’s Real World studios in Box, England, where she created something that harks back to a different era of music-making: ten intimate, evocative songs, recorded direct to tape with a close-knit team of collaborators including producer Steve Osborne, drummer Patrick Hallahan from My Morning Jacket, and guitarist Ari Ingber of the Upwelling.

Watch the video directed by Jake Davis (Flyleaf, My Chemical Romance) for “Carousel”

EIther there’s a very old tweet showing up or history is repeating itself. Posted on Monday:

“I head back to England, to @realworldstudio on Friday,to continue work on what’s shaping up to be an album. I think i finally got the angle!”