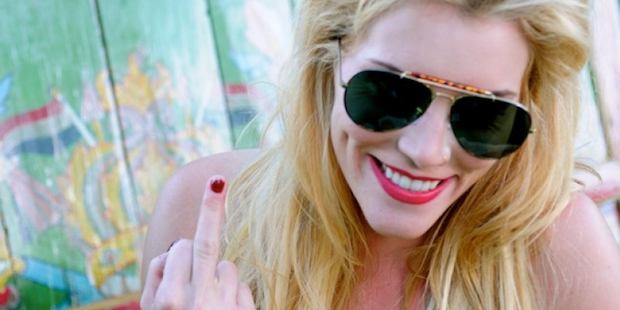 NOVI brings her spicy new single to the show this week – it’s good to have this former Adnams Artist of the Month back again.

A varied mix of tracks this week with the promised second tune from Gramatik, this time teamed up with Griz as Grizmatic. We’ve a brand new track from Dan Turnbull AKA Funke and the Two Tone Baby, some melodica magic and more, lots more.

It’s good to have former SnC Artist of the Month NOVI back on the show with The Ad, the first single from her EP Now I’m There. Release is expected sometime this year.

Thinking about it, they must be renowned by now, I remember playing The Roxy and The Whisky way back when my Island Records office base was in the oh so distinctive Capital Records Tower in Hollywood and my temporary home was the Chateau Marmont Hotel (left) on W. Sunset Boulevard where, to quote Wikipedia, “Hunter S. Thompson, Lana Del Rey, Annie Leibovitz, Dorothy Parker, Bruce Weber, F. Scott Fitzgerald, Tim Burton, Lorne Michaels, Jay McInerney, Sofia Coppola, among others, produced work from within the hotel’s walls.” Oh well, I guess “among others” is fair enough!

Their most recent album, Apply Within, was released in October 2012 and was the highlight of a national Summer/Autumn tour that included London, Yorkshire, The Midlands, Cornwall & The Edinburgh Festival.

The two members, Andy Yeoh (Drums & Vocals) and Simon Miller (Guitar & Vocals) met in school where their shared musical understanding blossomed. Following university both had accumulated a wide range of song-writing and performance experience. In 2008, Hot Fiction was formed.

The band found their centre of gravity in London, and the pair gained a cult following and now perform regularly. The release of the band’s first album Dark Room in 2008, brought an international dimension to the band’s success, attracting a new wave of fans, particularly in the US, Spain & France. In the three months following release, Dark Room was the no. 1 most popular album on the free music site Jamendo.com, where it has over 100k plays to date.

Apply Within, the band’s latest offering has been met with even greater praise, with popular music blog bluesrockreview.com placing it in the top 20 albums of 2012. Manner of Travelling the final track on the album spent several weeks as Jamendo.com’s no. 1 song.

Get the whole album from Jamendo www.jamendo.com/en/list/a114604/apply-within

Like stepper dub? Like melodica? Then you’re going to love the new EP Melodica Time from four of the best and most prolific dub artists from the netlabel community in France.

The track is based on the original mix by Phoniandflore (aka P.A.F) who has over 50 releases on Jamendo, to which Injham lends a certain refinement in this fine remix.

Injham is from “Babylonie Rouennaise”, France. He won a melodica at the Feast of Musique when he was 8 years old. The following year he played his first piece at the Feast! By the age of 10 he turned to saxophone, and as a young adult started to compose his own music and get involved in jazz and reggae bands.  By 1999 he was focusing on dub.

This is a deliciously quirky little EP which is available from the ever resourceful Angel Dust Records as a free download. You’ll find the label on Jamendo and at

The Water Village came about when a Swedish music producer and a Japanese songwriter met in Boston in 2011. Even though they had different nationalities, musical backgrounds and even tastes in food they shared the same musical taste at the core.

They just released their very first album ‘The Water Village’ on Jan 1st. The album was recorded during a year when the band traveled over North America from Cape Cod to California. The Water Village decided to invent their own musical language and create songs using everything from carefully sampled water drop rhythms to the street noises of New York City. The result is Japanese pop meeting with Swedish folk music.

‘The Water Village’ is a very fragile album created with carefully chosen colourful images to grow the legendary world of The Water Village – a place in the Atlantic Ocean located somewhere between Iceland and Greenland that was remembered by the Vikings and written about in old documents from a thousand years ago.

They created a unique mix of classical and electronic music with an acoustic piano, guitars, digital noises and vocal harmonies added on top of each other like geological layers.

The melodies are inspired by traditional Swedish folk songs and the tones of old Japanese instruments. It is a magical collaboration of experimental sounds from two different cultures.

The Woman Who Stood At The Edge Of The World – Funke and the Two Tone Baby (Kent, UK)

This is expected to be on the new Funke album Battles which is due for release in the summer. Dan sent the track over for you to have a listen to. He’s also made a free download available at noisetrade.com/funkeandthetwotonebaby

Dan is also looking for a bit of feedback so, if you’ve got something to say, contact Dan through the funke Facebook, Twitter or YouTube pages, comment in the SnC shownotes for show 356 or just drop me a line direct and I’ll pass it on to Dan.

Erk is at the controls of the good ship AMPed 369 this week ahead of his trek off from Sydney Australia to the USA.

From early on Monday morning, Ro Cutler (Dark Compass) will be presenting a bunch of great submissions from member shows in AMPed 370. Join him at musicpodcasting.org

Pretty Lights is the musical vision of the ultra-versatile producer Derek Vincent Smith.

At a time when music lovers from almost all subcultures and genres are finding common ground in the basic form of bangin’ beats, Pretty Lights is giving the people what they want: electro organic cutting-edge party rocking beats that fill venues with energy and emotion and send dance floors into frenzies.

Pretty Lights has a home at www.prettylightsmusic.com where lots of his own music is available for free download as well as other artists. It really is well worth checking out.

We heard Slovenian musician Gramatik’s track Illusion of Choice last week and I said we’d have something else from him this week. Add in Grant Kwiecinski aka GRiZ (computers/controllers/saxophone) and you have something pretty special.

Gramatik and GriZ are Grizmatik….

“Digital Liberation Is Mad Freedom” is the debut single from the new collaboration side project. The group had their live debut at the Thissongissick Secret Set at Electric Forest Festival in Rothbury, Michigan this past summer, alongside Dominic Lolli of Big Gigantic. Then they had their second show at a North Coast Festival after party at House of Blues in Chicago, which was sold-out mayhem. “Digital Liberation is Mad Freedom” or “#DLIMF” for short is their debut single taking pieces from both of their recent album, GRiZ’s – Mad Liberation, and Gramatik’s #Digital Freedom. You can download it from:

Things are getting pretty strained here at the SnC barn in terms of sleep deprivation due to the care needs of a very dear but elderly and frail relative who is living with us. I’m really hoping to be able to keep SnC as a weekly show through it all, after all, that’s the way it’s been for very close to seven years, but just to let you know that it may have to slip to a two week schedule for a short while. Don’t worry, we’re not going away and we’re planning to have more live Sessions at the Barn come the decent weather.

Thanks for your understanding.

If you’d like to get in touch, I’d be very pleased to hear from you, you can contact through the website, by email to peter [at] suffolkandcool [dot] com or by adding a comment to any of the shownotes.