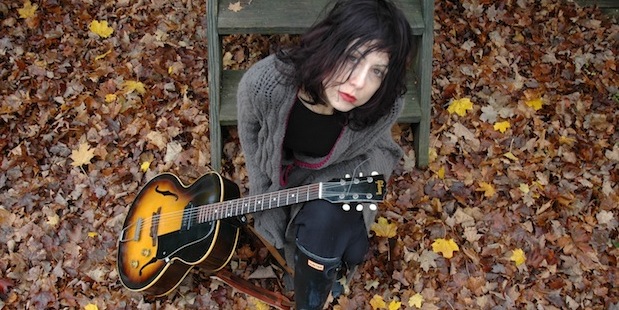 Well, it’s 121212 and it won’t happen again for another hundred years. So let’s celebrate the work of the road crews in bringing live music to us.

Too Rockabilly to be Country, too Honky Tonk to be Psychobilly, and too Punk to be Bluegrass, Angie and the Car Wrecks are hard to categorize. With blazing guitar solos, thumping upright bass, killer washboard licks, and story-telling lyrics, any music lover can find something to love about them.

What started as two brothers looking to form a Rockabilly band is now becoming a staple of the current Pacific Northwest music scene. Guitarist Dale Ball and Upright Bassist, Shawn Ball, were soon joined by Dale’s wife, Angie Ball, when they realized that neither of them could sing worth a lick. Somewhere down the line they were joined by two friends, Dustin Beck, who also plays for Wolfskull, on Drums and pro-skater (and ex-Hub City Hillbillys band member) Pigpen on Washboard. Those two brothers have now played over 100 shows in the last two years, allowing the Car Wrecks to fine-tune their unique sound into something that anybody can love (and dance to)!

Two albums, the 2010 “Bender Bound” EP, and 2011’s “Boozed and Bloody,” have been well-received, landing them some prominent gigs all over the Northwest. A new album, Half Grass, is also available for just $10 from the band’s site.

They’ve got just one show coming up on 29 December at Louie G’s Pizza in Fife, Washington along with Shivering Denizens and Hard Money Saints.

Well, goddamn it, I was driving due west across the whole wild fire conflagrated, smoke-choked, low-to-no-visibility war-mongering country to be with you. Really.

And so sorry about this voicemail but I was driving out to become a gardening guru and live happily everwhatever with you. Really.

My trunk’s still full of tools and catalogs and bee boxes. And I only stopped off I-80 looking for a slab of homemade pie because these piles of clouds had me dreaming about meringue riding high on a hefty slice of pie and Lyman, WY looked just like ‘Lemon, WY’ when the blank miles stacked up so hypnotically. And Lyman was the next exit so in retrospect all seems uh, preordained, you know?

Don’t get me wrong — you’re going to be fantastically successful giving high colonics to corrupted bodies just waiting for your special acidophilous flush and sorry I couldn’t ever let you near me with your little green practice hose but like you always said my body is my temple — so stay the hell away from — I’m digressing, sorry but, there was absolutely no way of knowing this Cowboy Inn Cafe on the sandy edge of nowhere would serve nine kinds of fresh baked pie: coconut custard, chocolate custard, rhubarb, strawberry creme, banana creme, blueberry, gooseberry, lemon and pecan. No way of knowing these pies would be baked six days a week by a rangy, big knuckled bull-rider from South Dakota named Owen Slides Off. And I had no way of knowing then that we’d soon spend every spare minute upstairs in a simulated wood-grain paneled room. Way up some crooked stairs devouring each other as these clouds that brought me to Exit 41 in the first place clamber across a herd of bleached blue skies.

Please forgive me all my appetites.

Peg emailed today to say that she also has a recent interview in RiffRaf  which embeds this lovely understated cover of Bowie’s Heroes that she played at Arlene’s Grocery (NYC) in the spring of this year.

I really see no point in artists trying to replicate the original in straight covers, because they can’t. Much better, in my opinion to transform a song and, by doing so, effectively say to the audience “Hear the quality of the song in a different way.”

Damon Guyett is a 22 year-old Canadian lo-fi/rock/noise-pop artist based in Waterdown, Ontario. After the death of his grandfather in late-2005, he and his mother decided to leave their home in Hamilton and take over the house of his late-grandfather.

“Naked House was born from a desire to find a way to express myself about why I think I am the way I am. I still haven’t answered my own questions concerning that yet, but that’s what the beauty about this project is to me. It’s the chase.”

Just a bit of a tribute to all the road crews, stage managers, tour managers, techs, sound guys, drivers, light guys and whoever else has to wipe the bums of our bands whilst they are on the road and far from home. We appreciate everything you guys do behind the scenes, never forget that.

“Many famous rockers started their rock & roll fantasies by hauling amps and stringing cables for bands including: Noel Gallagher (roadied for Inspiral Carpets), Henry Rollins (roadied for the Teen Idles), Lemmy (roadied for Jimi Hendrix!) before hooking up with experimental , Krist Novoselic (roadied for the Melvins) and even the mighty David Gilmour was a roadie for the Floyd before actually joining the band.

Some of my favourite people I’ve ever met in life have been roadies… they have amazing stories, can drink and party way harder than the bands themselves… and also work like champs after doing so. I’d rather party with a roadie than a rockstar any day… and I know I’m not alone in this.

So… if you’ve ever been in a band… or ever seen a band… you owe the roadie this one day.”

Andrew Pearson. started Third International as a way of returning to the music business (for want of a better word) after a long hiatus. Prior to this he had been professional in Europe and the US, recording and playing residencies at Max’s Kansas City in its heyday under his own name and touring with hit machines such as Henry Gross in the 70s.

“This is a solo effort. I have had in the past, the pleasure and privilege to work with some very talented musicians, as many of you reading this already know. This time I wanted to stamp a very personal signature on the music and I needed to play it all myself. It’s not ego. It is a need to personalize the idea. I wanted for these two songs a very dirty bottom end, so I used a MOOG Little Phatty to play the bass lines, and another MOOG Moogerfooger on the guitar to change the envelope of the sound. The resulting sound, playing a dissonant Americana, is what I call “Acid Swamp”. The grooves meander somewhere between a spaghetti western soundtrack and an old Tony Joe White song. The songs (as usual) are socially conscious, motivated by a real desire to wake people up to the big issues we face today. This is it. The August Single. Andrew Pearson/August 2012”

Landfill Harmonic is an upcoming feature-length documentary about a remarkable musical orchestra in Paraguay, where young musicians play instruments made from trash. For more information about the film, please visit facebook.com/landfillharmonicmovie

David Reo is a singer/songwriter/guitarist and music producer who has assembled quite a catalog of songs and albums.

He has been playing and recording for many years and has expanded his reach into other areas of the entertainment industry as well. In November 2012, David released his latest CD “Life is Good” with his hit single “Shell Shocked” leading the way. This song is about a girl named Michelle, thus the title ‘Shell’ Shocked.

Tide Eye is the new project by 22 years old Noel Gutierrez (already featured on Bad Panda a couple years ago under the moniker Hi Tiger). He is back with some spacey, dark, magical sounds.

The American South is full of weirdness, mystery and beauty — and the tiny Louisiana city of Winnfield is no exception.

Long known for wide streets, a salt works that was attacked by the Union Army and native son Huey “the Kingfish” Long, Winnfield is now the birthplace of a new and profoundly gorgeous and twisted style of blues that echoes between the music’s deep roots and shimmering future. Its makers, the group Blu Acid, call it “toxic guitar noir.”

Like moonshine, it was slow brewed in seclusion — in a tiny house on Lenox Avenue during all-night-and-day marathons attended only by the two members of the group and the ghosts of the past, who were eager to have their voices echo into the modern world.

Blu Acid started simmering in 2010 when a college-drop-out DJ and computer geek and an old bluesman met while both of them were staying at the Fairhaven Homeless Center in Monroe, Louisiana. They started to jam, write and arrange music, letting their own instincts — and the spirits — lead them.

Deep in the Center’s basement they found an old four-track tape recorder and in early 2011 they started to record their sessions. They send out a few demos and caught the attention of a local label, Deaf Dog Records in Shreveport, Louisiana, which pricked up its ears at the moaning, crying, shuffling, throbbing, soaring sound of their funky recordings.

With the advance for their first album they were able to rent the little house on Lenox Avenue, and Blu Acid decided to name the first CD Lenox Avenue after the street where their conjuring took place.

Just recently Blu Acid started doing live gigs in Louisiana and the neighboring states. But their eyes — and their Ouija board — are also focused on Europe.