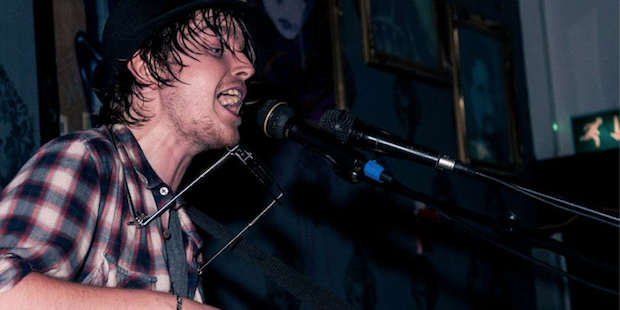 We’ve got a rather acoustic, unplugged kind of feel to a lot of the tracks this week. There’s a great mix of raw, passionate songs with some superbly executed musicianship from London, New York, LA, New South Wales, Manchester, Margate and Gardabær, Iceland.

“Dikta has been a creative outlet since high school, friends since kindergarten, music is a shared passion for all of us so it just made sense to do it together,” according to Haukur. Started in a garage in their hometown of Gardabær, Iceland, Dikta was inspired by bands like The Smashing Pumpkins and The Cure.
Dikta, an Icelandic verb meaning “to compose or make something up,” remains immersed in the same passionate and soulful atmosphere it was formed in, inspiring their melodic alternative mainstream sound. Their album, Hunting for Happiness, released in 2005, expanded their European audience. Dikta filled every venue and played every festival in Iceland. Their powerful performance in front of a packed venue at Iceland Airwaves earned them a mention in Rolling Stone Magazine. Dikta opened up for The Kooks and Hurts during their 2011 European tour before releasing their third album, Get it Together, through their recent union with German record label Smarten-Up/Rough Trade.

Playing together for as long as they have, the members of Dikta are able to “feel each other out” while creating new music, explains Haukur: “We’re communicating with each other through our instruments and our music.” Their music-making process allows them to try new instruments and recording techniques, a freedom that carries over to their powerful live performances.

Now releasing a brand new captivating music video for their first single “What are you waiting for?” from the album Trust Me, recently released in Europe 24th of August and 4th September in the US. Dikta performed at CMJ Music Marathon in NYC, Iceland Airwaves in Reykjavík and will be touring Germany later this month.

Robin Grey has been impressing us with his thoughtful quietly spoken music for a while, now he has come up with a music video featuring the talents of legendary puppeteer Ronnie Le Drew on marionette (http://www.ronnieledrew.com/) and young blood Arran Glass on plants.

As I suppose we should expect the video is as thoughtfully and creatively produced as the music. A real treat.

The track is from his album The Nearest Door.

Known for her compelling live performances, Rebecca will be hitting the road this summer and fall on a unique tour in partnership with the first-of-its-kind all-women wine company, Women Of The Vine, kicking off in Paso Robles, CA on May 26th. Over the years, she has shared the stage with numerous artists, including Aimee Mann, Peter Himmelman, Madeleine Peyroux, and Luciana Souza.

A couple of dates supporting Marc Cohn this week:

that tour continues into the new year.

Enjuillet was originally formed by Ela Kitapci and Taylor Morrow as a side project when the two musicians began writing together while fronting their own respective bands. Shortly after, the two bands dissolved and Enjuillet became the sole musical outlet for the two young musicians.

Enjuillet’s first project was the “Kingdom by the Sea EP” which was released in the summer of 2011. The six track EP was recorded at Loyola Marymount University as a thesis project for friend of the band Danny Parra, a recording arts major at the university. The goal then, as it is now, was to create moving, meaningful and entertaining music that would astound and delight audiences of many different musical backgrounds. This EP captures the essence of these two individuals and Enjuillet as a whole.

“Kingdom by the Sea” is inspired from a line written by poet and short story writer Edgar Allen Poe in his poem Annabel Lee. The song follows a suggested dialogue between Poe and Annabel Lee; what they might have said to each other during the final moments of her life. This song has a most glorious melody to it with the two characters playing thought for words, joining the force of love through melodic wonder. It is unique in every sense of the word.

These songs, beautifully arranged and choreographed, allow audiences to envelop themselves in the storylines that are so eloquently presented.

Enjuillet has performed in and around the Los Angeles area including but not limited to The Whisky, Roxy and Viper Room along with many smaller venues. Enjuillet are an amazing duo. These creative minds fused with exceptional talent bring sonic beauty in its most unique form.

Footprints On The Moon – Will Knox (NYC)

London born Will Knox embodies all that is great about the troubadour tradition in England and translates it to New York where he plays with a talented group of UK and US musicians. Together they create something that is at once rootsy and yet intelligent and demanding of full attention. Indeed that is what he achieves every time I’ve seen him play, almost immediate silence and an enraptured audience.

The track is from his 2010 album The Matador and the Acrobat.

Will is playing a show in London next Wednesday 21 November at The Slaughtered Lamb, 35 Great Sutton St., London, EC1V ODX

Grab this opportunity to see the maestro at work.

Blinded By Love – Jack Ladder and The Dreamlanders (NSW, Australia)

Another track off the remarkably solid debut Hurtsville album from Jack Ladder and the Dreamlanders. Eight varied tracks that give you time to really get into them. Sung with a passion against a sometimes industrial backing that is somehow both sparse and lush.

As I think I said before I rather suspect that we’ll be coming back to this album for a while.

It is a huge regret that I didn’t get to see Jack Ladder perform at the Aussie Barbecue at CMJ2012. 🙁 Or any of the other three NYC shows they played that week.

Franco’s singing and playing exude confidence and while making no attempt at covering up his Mancunian inflections, his delivery is all the more real and raw.

Franco is no stranger to success and as a testament to the power of his musical ability, he was asked personally by Desmond Tutu to write a song celebrating the life of Nelson Mandela. The archbishop gave the song entitled “Inyaniso” (translation – “Truth”) as a gift to Mr Mandela for his 90th birthday.

Previously Franco was the songwriter and front man for International One, who signed a record deal with a subsidiary of UNIVERSAL RECORDS. Shortly after the label went under in the recession causing Franco to partner up with his acoustic guitar and embark on a solo career.

Franco and the Dreadnought have released a 6 track EP of well recorded demos.

If you’re in London, he’s playing The Bedford in Balham on Thursday (tomorrow) and on Friday, he’s playing Sanctuary in Cow Lane, Burnley.

Funke and the Two Tone Baby (Dan Turnbull) is off on his first UK tour in a week or so.

After slots at some of the country’s leading folk and blues festivals, including Smugglers Festival, Leigh Folk Festival and Broadstairs Folk Week, the one-man mechanical blues band is now taking his show further afield.

With a stage presence and his mix of the traditional combined with a love of electronic music he brings the blues into the 21st century.

Beginning on November 25 in his home county of Kent, Funke will play eleven venues from Coventry, Gloucester, Oxford and London:

November 25 – The Duke of Cumberland, Whitstable

The ‘Injustice & Queen’ EP is out now, available from shows, or digitally at iTunes and Bandcamp

Debut album scheduled for release in summer 2013 with larger UK tour to support.