SnC 348 – All corners of the everywhere 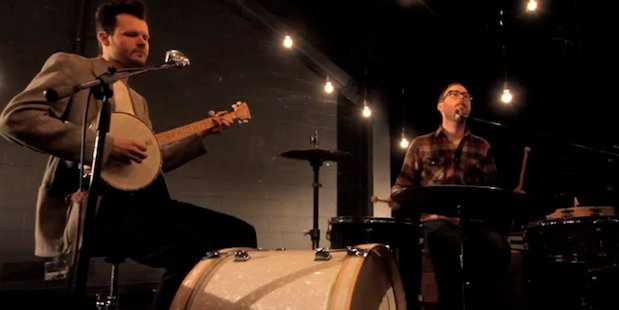 Music from all corners of the everywhere this week with a diversity of tracks from locations as remote as Oregon, Sweden, The Yukon as well as the hotbeds of contemporary music making in Ontario, Brooklyn, Japan and southern France.

It never ceases to amaze me how much spectacularly individualistic music is being created today and how feasible it is to buy it from anywhere in the world. Not many years ago, the only viable way of finding music by talented artists like Volfonique (pic) would have been to travel to his home area and seek out local record stores. What a difference technical developments have made.

Speaking of which, the new Suffolk’n’Cool website is making what can only be called progress. The current sticking point is to develop a good audio player to replace the current Flash player that will work reliably on IOS devices (iPad, iPhione, etc.) as well as most browsers on Mac and Windows. For the technical, HTML5 seems to be the way to go, so that’s where we are going.

A track from his album Ernest which you can pick up through the wonderful LCL netlabel at www.lclweb.org/artists_volfoniq.htm

Founded in 2004, Volfoniq is a “one-man-dub” from the south of France. In a retro-futuristic mood, he uses his classical formation (clarinet) and a rich musical history to produce a dub that goes farther than tags, respecting the jamaican roots, but adventuring into new lands of experimentation. Based both on electronic and acoustic elements, his music is fundamentally opened and generous.

Recognized for his producer and remixer skills, Volfoniq stepped over the stages in France and Europe thru rare and osmotic livesets. Encounters and sharing are at the center of Volfoniq’s approach, that led him to collaborate with numerous artists from different kinds and places.. On this pilgrimage, he’s faithful to LibreCommeLair (LCL) label, and also made some releases on prestigious e-labels like Jahtari or A Quiet Bump.

Alan Carr at Darkhorse Radio recommended that a few of us take a listen to Ali’s music – thank you Alan. Quite a find. Ali says,

“I love music. I’m so glad that i have had the opportunity to make it with good friends and its my sincere hope that if you stumble upon my music that you find something in it for yourself to enjoy or connect to.

I have no demands of music except that it continue to exist in my life which it does …and for this I feel excessively fortunate.

Les Cooper has been an integral contributor to the songs. We made these songs together in the greatest spirit of music during afternoons where we killed a few hours in the company of one another, laughing, discussing life and strumming a few chords with generosity of spirit and mind. Les is an incredibly gifted, creator and you should search him out. He infuses all his projects with something incredibly special which I’ve been thrilled to hear and share with him all these years.”

Beginning with a much buzzed-about remix of Lykke Li’s “Love Out Of Lust,” followed by a two song EP, Saturday, Monday’s latest concoction is “Headshake.” Featuring the sultry vocals of Julia Spada, “Headshake” is a deceptively sly dance track, minimal but instantly addictive. The “Headshake” Meltage remix is a trippy, dreamy affair, delving deeper into the Parment-described “darker” territory that he first introduced with the Lykke Li bootleg remix. In the accompanying video, a motley clutch of skaters, smokers and vagabonds spark to life and escape ennui, with “Headshake” providing the perfect soundtrack.

Saturday, Monday’s upcoming full-length album The Road and the Ocean and the End is set to be released in early 2013 via Despotz Records.

American singer-songwriter Lukeus Adams was born in Utah, but is now settled in Portland, Oregon where he’s been releasing his music since 2002, slowly but surely finding a substantial local following.

His songwriting style and presentation might best be described as alternative folk, as it’s very much song-centred, with just an acoustic or electric guitar providing primary backing. The musicianship is bright and clear, but it’s Lukeus’ voice that chiefly catches the ear. Its cracked, weathered tone seems to reflect a 100 years of hard living, and it drips a sad and soulful intent.

The new album from Old Time Machine (Ryan McNally, Kyle Cashen) was released a couple of weeks ago via File Under: Music.  The 9-track album comes on the heels of the bands’ critically-acclaimed debut EP, Old Time Machine/Old Cabin.  Produced and engineered by Jordy Walker, the full-length has already received incredible reviews throughout Canada.

Forming in 2009, Ryan McNally and Kyle Cashen came together for an art exhibition.  In a fort made of cardboard boxes, scrap lumber, thrift store sheets and chicken wire, the duo started as the art-show contribution of a bluesman and a bedroom-musician who were tasked to create works representing the long, dark Yukon winter nights.  The duo work together to blend Ryan’s studies of finger style traditional blues, with Kyle’s experience crafting ethereal soundscapes to create familiar, but distinctly original music.  Music that Uptown Magazine claims, “many will soon be familiar with.”  Released in Canada this past April, the two have been touring relentlessly in support of their debut from which Pouring Rain is taken.

Armed with horns, guitars, and everything in between, the six men of Great Caesar produce a brilliant and unmistakable brand of brass-fuelled rock. Their sound is at once organic and electrifying, combining jazz roots with hard rock sensibilities in a way that does justice to both.

Great Caesar began modestly as a jazz trio before gathering three more members, swapping instruments, and evolving steadily into the six-piece powerhouse they are today. Their studio offerings include a self-titled EP (2007) and a string of A-side singles (2010), which they continue to give away for free despite their growing popularity. First and foremost, however, Great Caesar is a live band, dazzling audiences with performances that are equal parts chaos and virtuosity. Fans have noticed, flocking in ever-growing numbers to shows across New England.

Don’t Call Me In The Morning – Otonana Trio (Japan)

Otonana Trio is a three-piece rock band formed by guitarist Kentaro Saito (formerly of Dynamite Club), Naoya Miyara (who performs with The Cavemans), and Goshi Miura, who is described as one of the most active and hardest working bassists in the local Japanese music scene. The name Otonana Trio roughly translates to “Three Grown-ups” or “Trio de Adults” in broken Japanese.

Kentaro Saito, 38, made a name for himself during his fifteen-year career as guitarist for NYC-based rock group Dynamite Club.

Dynamite Club performed at venues all over the world, playing shows at local clubs, in living rooms, and at big festivals, while spending most of their nights sleeping on the floors of lovely accepting people’s homes, who had become their friends after only a couple of hours.

For Otonana Trio’s debut album Stories at the Homerun Office, Saito gathered some of the best musicians in Japan to put together a work with a fresh new energy that displays his musical evolution.