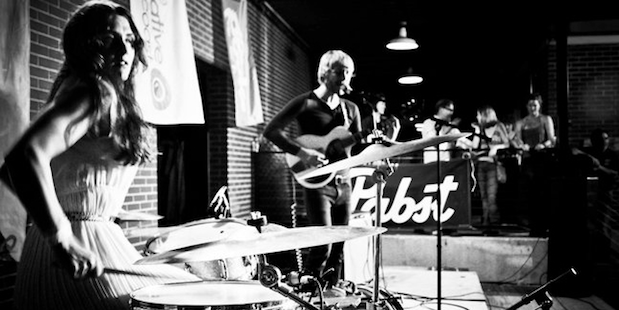 Crushed Out: Something of a two person powerhouse with a talent for the quieter stuff too.

No it really is 345 this week. I just got it completely wrong all through last week’s show (#344). Doh. Must try harder.

It’s CMJ week in New York and I’m stuck here in the UK. Still, cancelling New York relatively late in the day means that the diary is relatively clear so there’s been time for a few days in Cornwall. Now it’s back to the Barn and get cracking with that website.

Weigh You Down – Crushed Out (Brooklyn, NY, USA)

Crushed Out is an explosive hit of surf-garage momentum and rock & roll from Brooklyn, NY consisting of Frank Hoier on guitar and vocals and Moselle Spiller on drums. After four national tours and a well-received EP, 2010’s Show Pony, the couple, formerly known as Boom Chick, are set to release their debut full-length, Want to Give, on Nov. 6, 2012 on their own Cool Clear Water imprint. Want to Give is a pure guitar/drum adrenalinrush – plenty of fuzz, tremolo, riffs, chunky chords, slide and Black Sabbath power chords. The songs are tight and lean; no fat, no studio fairy dust. Recorded both at Brooklyn’s Bunker Studio as well as at Crushed Out’s own analog studio in a rural New Hampshire barn, the tracks were all self-produced and mixed by John Davis.

The bulk of Want To Give was created during Charles Shaw-fueled jam sessions at the duo’s practice space in Red Hook, Brooklyn in 2011. Moselle was working as a freelance graphic artist and Frank taught guitar lessons. At night, they’d jam in their industrial space in Red Hook’s Ohm Acoustics speaker factory. Deciding to escape NYC rents, they moved their gear up to Moselle’s childhood town in rural Effingham, NH, where they set up their own 16-track recording studio in the old barn on the property.

Crushed Out formed as Boom Chick in September 2009. Southern California native Frank came out of the skate punk scene and learned his way around a recording studio (as well as his wariness of record labels) from his father, a musician who was in the first white band signed to Motown Records. Moselle grew up in New Hampshire and is a former junior Olympic downhill skier who later studied graphic design. She produces all of Crushed Out’s distinctive artwork, videos, posters and merchandise and makes a lot of her own stage clothes. Moselle’s ability to learn to drum – she decided to play the drums and three months later the two were playing Brooklyn loft gigs – was a highly discussed topic in early interviews. Now an accomplished drummer with four national tours under her belt, she is the thunderous beat in the band, with Frank taking on lead vocals, even while shredding on lead guitar.

Singer/Songwriter Sam Fitzpatrick fronts a collective of musicians and friends performing sincere and intricate acoustic/alternative folksong. With their wistfully folky sound, these boys bring a special sort of energy to their music, gracefully waltzing between the “get up and dance” and the “sit down and listen”. Fitz. is on tour throughout the UK in support of his forthcoming single ‘Caves’ released on Monday (October 15th).

The band introduced a sound that has been described as West Coast pop on steroids with a trilogy of summer singles over 2011/2012 and gained national attention for their innovative use of QR codes as a music distribution tool for the forthcoming album. Having already supported the likes of Mumford & Sons and The Stranglers, and performed at BBC Radio 1’s Big Weekend Festival the band continue to support releases with live shows and festival appearances in London and the South East with plans afoot for a UK tour later this year.

With recently single ‘BAD KARMA’ getting picked up for the soundtrack to the £2m British feature film Lucid coming out next year things are really heating up for this Kent based four piece.

Another deliciously quirky track from NYC artist Peg Simone. Her idiosyncratic take on music and life really appeals to me. So does her sometimes snarling sneering vocal tone.

I reality she is a lovely person with whom I had the great pleasure of lunching last year.

Melbournian five-piece Skipping Girl Vinegarwas established in 2006. The band comprises of brother/sister duo Mark and Sare Lang and their respective childhood friends Chris Helm, Amanthi Lynch & Kelly Lane. Their debut album launched in 2008 – “Sift the Noise” brought the band to the attention of the music industry and earned them critical acclaim from senior music writers across the nation.

Childhood friends and celebrated songwriters, they have released two critically acclaimed albums in their homeland, Sift the Noise and Keep Calm, Carry the Monkey that made many ‘Album of the year’ lists.

Where hi-fi swagger meets low-fi sway, Skipping Girl Vinegar have carved out their own heart-warming, hobo-pop sound that is testament to the band’s old-world authenticity and song craft. Skipping Girl Vinegar released their Chase the Sun EP into the USA on the 25th of June that hints at whats to come from their critically acclaimed album Keep Calm Carry the Monkey due for release into the USA later this year.

Skipping Girl Vinegar has played many of Australia’s premier festivals including packed shows at Splendour In The Grass, The Falls Festival, Woodford Folk Festival, Sunset Sounds, Pyramid Rock and Port Fairy Folk Festival. SGV have also supported the likes of The Lemonheads, Something for Kate, Shout Out Louds, Missy Higgins, Angus & Julia Stone.

Recently charting on the U.S. CMJ charts with their ‘Chase The Sun‘ EP (2012), the band have been invited to play the CMJ Music Festival in New York which is on this week. They are playing no less than three CMJ slots:

The Delancy on Saturday at 5:20 as part of the legendary Aussie BBQ which is organised by Millie and the Sounds Australia team.

They also have showcases in Los Angeles & Nashville. Whilst in the U.S. Skipping Girl Vinegar begin recording their third album with legendary producer Brad Jones (Josh Rouse, Missy Higgins) and release their Keep Calm, Carry the Monkey LP into the U.S on Mon, 22nd October 2012.

Montana outfit D A W N S is a musical collaboration between songwriter David Boone and string-arranger Audrey Riley which released its self-titled debut in June. Now, the group, which worked with producer Danton Supple on their previous release, will unveil a new 7-inch on October 9. So Help Me God is the centerpiece.

Today, RCRDLBL premieres a FREE DOWNLOAD of “So Help Me God” with Emily Zemler calling the track, “A rocklicking folk-rock number with orchestral undertones.” The first new music from D A W N S since the EP and again produced by Supple, “So Help Me God” will be available as a 7-inch with b-side “Camouflage” on Tuesday, October 9th.

The touring band is an eclectic six-piece outfit with upright bass, cello, lap steel, bow saw and percussion and they’ll be on the road through the Fall with stops in San Francisco, LA, Austin, Milwaukee, Philadelpia and NYC for multiple CMJ performances.

From Penzance in the far west of Cornwall, BAGAS DEGOL has/had a fast growing reputation on the Cornish music and dance scene with their distinctive style of traditional music delivered with a powerful, raw edge. Their name in Cornish means ‘Feast Day Band’ in recognition of the occasion for which they originally came together – to accompany the famous Tom Bawcock’s Eve lantern procession in Mousehole.

I first played a track (Bodmin Dubbing) from their album Tonight we’re going to party like it’s 1399 on SnC 039 back in November 2006. One concern is that in August 2010, the previous time they were on the show) their website was advertising gigs from 2007. Now it is gone entirely. Very sad 🙁

However, they did show up here: www.cornwallmusic.co.uk/events/bagas-degol-red-letter-days-0 so perhaps there is hope.