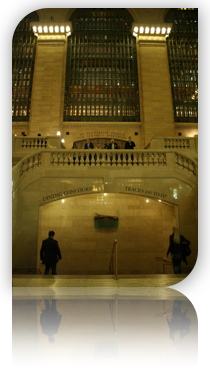 Canada, Italy, Australia, New York and The Netherlands are represented in our global roundup of all what’s new along with a spicy bit of what’s not quite so new but really earns its keep.

Of course yesterday was the anniversary of the 9/11 attacks on New York. So this week, another picture from a fabulously atmospheric night in New York – this time without the mist because this is inside Grand Central. When I get the new website up I’ll put a few of these pics up in a gallery for you.

The Balconies are packing their bags again, this time with their sights set on the west coast. The dynamic trio are representing Canada at FILTER Magazine’s 2012 Culture Collide Festival this October 4-7 in Los Angeles, California. Of course, one road trip is never enough, and the group will be playing their way across the country, joining blues-rockers Big Sugar as well as Wide Mouth Mason on Canadian dates including long overdue stops in Vancouver, Calgary and more.

It seems as if 2012 has been non-stop for The Balconies who released their Kill Count EP (Coalition/Warner) in February along with a music video for the title track. What followed was a flurry of touring including festival stops at the likes of South by Southwest in Austin, TX, Summerfest in Milwaukee and recently back-to-back dates at Edgefest and Ottawa Bluesfest. Their touring hasn’t stopped there with recent dates in New York City alongside U.S.S., the pleasure of opening for Sam Roberts Band at Jackson-Triggs Winery, and most recently Ontario dates with Los Angeles-based group The Aggrolites.

The raw energy and charisma that comes from frontwoman Jacquie Neville backed by Liam Jaeger on drums and brother Steve Neville on bass has left audiences in awe nationwide.

Described as the Picasso of the Australian independent music industry, Strangejuice use a wide range of contemporary and world instruments (from conventional Guitars, Piano, Sitar, Banjo, Tanbura, Bodran, all the way to the quirky, Shuffling Cards, Footsteps, screeching birds), to find joy in recording, busking and playing live, and understand the importance of deep lyrical content.

Harmonious vocals and brooding, prophetic lyrics are what we have come to expect from Strangejuice, after the double LP “Brown Songs” (a collection of early works) was released internationally in 2008, and this album, It Was Mum’s Idea, certainly does not disappoint. After four years in the making, songwriter Mike Anderson (West Australian Song of the Year 1998 Nominee) considers this collection his best work so far.

Although a conventional songwriter, Mike Anderson’s 5 years of experience in composing music for film and television impregnates the album with a deep and atmospheric quality, and his desire for real instruments and aversion from synthesizers makes for an original, earthy experience.

Voodoo Tapes: pseudonym of Giovanni Roma (aka Blob). It began in 2011 for an irresistible impulse to perform digital dub vibrations. There is no other reason why this project was born over the trance of bass, hi-hat and spring reverb.

Samedi Night Fever is another fine album from the Italian net label A Quiet Bump. What started out as a collective with a few musicians and their side projects has now become AQUIETBUMP the label. They really specialise on dub and downbeat styles and encourage research into deep, lowend frequencies and slow flow rhythms.

Comprised of members from A Shoreline Dream (USA), Cacheflowe (USA) and Jap Jap (Netherlands), Brim Liski began as an asynchronous and eclectic trans-continental studio project. Recording in each others’ studios over the past 5 years, the 3 producers have collaborated in multiple capacities, with the result sitting plainly between their unique styles as an audio Venn diagram. The end of 2011 saw the group take their sound to the stage, with 2 guitars, vocals, synthesizers, laptop beats and custom audio-reactive visuals.

At times both uplifting and melancholy, the new Brim Liski sound describes vast intergalactic travel, distant astronomical events, and the universal connection to the human spirit. The remixes by Sean Byrd and CacheFlowe expand on the Brim Liski sound, delving deeper into a technological future with experimental, offbeat, minimal and future bass renditions.

It’s not often that I play the same song by the same artist in consecutive shows but this week is an exception. I love the work of Marla Mase who kindly sent me a bunch of tracks across from New York, among them this decidely dub version of the AnnaRexia track that we heard last week – an interesting twist on the original.

Marla is off to China next week she has been invited by the United Nations to perform at Global Peace Day. I’m expecting to hear all about it 😉

Fall 2012 sees the release of The Poet’s Dead, the third and most accomplished album to date by Regina, SK sextet Rah Rah.

Lyrically, The Poet’s Dead showcases some of their finest, most direct songwriting yet and is their strongest collective step forward. From the self-reflections of “20s”, “Prairie Girl” and the album’s title track to the wistful hope of “First Kiss” and the twisted anything-for-love paean “I’m A Killer”, the songs discuss maturity, growing up and life in a rock and roll band from a group that have spent much of the past few years doing exactly that. These are songs handcrafted to make you think, to create dreams and to break your heart.

Rah Rah formed as a trio in 2007, originally created by Erin Passmore (vocals, drums, keys, guitar) and Marshall Burns (vocals, guitar). By 2008 they had been joined by Kristina Hedlund (violin, keys, accordion, vocals) and Erin’s brother Joel Passmore (formerly of Despistado and Sylvie) on bass. Later that year another former Despistado member Leif Thorseth (guitar) also joined the band. The band is rounded out by its newest member, Jeff Romanyk (drums, keys, guitar).

Like many bands before them, School of Seven Bells were born as the result of a late-night revelation. Benjamin Curtis connected with sisters Alejandra and Claudia Deheza in 2004 while their bands—Secret Machines and On-Air Library!, respectively—were on tour. While watching PBS at 3am, Alejandra caught a show about the School of Seven Bells: a mythical South American pickpocket academy that may or may not have existed in the ‘80s. The idea of seven minds working as one appealed to her, as did the phrase’s cryptic musicality, and a creative spark ignited.

By the end of 2006, Curtis and the Deheza sisters had completely disappeared into School of Seven Bells. From the outset, it was clear that the trio’s music transcended the usual genre restrictions.

On their Ghostly debut, Alpinisms, we get the impression that the three seasoned musicians have taken up full-time residence in a dizzying fantasy world; they move freely within the realm of pickpockets and dreamers, composing a soundtrack according to their own odd, beautiful logic.

Their most recent album Ghostery is available on iTunes and Amazon stores. Check their website for links and some fine videos for the song The Night, produced by independent filmmakers.

Gabor Kovacs introduced me to School of Seven Bells when I was listening to the currently somewhat dormant Electrical Language podcast way back. I am still very grateful.