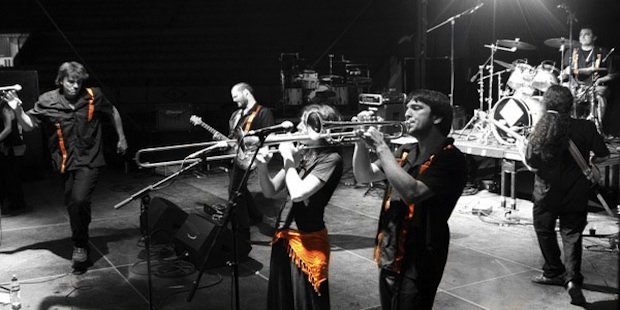 Sundayers: Reggae, funk, ska and more. At last, a glorious fusion that works from this Madrid band.

We get into a couple of areas which I’m reluctant to describe as electronic-ish music because I know that may well put some folks off listening.

As ever, I just ask you to come along with you usual open mind and enjoy the music for what it is, not which genre is might fit.

The selection of tunes from Spain, California, New York, New Jersey, Italy, Canada and Georgia are by no means all electronic, or even electric, so sit back and revel in some wonderful music making.

It was good to get away from the Mac and the barn for some very welcome late summer sun and fresh air at Orford. A fascinating place and the site of some important research and testing by the British military in both world wars. The pagoda buildings in this week’s pic, if you can make them out, were build to accommodate tests of nuclear bomb trigger mechanisms – the idea being that if the bang was a lot bigger than expected, the roof would drop onto the scene and secure it. Hmm. There was never any nuclear material on site so I wonder why such precautions were necessary.

Also out on Orford Ness is the now redundant lighthouse which is expected to be consumed by the sea before long.

What a lovely band they are.

At the end of 2009 they began the recording of their second album “Cógelo”. This time with Ferni Duhalde as sound engineer (El Tio Calambres, Eureka, Outro Jazz), and a very creative music production – with thirteen tracks full of energy and a crucial fusion of styles and the consistence and strength of the songs. In March 2010 they published the album for free download on Jamendo.

Sundayers is a band from Madrid, Spain. They have been supporting Creative Commons and free music for seven years, which has helped them promote and share their energetic fusion of ska, rock, reggae and funk.

They have a message for their Jamendo listeners:

“We’ve always believed in collective composition of our songs, in the benefits of sharing, and the understanding of the culture as a right, not a privilege.

Our project has grown up thanks to you, who have been listening to us, supporting us and coming to our shows. Now we need you to participate as co-producers in our next album in order for it to come true.”

Go HERE to help with the making of their 3rd album and do most certainly take a look at the videos.

This Spanish collective plays an energetic music, a mix between reggae, ska, funk and all the styles each member will bring out. Always ready to party, you could see them everywhere in Spain and maybe in Europe in the next months.

California based singer/songwriter Valente’s EP Alexandria, out yesterday, is a collection of 5 songs using his trademark cinematic, soothing sounds and serves as an appetizer to an upcoming full album to come later this year. The EP available for streaming in MSN’s listening booth was recorded for a large part at Aaron Embry’s studio (Edward Sharpe & The Magnetic Zeroes, Daniel Lanois & Elliot Smith).

Born Valente Bertelli in Rome, and raised in the Italian part of Switzerland, the singer grew up in a creative family. Having a Mother who was a Jazz Singer and a Father who was a Theatre Director, Valente was genetically destined for a future in music. Drawing influences from Brian Eno, Sting (both during and after The Police) & Peter Gabriel amongst others, Valente has shared the stage with Nouvelle Vague, and Skye of Morcheeba at Royal Albert Hall in London.

Marla Mase is a writer/performer/producer/singer/songwriter from New York City. She writes songs, plays, monologues, short stories, erotica, blogs,and poems. She is known for her gutsy, sexy, raw, performance style and her intelligent lyrics.

Marla’s co-writer and producer is internationally renowned guitarist/ recording artist Tomás Doncker. They are now working on her 3rd CD,personal affairs, scheduled for release in the Fall 2012.

Anitek is a Trip Hop Producer from New Jersey. He has been playing piano for 15 years, along with cello, clarinet, guitar, bass, drums and is also a scratch DJ. His main influences are Rachmaninoff, DJ Krush, Bonobo, and Fat Jon. He often incorporates genres such as Chillout, blues, jazz, funk, Electronica, Lounge, Soundtrack, Ambient, and old-school Hip hop into his music, creating a lush, melodic Soundtrack for either Lyricists, Commercials or film.

The track is from his very newly released album Calm & Collect Vol.3which came out through Jamendo at the weekend.

Jambassa is a digital dub project, started in 2000 by Carmine Minichiello (Gamino) & Raffaele Gargiulo (Papa Lele), and settled in Irpinia -South of Italy-, a rugged and poor land, far away from the nerve-centers, where digital dub music had way and space to express itself: a physical and cultural isolation, which develops in Jambassa an own original style, detached form the genre standards.

Another fine album from the Italian net label A Quiet Bump. What started out as a collective with a few musicians and their side projects has now become AQUIETBUMP the label. They really specialise on dub and downbeat styles and encourage research into deep, low-end frequencies and slow flow rhythms.

Matt Andersen has a larger than life showmanship that has been earning him a fervent and steadfast audience wherever he graces the stage. Matt’s sprawling blues, roots and rock musical hybrid with his sorrowing and soulful voice and astonishing guitar-playing has sparked a phenomenal buzz on Canada’s East Coast.

Also check out Matt’s performance and conversation in a Session at the Barn which you’ll find at SnC show 278.

Favourite Day – Abby Wren & What It Is (Atlanta, GA, USA)

In 2009, Scotty Bryan and Abby Wren formed a nameless project jamming and recording songs in the basement of a house on Greenleaf Rd in the East Atlanta Village. Abby Wren & What It Is slowly enlisted additional musicians around Atlanta through the use of word of mouth, demo CDs, Craigslist, and a little bit of good mojo. Having worked with Scotty before, Darren Michaels joined up with the duo and was soon followed by Atlanta newcomer, Dane Skelton. The most recent member, Jason Beard, hitched up with the band mere weeks before tracking of their very first album.

What has grown organically from those late night sessions in the basement has now become a fully functional, foot tappin’, head-bobbin’, Soul/Rock driven Funk machine!