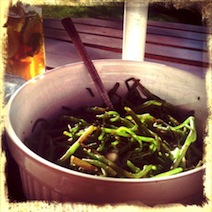 Great new independent music this week comes from MA, TX in the US, a couple of tracks from Toronto and Regina in Canada, a couple from London, plus one each from opposite ends of the world Brooklyn and Tasmania.

The weather finally turned hot in the past few days here in the east of England. The best thing about that is that my friend Paul took his boat down the estuary yesterday and returned with a veritable feast of Samphire (see picture) – a marsh plant which is in much demand in London restaurants where it fetches silly prices but which I’ve enjoyed since a child. In my home town it was, until a couple of years ago sold street to street from a horse and cart.

No it really was only a couple of years ago. Sadly, the old boy died but his horse is still with us!

Panic Dance is a London based hip-hop, ska-punk, reggae, dubstep and anything else inbetween machine. We mash up the best parts of all the coolest genres and serve it up in an easy to listen hard hitting style. There is no other like Panic Dance.

Panic Dance was conceived in June 2009, it started out as a one man project but quickly gained popularity and evolved into the band effort that it is now. The fact that it spans seamlessly spans genres means PD has had the privilege of playing in front of many different types of crowds

Panic Dance is that “way”, it’s never gonna be finished. It’s always evolving, and it’s always surprising. Take your shoes off, let your hair down and enjoy the ride! It’s gonna get messy and at times it might even hurt your knees, but it will ride you and guide you to places you’ve never even dreamed of.

The band consists of the four current members:

Microtron – Microtron is a laptop and provides the band with all the loops, bloops, bleeps and beats.

I came across this fabulous track on IndieShuffle.

Gem Club is the musical project of Christopher Barnes with cellist Kristen Drymala and vocalist Ieva Berberian. They first released an EP “Acid and Everything” July 2010 followed up by their debut album “Breakers” on Sub Pop offshoot Hardly Art late September 2011.

A “gem” of a video from the good folks at Dig for Fire + Audyssey who shot this live performance of Gem Club playing Twins in the Lower East Side, NY check out http://theneighborhood.tv

The Neighborhood Session, Lower East Side with Gem Club “Twins” fromDig For Fire on Vimeo.

White Widow’s work has always focused on the emotional power ripe in life’s contradictions. Her first album, 2005’s NO WOOD TO KNOCK ON, counters love’s uncertainty with its attending beauty.

Carla Patullo contributeds Guitar, Vocals, Keys, Bass, Production and is White Widow. She began performing in the New York City rock scene, taking off from the legendary club CBGB in 2004 and then touring nationally and internationally (Arezzo Wave Festival Tour in Italy). At SXSW 2010, she opened for Sandra Bernhard, and continued as her musical director and on-stage backup for Bernhard on tour 2010-2011, sharing the stage with great performers such as Liza Minnelli, Justin Vivian Bond, Rufus Wainwright, and Leisha Hailey. She also appears on Sandra’s latest album, I Love Being Me, Don’t You. In fact, Sandra Bernhard said of White Widow “so fucking raw and groovy that it scares the shit out of me”.

From Robin’s 2009 album Strangers with Shoes on Modifythevan

It’s a song of a pretty simple structure. You might even say it is repetitive on Iain Macleod’s bed of picked banjo but listen to it and you’re captivated. Barbara Bartz’s strings lift the chorus – just far enough.

The song is about travel, or rather the longing for travel, for getting away, for change. The last verse will ensure that this song resonates deeply with many of us.

Robin colours in his songs about love and life with guitar, banjo, ukulele, mandolin, piano, double bass, organ, percussion toys and any other instruments he can afford and fit into his little studio.

He has released three albums ‘Only The Missile‘, ‘Strangers With Shoes‘ and ‘The Nearest Door‘ on creative commons label ‘modifythevan‘.

The albums are available free on Jamendo so you could take a listen to them then, if you like them, get them from Robin’s site in way better quality.

This applies to all the stuff you hear on SnC. The show is encoded at 128k more or less as a sample for you. If you like what you hear, do buy the CDs or get the high quality downloads and really hear what all the excitement is about.

I had a note from good friend of the show Daryl Ramage from Brandon, Manitoba last month which I think I forgot to pass on to you. It concerns an young singer called Noah who has become something of a YouTube star.

I wonder who wore that voice in for him. A few years ago I saw a local girl of 14 sing with a local covers band – she prompted a similar “I don’t believe that voice is coming from that singer” moment. In the years since when has developed her repertoire and skills to make quite a name for herself in jazz circles although her fundamental voice tone has remained pretty much as it was back then.

One By One – The Trews (Toronto, Canada)

THE TREWS return to the U.S. for a run of summer dates in July in support of their fourth full-length studio album, Hope & Ruin.

The Trews began their mini-tour on July 18 at their familiar haunt, Artpark in Lewiston, where they’ve played multiple times to packed crowds in the thousands.  The quartet then headed west to Wisconsin and Chicago before heading back east to Philadelphia (at The Grape Room tonight) , Asbury Park, NJ (tomorrow at The Saint) and finally up to Shashkean in Manchester, New Hampshire to close out on Friday July 27.

Hope & Ruin is a level-raising evolution for the Toronto-based rock band with two gold records, 13 top-10 singles and 900-plus concerts logged. Recorded live-off-the-floor, they captured lightning in a bottle, resulting in a sound that is raw, electric and igniting.

Current single ”One By One” is from the 12-song Hope and Ruin album has a feel that can only come from four guys that have played together for 14 years.

This rhythmic journey is lead by the hypnotic vocals of front woman, Jezzy (Jessica Eisenberg), who fearlessly routes your way through 9 rousing songs which will make you subconsciously fall victim to her melodic rapture.

Tasmania is Australia’s smallest and southernmost state. Removed from the mainland by sea, it is reasonably famous for Errol Flynn, pinot noir and being the closest population centre to Antarctica.

Four piece alternative band Enola Fall call this place home, specifically the capital city of Hobart. The small, isolated island is a place that few recognize, and in many ways exists as a vacuum. This is just one of the reasons that Enola Falls’ music is quite different, often described as “unconventional.” Since their formation several years ago, they have begun to add their name to the state’s modest list of accomplishments.

Rah Rah, the Regina, SK alt-pop ensemble are all about releasing their music.

They released their sophomore album Breaking Hearts, in June 2010 (on Young Soul Records).

Over a bit of collective band downtime, Erin Passmore and Marshall Burns from Rah Rah released solo/side-projects, and the band decamped to record their next album with illustrious indie-rock producers Gus Van Go and Werner F. That new album, The Poetʼs Dead will be released digitally on September 25th and in stores from October 23rd.

An EP of non-album tracks, called Little Poems popped out last month to prepare listeners for the awesomeness to come.