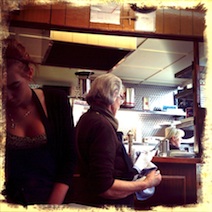 Who says the CD is dead? I must admit that they are something of a rarity these days but this week, Andy the postman has been hauling them up from the road almost daily.

Meanwhile, London is preparing itself for Podcrawl on 23rd. I found this classic cafe near Liverpool Street station. There really aren’t many of this vintage left. Come to think of it there aren’t many places to get a full breakfast for a fiver any more. Lovely staff too.

The album Kill The Static arrived a couple of days ago from Patric Westoo, who is the driving force behind Latvian Radio, and it’s a cracker.

It is one of those albums that has a familiar, almost retro feel to it but is as fresh as the morning dew.

LATVIAN RADIO has spent the better part of a decade crafting it’s own brand of lyrically charged and sonically intelligent indie-power-pop. Amplifier Magazine labeled their songs “Music as both entertainment and art. Truly the best variety.”

Their brand new release “Kill The Static” picks up where their first two critically acclaimed albums left off while digging even deeper into the psyche of prolific NY based songwriter Patric Westoo and his sonically dense, yet impossibly melodic backing band.

Latvian Radio has been a mainstay on college radio since their debut release “Happiness Above A Hardwood Floor” on 2006. Their second effort “Seven Layers Of Self Defense” made the CMJ top 200 chart for five straight weeks. Absolute Power Pop had it on their year end list for best albums of the year in 2009.

British born, NYC based Anna Dagmar grew up a pianist steeped in classical repertoire but also drawn to the excitement of jazz improvisation. She earned a degree in jazz piano performance and music education from Eastman School of Music in Rochester, New York.

Recently, however, one of her most stirring lessons came while frequenting the local folk scene. The vigour and purity of folk music and its connection to the human story, was a revelation that changed her lyric approach on Satellite. “For these songwriters it’s more about lyrics than music. For me, it has been more about the music. I could really grab onto their words because they were so tangible. My past lyrics were poetic, and the music painted the text, but you couldn’t easily take hold of the stories,” Dagmar reveals. Through immersing herself in the folk scene she realized, “When you’re open and direct, the audience can enjoy the songs more because you’re inviting them in.”

Blade of Grass has its roots here in LA where the two friends met at UCLA. Michael was studying Ethnomusicology and Joshua was studying acting at the School of Theater, Film, and Television. The two bonded over trips abroad, world music classes, and participating in the vibrant local scene of music and activism. Michael Hurst also took part in the UCLA jazz program, studying with the likes of Kenny Burrel and Herbie Hancock.

“Covela Jam” is a fast and choppy reggae beat that lyrically espouses the concept of disenfranchised people unifying and leveraging their strength in numbers. It harkens to the ‘rebel music’ of Bob Marley and The Clash but has an updated sound. It is on their California Dreamin’ EP

So you may find the members of Blade of Grass at an Occupy encampment or taking part in a Sweat Lodge in Mexico. But most likely you will find them on the grass at Barnsdall Art Park (outside of Frank Lloyd Wright’s famed Hollyhock House) in East Hollywood. This is where they meet regularly to write new songs. Listen for the guitars and the harmonium and ask them to play you a song.

Plushgun is a project birthed in the cramped confines of Dan Ingala’s overpriced and undersized “bedroom” in New York City. While writing a song on his acoustic guitar, Dan had an idea: “What if I added some synths to this?” And synths he added, and this song is known today as “Just Impolite.” Dan incorporated the name Plushgun to this project, as in something soft, something killer.

When people started to demand live shows, Dan was scared. It was just him and a computer, and computers tend to be terrible showmen. So he asked for help from his friends. Today, the Plushgun lineup consists of Dan on vocals, keys & ukelele, Matt Bogdanow, whose ability on the drums was unmatched, on well, drums, and other guest musicians and vocalists are added for live shows.

With Me.Me., this once electronic band aims to take the leap toward real instruments, yielding songs that are nostalgic, poppy, danceable and surprisingly deep. Whether they are about chasing dying romances, high-school anxiety or angst-riddled anthems for the “_______” generation, Plushgun tackles these themes and makes them unapologetically fun.

Zucchini Drive, comprised of Marcus Graap and Tom De Geeter, has a knack for cooking up surprising music from unlikely ingredients. From their initial beginnings in 2002, the pair tackled the challenge of melding the lo-fi acoustic sounds of De Geeter and the buoyant electronic landscapes of Graap. The duo has taken their contrasting backgrounds and geographical distances to create an unparalleled energy.

Working in remote locations, like London and Belgium, Zucchini Drive has put together their latest project No Food but Lots of Weapons. Completely self-produced, this album is a combination of where the duo stands as artists and their take on a 2012 world.

Their first single, “Jaguar Sky,” brings a set of strong vocals and a building energy to make for a great example of the Zucchini Drive’s capabilities. This single is now accompanied by a music video that depicts the members performing against a city backdrop. The album, No Food but Lots of Weapons, will be available on September 25, 2012 via Marathon of Dope.

How Does That Work – Trevor Sewell w/Lorraine Crosby)

Trev has made it to the finals of the British Blues Awards for his track Hate Me For A Reason in the Kevin Thorpe Best Original Song category. I played that track a couple of weeks ago and following a conversation Trev and I had then, he’s put a player with a free download button onto his site. If you enjoyed the track, it can be yours.

He’s also got a limited edition CD out now on W.A.R. Records (an Austrian label) which is basically the Calling Your Name album plus four bonus tracks including this fascinating monitor mix for a duet he’s recorded with Lorraine Crosby (best known for the Meatloaf hit “I would do anything for love – but I won’t do that”.

Check out the finalists of the Brit Blues Awards and possibly vote for Trev before 30 July) at:

I notice that our friend Matt Andersen is also nominated, but in the Overseas Artist section

23 June around the lovely old pubs of Soho starting at The Argyll Arms in Argyll Street, just off Oxford Circus. Details in the Podcrawl Facebook page.

But basically it’s a midday start at the Argyll Arms and then on to The Clachan, The White Horse in Carnaby Street, down to The Crown in Brewer Street, St James Tavern in Windmill Street, etc, etc. Quite possibly ending up at The Pillars of Hercules in Greek Street and The Dog and Duck in Frith Street.

Check out the Facebook page and take this as your invitation to join us for some or all of the crawl. We’ll be tweeting all day with the hashtag podcrawl so you’ll know where to find us. Codger will be there as will Dave and Caroline Lee from the Bugcast, Gabor from Electrical Language, Justin Wayne, Ro Cutler, of course, and rumour has it that Sarah Morrison from Insomnia Radio New York will be there, although if she doesn’t get edition 15 of IRNY out before the 23rd – she may face some sniggering from the assembled company.

After just wrapping up a 3 month tour of visiting over 60 high schools in Canada earlier this year, the band has been cutting their teeth on the road and are finally ready to share some new material with fans. To support the new release Crystalyne will be kicking off an extensive tour on June 2nd in their hometown, Toronto.

The lead single off “Navigate“, “Wolves” has a compelling video to go along with the equally compelling track. The song showcases Dattoli’s impressive vocal range and the bands skilful blend of aggressive rock and melodic pop. “Navigate” is available digitally now.

June 29 @ The Academy of Music, WOODSTOCK