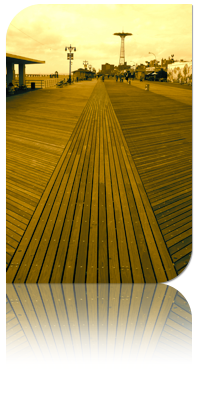 Suddenly early spring has turned into full-on summer here on this part of the east coast of England. I think this may be reflected in this week’s choices of music.

Throw your cold drinks and towel in the back of the car, flip the roof down and let’s head for the coast.

Well, Coney Island (see pic) could be fun but right now I’d settle for a quiet pint somewhere on the relatively remote and undeveloped Suffolk coast.

Formed as NYU students in 2009, Beast Make Bomb have toured the country in support of several acts, including Cold War Kids, Tokyo Police Club, and The Whigs. The band was also featured at Rolling Stone Magazine’s 2011 SXSW showcase, sharing the stage with Queens of the Stone Age. This year, the garage-pop quartet is returning to SXSW to play a string of dates in the midst of their southern tour. As the group puts it, “We are young spirited grungey transplants living in Brooklyn and we want the rawness and high energy of our live performances to spread far and wide so that when people read about us they feel like they must go to the live show to get the full picture of what Beast Make Bomb is.”

The band formed as a duet with Pete and Amanda Wells and then soon expanded with drummer Aaron Hamel. Although additional members have come and gone, the three have remained the core.

On SnC a couple of weeks ago (show 320) now a second track. Q&A interview with CMJ.

Kishi Bashi’s debut full-length album 151a is a bright and soaring avant-pop record written primarily on violin – his main instrument which has brought him to record and tour with the likes of Regina Spector, Sondre Lerche, Alexi Murdoch, of Montreal and more. The first two singles “It All Began With a Burst” and “Bright Whites” have already been getting attention from SPIN, Consequence of Sound and more.

The album really is worth a good listen. You’ll find it on Bandcamp and on Joyful Noise Recordings.

Q&A interview with CMJ at www.cmj.com/feature/qa-jishi-bashi/

Where Is The Way – Ourlives (Reykjavik, Iceland)

Since the band’s formation in Reykjavik in 2005, Ourlives focused on recording as much music as possible in the quest to perfect their sound. With influences ranging from bands like Muse to Radiohead and Coldplay, the band continuously experiments with different sounds, and has refused to release an album until they are satisfied that it feels and sounds exactly the way they intend it to.

In 2008, they finally released the first single from what would become their Icelandic debut album, We Lost The Race which was well received by critics and music lovers alike.

With the release of the debut album behind them (as well as its subsequent follow up), the foursome have now set their sights on the US. The band’s debut US EP, Out of Place, which is available now on Seattle’s Spartan Records.

The Neighbourhood is the band that I could tell you nothing about a couple of weeks ago and they’ve cropped up again. This time Amanda at their publicists The Musebox, sent a note:

By now you’ve no doubt done some (frustrating and nearly fruitless) digging of your own in an attempt to pocket a few rare nuggets of info. on the Newbury Park quintet who everyone is blogging about. Yes, we’re talking about The Neighbourhood. That band that you’re currently obsessed with sharing with all your friends but know next to nothing about.

Well, the good news is we not only have a sneak peek of their next single, “Wires,” which will be available 4/30/2012, but we’ve just received news that The Neighbourhood has announced the impending release of their debut EP, I’m Sorry, which will drop 5/7/2012.

After releasing “Female Robbery” on Zane Lowe’s BBC Radio 1 show, it quickly became apparent that The Neighbourhood would have no problem finding a home for their brand of infectious indie rock and hip hop expertly melded with youthful melodies and a soulful croon.

So now we know.

Mitch Silver (real name David Grellier) born in 1979, is also the founder of the musical projects College and Valerie.

Their first albums were released as burned CD-R by alternative distributors like Wonderground. An EP and an album were then released in 2009 by Scandale Records. Their most recent album, Cyril was released in July 2010.

Sydney won our artist of the Month feature a couple of months ago and she’s got a new single out with a rather fetching video that was partly shot at a performance I was at  in New York’s The Living Room last October. It is playing exclusively on Time Magazine’s site: http://entertainment-time.com/2012/05/14/sydney-wayser-potions-music/

Any excuse to play another track and to suggest that you pick up the whole album for yourself.

Sydney launched the Bell Choir Coast album in Los Angeles last week and will be doing so in New York tomorrow night at Joe’s Pub.

Sydney is also on Blitzen Trapper’s upcoming tiour kicking off in Denver on May 29th.

Check the dates on her site.