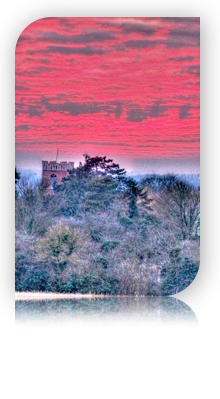 I’ve been getting a sudden gush of party invitations over the past couple of weeks but I’ve had to turn them down because, by strange coincidence, they are all in Austin, Texas.

Yes, SXSW (South By South West)kicks off on Friday, with the music festival from 13-18 March so quite a few tracks this week are from artists that will be playing shows in Austin.

OK, so the pic has been “enhanced” a little but it was an amazing sunset.

Fearless honesty, poignant lyricism and powerful melodies are the textures used to weave singer-songwriter Allison’s Invention’s (formerly Allison Tartalia) unforgettable music. Her compelling and expressive performances have charmed and thrilled audiences throughout the country. Allison’s Invention’s new adult-alternative project, Sweet and Vicious, is a lush melodramatic pop EP. The songs feature Allison on piano and a variety of vintage keyboards, with strings and horns creating a lavish soundscape. On Sweet and Vicious, Allison’s Invention proves that she is ready to bring her music and her career to new heights.

A staple on the New York City music scene, Allison is no stranger to accolades and applause. Last year she was nominated for an Emmy alongside fellow composers for the music that they created for the documentary 5,000 Miles From Home. Her debut CD, Ready, garnered enthusiastic praise from The Village Voice and The New York Times. The Deli Magazine (Brooklyn) said, “Allison Tartalia distinguishes herself for a slightly aggressive songwriting edge and for sophisticated arrangements that range from the orchestral to the electronic.”

Heralded as a favorite among Canada’s new breed of independent musicians, Dan Mangan’s travels initially took him everywhere but home. Spending most of the last six years toting guitar and merch-sack, Dan experienced Vancouver as more of a resting place than roost. He toured nearly non-stop in support of his debut albumPostcards And Daydreaming, testing his words, honing his craft, and building a dedicated following. Graciously, if un-strategically, Mangan pretty much accepted every gig that came his way. He train’d and plane’d on his own throughout North America, Europe and Australia because he couldn’t afford to bring a band along. When he cobbled together funds to get a second album made, he enlisted Toronto based producer John Critchley and spent weeks at Green Door Studios, bringing in musical collaborators from around the country. By the time that sophomore album, Nice, Nice, Very Nice (named in reference to a Kurt Vonnegut calypso) hit the airwaves across his homeland, Dan had already cut his teeth on the road.

Recently signed to Arts & Crafts, the trail-blazing indie label that brought us Broken Social Scene, Feist, and Stars, Dan Mangan is the first on their roster from the Pacific Northwest. Though Vancouverites once envied the thriving music scenes of Montreal and Toronto, Mangan’s rain-soaked hometown has since developed a potent scene of its own – in recent years, its eclectic and supportive musical community has produced the likes of The New Pornographers, Ladyhawk, You Say Party! We Say Die!, Black Mountain, and Japandroids. Mangan is yet another native son of this emergence.

Yet another track from the wonderful Gadjo who were Adnams Artist of the Month back in October. It looks as though they’ll be in the UK in June so, if that’s where you are, keep an eye open for dates.

The most popular track on Jamendo this week is by an old Suffolk ’n’ Cool favourite, David TMX.

From his brand new album released just a couple of weeks ago on Jamendo called Le core et l’espirit which you can download free and legal from Jamendo.com although, if you’d like to make a donation to David TMX, you can do so very easily at the site. The album is at www.jamendo.com/en/album/106374

Well, it transpires that this is rather rude (thanks to Yannick at Euterpia Radio for spotting that before it was played on the squeaky clean AMPed show!)

Winnipeg is known as the “Heart of the Continent” and in this beating heart on the prairies, there is always new music being made. Imaginary Cities was born in an underground club, in between sets. Founded in a chance meeting between Rusty Matyas (The Waking Eyes, The Weakerthans) and Marti Sarbit (The Solutions), the duo’s debut album, Temporary Resident, is being released across the globe on various labels (Hidden Pony, Turnout, Votiv, Grand Hotel Van Cleef, and Shock) in 2012. After performances at SXSW and NXNE, a spot on the prestigious Polaris Music Prize long list, an opening spot on the Pixies’ North American tour, Canadian dates with Rural Alberta Advantage, a spot on a Paste Magazine music sampler, and a European tour that included a showcase at MIDEM, they are fast becoming one of Canada’s most talked about new bands.

Royal Canoe is a group of musicians on a mission to construct ambitious, inventive music; creating samples by running conventional sounds through unconventional pieces of gear, drumming on bathtubs and garbage cans, listening to Big Boi and manipulating bits of old records. The band calls Winnipeg, Manitoba, Canada home – the enigmatic prairie city, which has served artists as both an abundant, creative watering hole and a debilitating quagmire. Royal Canoe’s songs are an effort to make sense of resentment and romanticism of the city’s divergent identities. The band’s debut effort, Co-op Mode, helped win over audiences across Canada as the band toured throughout the country. Royal Canoe releases its latest EP, Extended Play, on February 21, followed by a tour of Canada and the U.S.

A superbly constructed and performed song. This is quite a different version to the one that he performed live for us here in the barn a few months ago. This track is at once polished, raw and heart-felt.

Matt is back at The New Crawdaddy Blues Club in Essex in a couple of weeks on 29 March. It’s a great club with a wonderful attentive audience of lovely people. I’ll be trying very hard to be there. Join me if you can.

Do take a look a the video of a performance which was part of a Suffolk ’n’ Cool Session at the Barn that we recorded last summer.