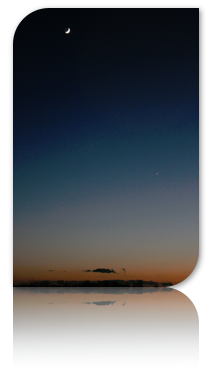 The second half of our 20 to watch in 2012. Each of these artists have impressed me in 2011 and I think they are likely to attract significant attention in 2012. They certainly deserve it.

There have been somne lovely moonsets this week and, when it isn’t pouring with rain, and some great coloured skies.

They have won the support of legendary producer/engineer Tony Platt (Bob Marley, AC/DC, Sparks) describing them as “a favorite of [his] for quite a long time now”, and adding “they deserve their music to be heard far and wide”, and of British magazine, who picked them as one of their favorite acts of the 2010 Iceland Airwaves music festival, as well as other newspapers and music industry figures from Iceland.

Last February, they released their first EP, “Prelude”, which remained among the top selling albums of fair-trade website gogoyoko.com for four weeks without any promotion.

Take a look a their videos on YouTube at:www.youtube.com/theesotericgender

I had the great pleasure of catching Ólöf Arnalds on my first night of CMJ last year. After a pretty stressful  journey from JFK into the city.

Music publicist Ariel Hyatt had called me to say get to the show because it was stunning. In that respect, as in so many others, she was dead right.

Ólöf was playing Googie’s Lounge (upstairs at The Living Room) on Ludlow Street in the heart of the LES and was the perfect antidote to a day of pressure and deadlines.

There is such a lot of remarkable, creative and, above all, beautifully crafted music coming out of Iceland these days. Perhaps it’s something to do with the long dark nights. I have a theory that music takes time to ferment and mature a rushed song is like home-brew beer, created and finished too fast, overheated and not at all palatable. Is it just me or can you feel the space and depth here in what is after all a fairly stright-forward song.

Folly was written and recorded over the course of several heat waves and snow storms by May and her cohorts in a rotating cast of bedrooms, basements, and attics across the District, bearing witness to two foreclosures, a bit of squatting, a larger bit of eviction, and a subsequent life shuffle that would rival that of a wind-addled gypsy moth.  This patchwork, guerilla style recording, which grew out of necessity, ultimately served to instil a sense of tension throughout the record leaving one hanging on despite the imminence of something so delicate falling apart.

Cog in the Machine – Will Knox (Brooklyn, New York)

One of my favourite songsmiths and a great performer. Will is an Englishman based in New York although he’s over here on this side of the Atlantic for a few dates:

Do check out Will’s site for a great video of this song and a fabulous performance of The Ship & The Storm.

“Built on the solid foundation of Matt Bishop’s songsmithery– […] the band creates lush propulsion that is far less assuming and rowdy than the sheer mass of musicians on stage would have you believe.”

Although the name Franco & The Dreadnought suggests the project is a full band effort, Franco actually plays all of the instruments on his recordings; the Dreadnought being his Martin DXME Dreadnought acoustic guitar.

Since going solo, Franco has been creating a name for himself on the festival circuit resulting in a number of other opportunities coming his way which is enabling his music to be heard by more people.  His biggest achievement to date though, has been being personally asked by the Archbishop Desmond Tutu to write a song celebrating the life of Nelson Mandella which was presented to him as a gift on his 90th birthday.

Further information on Franco & The Dreadnoughts including information on how you can download his new 6 track EP for free can be found on his Facebook site and executed at Soundcloud.

You can buy your badge to access all the showcase events and film screenings and if you’re an artist and would like to play CMJ, submissions process is already open.

Check it all out at www.cmj.com/marathon

I met Gangstagrass mastermind Rench in the exhibition lounge at CMJ’s main location in NYU.

Love what they’re doing or hate it, they don’t leave many listeners unaffected. Their highly accomplished rural bluegrass playing is combined with an urban sound to quite extraordinary effect.

Grace Woodroffe made a big impression at CMJ in October. It was my first expereince of her amazing range of styles and expertise in each. Certainly an artist to watch this year.

This is an intriguing and enticing combination of almost introspective close up singing and out and out rock. From her current album Always Want.

Slight interruption to normal AMP service last week- the site is apparently getting too popular.

Dan has been ready and waiting to present 316, and he’s still there for you at

Ro Cutler at Dark Compass will be up with AMPed 217 from Monday.

They are one hard working band, playing multiple gigs every week.

Jimmy gave me permission to use his track as the sig tune for Suffolk’n’Cool around six years ago – I bet he didn’t expect it to still be going strong this far down the line!