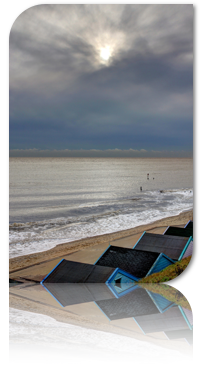 In SnC this week. An update from the John Peel Centre appeal and the winner of the Adnams Artist of the Month for November. Ah, that would explain why I was in Southwold this morning – another perishing cold day but with intersting skies and a great time with Tyler at The Crown Hotel.

Scout have been about for a long time and have just released All Those Relays, the first album since 2003. Driving force Ashen Keilyn deconstructed her band and put it back together piece-by-piece. New player, new producers and some great songs inspired by music, film and the idiosyncrasies of everyday life.

An EP called Pi is available now on Invisible Brigades

Well, it is happening. A mini festival in John’s name is being planned after a bunch of artists who John had promoted back in the day approached the project with offers of playing a benefit gig. Leading the pack was `the Undertones and coming onboard more recently are The Wedding Present and Bearsuit (subject to dates) there are at least another 5 artists with whom discussions are progressing well. Including some very well known names.

The great thing is that if you pledge £50 to help make the John Peel Centre for Creative Arts a fitting tribute to the man who did so much to enable independent music, you’ll get a certificate, signed by Sheila (John’s wife), your name in the Benefactors Book held at the centre, a download of `Going Home (A previously unreleased documentary in which John returns to his childhood home plus one free ticket to the John Peel mini festival in 2012.

Time is getting tight to raise the £25,000 “match funding” by Christmas that will release the £500,000 needed to undertake the next phase of the project.

In this newest release you can hear the remixed music of the Budapest based jazzy rocky band Smarton trio. Among the remixers are some well known producers of the Budabeats netlabel, but also new partners, featuring star DJ’s of the Budapest underground nightlife. Besides M.W.D. and Suhov, Dermot, JumoDaddy, Savages y Suefo, Ba10&Bal or Franco Mento (CH) are those who have electronically toasted the original guitar, voice or Hammond-organ tracks. That’s how jazz becomes techno, ballad gets broken-beated and surf rock melts into electro-soul.

Budabeats describes itself as Hungarian Freestyle – I like that.

Of course if you like a bit of dub do check out the wonderful Angel Dust Records http://angeldustrecords.com

We heard the track on show 282, back in July. Now the accompanying video is available for your viewing pleasure, still with the same careful editing but somehow, being able to see Novi singing the lyrics, makes them much clearer. The song is a hoot.

The video is in the shownotes for show 302 – go on treat yourself.

More music from Novi can be found on various web sites and social networking sites such as Reverb Nation, Facebook, and Soundcloud. You can visit the official Novi website for music, news and links.

“In the past our individual passions leaded us through different music paths, which often run across somewhere here – in Bieszczady (Carpathian) Mountains.

We all come from this place (from Cisna, Ustrzyki Dolne, Sanok) so we decided to come back, live and act here.

Since 2002 we took joy and toil of common transmigration, connected our energies and created band for which traditional music of this Mountains become rich inspiration of many motives.

Caring for traditional repertoire we draw inspiration from łemkowski, bojkowski (kind of ruthenian) and polish folk, keeping at once original words, language and melody. However we connected all this with energy of present day sound. Our music arrangement are results of different styles – You can find in it elements of folk, blues, jazz and rock. For that reason we were able to take the same way where tradition become present day and common transmigration become passion of discovering traditional folklore. During our concerts we propose meeting with traditional music of Carpathians in the new arrangement, full of passions.”

Tyler Torrance is head chef at The Crown Hotel in Southwold and brings masses of international experience and real fair to the role. He’s also a fabulously enthusiastic character, and a musician.

I caught up with Tyler this morning at The Crown.

She gleaned much of French culture from her songwriter father, leading her to musical influences that include Edith Piaf, Charlotte Gainsbourg, and Jacques Brel, among many others. This European sensibility is evident on both albums The Silent Parade and The Colorful.

Our Graham’s got a colour theme planned for AMPed 314.

And it is a very happy seventh birthday to Dark Compass

Toronto based singer songwriter Kae Sun turned to his native Ghana for inspiration for his new EP, Outside the Barcode. The return to his homeland after nine years of living in Canada renewed his drive for creating the raw and non-commoditized artistic experiences that shaped his passion for music.

Outside the Barcode is an authentic and reflective collection of songs that showcase Kae’s growth as a songwriter, storyteller and guitarist. Written while traveling the African countryside and recorded on 2-inch tape on a farm in Ontario the raw acoustic songs recall the sense of community and authenticity that inspired the tracks. Kae’s focus was to create a more shared listening experience rather than dictating his audience’s experiences.

“It’s not about making music to get something out of people, but rather sharing experiences, capturing moments and communicating through music and lyrics,” he says. The result is an EP that conjures the collaborative spirit and culture of sharing that Kae experienced in Ghana.