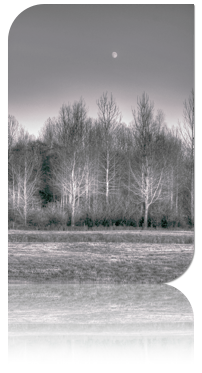 Ah well. Some day are like that. A frantic 17 hour day due to external and family needs left me with little time and strength to filter down to a full complement of songs but what we do have are really interesting.

Winter arrived here in Suffolk this week, leaves have left, leaving some magnificent trees – like these by the River Deben near Easton. Yes, that’s tonight’s moon as it was rising at dusk tonight.

I had the pleasure of hanging out with Shayfer (described as the Villain King of New Jersey’s underground noir-pop music scene” along with Dusty (percussion) and Sarah (saw) – yeah that’s right she plays the saw) at a party in Brooklyn a year or so ago. What a great guy with a wicked sense of humour.

Picture of Sarah and her saw athttp://tinyurl.com/2e9b9ny

This album sounds much more produced and rich than his previous work – talking of which, you’ll find another track on SnC 243.

Coleman Hawkins reached a new level of creativity during the 1940s. This collection focuses on those years, presenting the original master of the tenor sax in a wide variety of settings, including his encounters with young modernists like Dizzy Gillespie and Thelonious Monk.

As Wikipedia has it: “Coleman Randolph Hawkins (November 21, 1904 – May 19, 1969) was an American jazz tenor saxophonist.[2] Hawkins was one of the first prominent jazz musicians on his instrument. As Joachim E. Berendt explained, “there were some tenor players before him, but the instrument was not an acknowledged jazz horn”.[3] While Hawkins is most strongly associated with the swing music and big band era, he had a role in the development of bebop in the 1940s.

Marla Mase is a writer/performer/producer/singer/songwriter from New York City and she’s been on email with me  (lots) for the past hour or so. She writes songs, plays, monologues, short stories, erotica, blogs,and poems. She is known for her gutsy, sexy, raw, performance style and her intelligent lyrics.

Marla’s co-writer and producer is internationally renowned guitarist/ recording artist Tomás Doncker. They are now working on her 3rd CD, personal affairs, scheduled for release in the Fall 2012.

The centre desperately needs to raise some money which will in turn release a significant grant to really develop a fitting tribute venue to the work of John Peel. Codger has recorded a really heart-felt appeal at petecogle.com

Ever since they were brought together as the backing band for Don Carlos, Dub Vision has flaunted a passionate, energetic, animating force earning fans worldwide. Dub Vision consists of some of the powerhouse reggae musicians on the US west coast, including Hodge, Toho, Night Sun, Jamie, Gavin, Balboa, Tony, Gabe, Wadi, and other guest musicians consisting of hundreds of years of musical experience.

The band was originally formed as the backing band for reggae legend Don Carlos and has toured with Don since 1999, torching the four corners of the world, including the continents of North America, Europe, South America, Africa, and Asia. Other artists Dub Vision has backed include Dillinger, Charlie Chaplin, Sister Carol, Everton Blender and many other reggae artists.

With the “Counter Attack!” album, Dub Vision has moved from the back to the front, giving fans a taste of many different styles of reggae and dub they have played along their journeys.