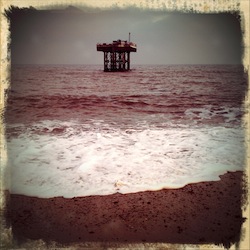 A particularly late start to recording the show this week. Life really is getting to a crazy pitch with so many dear people around me in real need of time and effort – none of which I begrudge in the least. I’m just getting pretty worn down.

Oh well, we’ll be using the five hour grace afforded by the difference between Greenwich Mean and Eastern Standard Times.

This week’s pic was taken at dusk this afternoon just to show that Suffolk isn’t all beautiful, although a lot of it is rather interesting. This structure is offshore at the Sizewell A nuclear power station.

Got To Me – Ten Year Vamp (Albany, New York)

They are one hard working band, playing multiple gigs every week. You can catch themn in West Springfield MA, Newburgh, NY and their home town of Albany NY in the next week.

Fourth album of the Dutch composer Mo Rooneh. The machine as inspiration but also as leading instrument within the compositions.

Following two concept audio projects and an EP, this is the next phase in his career, in which Rooneh’s fascination for industrial sounds characterize his fourth work.

The pneumatic pulsations from inside the metal casings and the noises that transform into soundscapes, form the basis for the majority of the tracks on this album.

Next to drones and arpeggiated chords, also the frequent use of sample loops and the overall production give the work it’s mechanical sound structure.

Guineafowl played their first show in the USA a couple of weeks ago and, very fortunately, I happened to be there.

If you listen very carefully you may hear a rude word in this track – a few times.

A direct submission to SnC.

May Stands Still is an Acoustic Pop/Folk group, currently working on their sophomore release, a full-length album due out next April. Soldier is one of the pre-released singles off that album.

The band very recently completed a fundraising drive on Indie GOGO and raised just over the $7000 they need to record and release their new album.

Serge (SaReGaMa) dropped me a line to let us know that after a three year break, he’s back with a new album. This is the title track. It was published yesterday and is available for download from Jamendo at:

Thanks to Erk in Sydney for presenting AMPed last week. Rodrigo is in the chair from the Azores Islands on Monday (providing the chair arrives).

After seven years of touring and writing with Nashville based outfit The War, Daniel Levi Goans recorded Choice Cannonballs in the heat and humidity of a North Carolina summer in the very basement where he discovered his love for playing music as a child. His early explorations of the piano evolved into an attempt to capture the rich tradition of American folk. The songs are stripped down tributes to the folk storytelling tradition with sparse soundscapes that evoke the feverish density of the summer in which it was recorded.

Goans retreated into a small wooden library overlooking the Chesapeake Bay to record his second solo release. With over 50 songs prepared, he intended to echo the sultry Carolina-Folk accents of his first release, but the rhythms of the tides began to speak into his music. The walls, the shelves, and the spines of the books became a percussive backbone for the songs. The winds whipping in from the bay opened up space for the words to resonate, fortifying the unadulterated honesty of his writing.