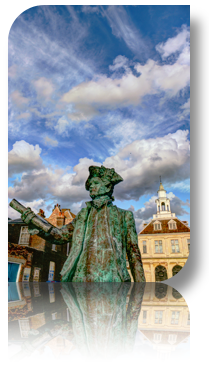 Pulling a late one this week … and thankful, once again, that the Libsyn server is in Pittsburgh – it gives me an extra five hours to hit the midnight deadline!

Why so late? Over the past few weeks pressures have been growing from aging but much loved parents. This has entailed quite a bit of time away at the same time as a project to build an annexe for one of said parents is hitting critical and demanding phases. I fully intend keeping to the normal weekly production schedule but if I slip once in a while, I hope you’ll understand.

Canadian listeners, in particular, may recognise Captain Vancouver who was born a few hundred yards from where I was born (but, I assure you, somewhat earlier). He was, by all accounts, a remarkably unpleasant man and it would seem he was keen to get out of King’s Lynn too!

Back with a remix album, Komiks EP released yesterday, of almost the same title as their full-length album Komiks Music, released almost exactly two years ago.

It makes an interesting listen and it is always great to have anything from Eclectek on the show. In fact this track isn’t on the longer album.

As ever, the beautifully precise and expressive vocals soar overhead deliciously counter-pointing the more dark and dirty instrumentation and hip hoppery.

We heard from Peg Simone a few weeks ago with a track calledPiece of Pie, a spoken story interweaved with guitar riffs and echoed vocals.

Yesterday I heard a remarkable feature in Word of Mouth on BBC Radio about a project by writer Lavinia Greenlaw that entails creating soundscapes and snippets of whispered and overheard conversation at a rail station. The resultant work Audio Obscruawill be available as an audio recording to be experienced on headset whilst wandering around St Pancras Station in London. It runs 13 September – 23 October.

That seemed like the perfect opportunity to play another track from Peg Simone which includes some gorgeous sounds and layered voice – it may seem a bit avante garde but do jump in and submerge yourself in the sounds.

Way To Blue : The Songs of Nick Drake

Here is a truly rare concert event for Australian music lovers. Following acclaimed, sold-out performances across the UK, a special evening called “Way to Blue: The Songs of Nick Drake” is on its way to the Sydney Opera House November 11 and the Melbourne Recital Centre November 14 and 15.

Curated by Nick Drake’s original producer, Joe Boyd (at the helm for two of the Drake albums – Five Leaves Left in 1969, and Bryter Layter in 1970), this remarkable concert brings together renowned contemporary singers united by their reverence for the material. It is an unprecedented tribute that honours the work Nick Drake left behind by gathering the collaborators who were involved in those unforgettable original recordings.

The band and string section is led by musical director Kate St John, anchored by double bassist Danny Thompson, who played on many of Drake’s albums, and features the original orchestrations arranged by Robert Kirby in the late 1960s and early 1970s. Sadly, Kirby passed away very recently, but not before conducting the string section at the UK’s very first ‘Way To Blue’ concert in May 2009. Now, ‘Way to Blue’ has become a tribute to Kirby as well as Drake.

Well the news is now out, Australian duo Luluc who I had the pleasure of seeing perform in my friend Ariel’s front room in Brooklyn last year are taking part in the concert. The concert will be all the richer for their participation and they have a fabulous opportunity to work with some legendary and highly respected musicians from around the world. Good news for all.

Here’s a video about the concert concept and some of the artists.

I Found You – Luluc (Melbourne and Brooklyn)

Although from Melbourne, Zoe Randell and Steve Hassett are now based in Brooklyn.

With the release of their debut album, Dear Hamlyn, Luluc has become a quiet sensation. Songs pared down to an essential core, the music of Zoë Randell and Steve Hassett is of austere and unadorned beauty.

Since their album’s release, they have achieved much, playing major Australian & Canadian festivals and being hand picked to tour with Fleet Foxes, Jose Gonzalez and Lucinda Williams.

Relocating from Melbourne, Australia, to Brooklyn in 2010, coincided with wide exposure for Luluc, with two songs, ‘I Found You’ and ‘One Day Soon’ featured in ABC TV series Grey’s Anatomy.

Like a whisper or a caress, Luluc hold their audiences entranced. Zoë’s unique alto is central and provides a strikingly beautiful counterpoint to her nylon guitar. Exquisite melodies are accentuated by Steve’s close vocal harmony and guitar accompaniment. Together they create a rich and deeply affecting sound.

On Your Side – Icarus Himself (Madison, Wisconsin, USA?)

“On Your Side,” is replete with love-soaked euphoria. Written about the girl our protagonist would marry, the song is about “trusting someone that’s close to you.” Built on a loop of a drum machine hi-hat and a fuzzed-out Casio synth. “I found it hard / to think of past times / I’ve stopped trying now / because you’re on my side.”

Icarus Himself was started by Nick Whetro in 2008 as a solo project and has developed into a trio to include drummer Brad Kolberg and multi-instrumentalist Karl Christenson. Career Cultureis the third in a series of auto-biographical recordings, beginning with Coffins, released by Science of Sound in May of 2009, followed by the EP Mexico, released almost exactly one year later. This new album was recorded at Science of Sound’s studio, engineered by Ricky Riemer and mixed with the band with the help of Riemer. Guest players include Michael Gallope on keys (Janka Nabay & the Bubu Gang, Starring, Skeletons), Jonathan Lang on keys and clarinet, Jacqueline Kursel on cello, and Rob Ferrett on tenor sax.

Their album Career Culture will be released on Science of Sound on October 11.

With twenty years of playing instruments, Will Croucher is a veteran when it comes to making music. Originally from Hamilton, Ohio, Will made his way over to Knoxville, Tennessee where he took to his garage, bedroom, and living room to single handedly record his newest EP, I’d Rather Be Dreaming. Will notes that the record can be characterised as a blend of shoegaze, grunge, and rock. With influences such as My Bloody Valentine, Pink Floyd, and Starflyer59, Will has created a personal style largely inspired by the ‘80s and ‘90s indie rock.

Some of Will’s other projects have included an ongoing black metal project called Swine Suicide and his tour with Millionyoung as their live drummer in 2010.

Through the use of piano, drums, guitar, bass, and his own vocals, Will manages to create a simplistic sound on his new EP I’d Rather Be Dreaming that is clearly rooted in pop-rock styles.

You’ll find Will Croucher via the Glowmobile Recording Company at

Maximino is the one-man soul baby of Gerald Perez. He has described the sound of Maximino as psychadellic soul that stems from orchestral minimalism and experimental folk. He uses a varying array of instruments (synthesizers, cello, and guitar to name a few) to achieve a large and encompassing sound.

You can, rather surprisingly, catch Maximino live at Will’s pub in Orlando, Florida on Sept 30 and Oct 3

The EP, Not So Cold, Cave is available at whatever price you’d like to pay through Bandcamp.

Do Not Disturb – The Esoteric Gender (Reykjavik, Iceland)

Now here’s a band that unexpectedly, really caught my ear.

Tony Platt who was studio engineer at Island back in the day has Esoteric Gender down as one of his favourite bands. Given his pedigree alone, they are worth a serious listen.

The Esoteric Gender might be born in Reykjavik, the world’s northernmost capital, but the band draws its roots from all over the world. Four members, four different countries: Lisa Jamesdaughter from Manchester, England and Jean-Christophe Salaün, from Caen, Normandy, France, formed the band and were joined by Thomas Brorsen Smidt, a drummer from Denmark, and Gabriel Malenfant, a guitarist from Quebec, who joined the adventure on stage. This partly explains their openness to the range of genres their music touches, from dance to triphop, from rock to electronica.

Take a look a the video for “They’re here” a bit more energy and rock sensibilities slip in there and watch out for the drummer’s gesture at the end. Says it all!