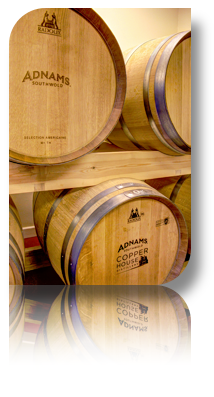 Though I say it myself a great mix of vary varied music this week from Scotland, Los Angeles, Toronto, Jersey City, Barcelona, San Francisco and from its twin city on the east coast of England, Cleethorpes. A full complement this week so sit back and give your ears a treat.

I’ve been meaning to show you the beauty and precision of these new oak barrels at the Adnams distillery in Southwold. I think we get so used to seeing battered old barrels used as garden planters that we forget how well-made they have to be.

I’ve no idea what’s in them but I can’t wait to try it – whatever it is!

Thanks as ever to Adnams and The Jazz Lawyer for their support of Suffolk’n’Cool. Really appreciated.

Keep Your Chin Up Kid – The Finest Hour (Cleethorpes, UK)

Taking their name from the words used in Winston Churchill’s famous speech, The Finest Hour carries a definite English connotation which is what the band conveys as they strive to put across their background and upbringing in their lyrics.

Despite all that their music was described as ‘Powerful stuff’ by BBC Radio 1 presenter Zane Lowe.

Check out more of their music on Myspace.

What time of year is this?

I just received my first dreadful Christmas-themed synthesiser-based song from a producer in Germany. Combining Reggae  and Christmas I would judge it as totally unsuitable for adults and children. Sorry, but you’ll not be hearing it on this show. But just remember, you heard about it first in August.

A remarkable voice, startling instrumentation and worrying lyrics create a perfect storm of slightly unsettling music which, like any art form, is exactly what it is supposed to do.

May McDonough and Co.’s story sounds a little like that abstract French film you saw once in college. You know there is a theme buried somewhere just out of grasp, and yet the bizarre imagery and odd characters leave you feeling a bit confused, a bit cultured, perhaps a bit enlightened, but mostly just exhausted. May McDonough is the first born child of a couple of private investigators who met on the job in the late seventies. May’s father started his own private investigations bureau, and May’s mother (who was known as Digger around the office) had just left her job taming lions, tigers, and elephants for Hollywood for a more cerebral job in the p.i. field.

Stemming from such unique individuals as these, May was born to be a wild card. And her life is supposedly as intriguingly unique as her parents, if not more so. In her own words ‘I seem to be a magnet for strange happenings that no one would ever believe to be true’.

Now May plays with her ragtag band of junkyard dogs. Her band wails away at lead pipes, trashcans, and overturned bicycles, as she sludges through chords and eases through chest-searing vocals that open even the most tightly crossed arms.”

A fresh 5 track release from Richard Citroen and Lola Dee. New York Stories is another electronica look back to French and European songs from the sixties.

But don’t let that put you off, this is good music. In fact Lola Dutronic’s second album “The Love Parade” was nominated for a Grammy a couple of years ago.

Raised in households where a myriad of music was played and appreciated, from Pink Floyd to The Allmans and Chuck Berry to Joao Gilberto, it comes as no surprise these artists create such diverse tracks. All having been introduced to pianos and drums in the grade school years, they acquired their addictions early on to the creative process and performing craft. Through a series of mutual crossroads in the Catskills and New York while supporting others, Government Mule and The Violent Femmes, these musicians met and formed their own project The Devyl Nellys.

Gigs in music towns, parties and colleges across the US led to genre development by songwriter Nelly Levon and guitarist James Mastro (The Bongos). Their distinct 60 bohemian rock style took shape after experimental jams and studio sessions at Retrophonics with Jim DeVito (JJ Grey & Mofro) and Bill Chapin (Justin Timberlake). Conflicting frustrations with mainstream art and life led to sharp lyrics that are frequently empathisized, and rarely sang. Like many contemporaries, they denied the urge to conform and pursued the independent route to showcase their arrangements. Recently, they’ve been heard on the festival scene, live venues, songwriter circles and across radio, television & film.

With a sound that has been described as “GipsyCumbia BalkanicSka WobbleySwing” Gadjo’s fourth album Gadjistan Zizany is exuberant and eclectic, raucous and tender. An explosion of voice, horns, flute, clarinet, accordion, double bass, guitar and percussion. The multiple styles of gadjo come together to forge the diverse but not disparate characteristic Gadjistan flavour.

They’ve been busy performing over the summer in Germany, Spain, Hungary, France, Denmark and their home Catalunya. They are playing a couple of festival dates in Barcelona later in September.

The album was released yesterday on the Whatabout Music label.

“Gadjo takes you on a wild journey from the middle of a jumping ska-mosh pit into the brassy arms of a drunken fanfare. After waltzing a chanson francaise under an African sky, you’ll tumble giggling into mediterranean streets for a bit of salty swing. Then, bewitched by love songs, you’ll dance yourself dizzy at an all night Balkan wedding party.

From all corners of the world they tumbled into the streets of Barcelona in 2003 and have been together ever since writing their original blend of polyglot balkan-ska-swing music. Since then, Gadjo has produced three albums, attracted a huge international following and has toured Europe extensively playing in theatre, circus and music festivals; up trees, on barges, in bars, beaches, on horse-carts, on top of trucks, in clubs and castles.”

I was born – Trapped in Kansas (Scotland)

Trapped in Kansas formed in 2008 and have been on an exciting journey ever since. This multi-national 4-piece comprises Finn LeMarinel (vox/guitar), Colin O’Hara (guitar/vox), Christopher Ward (bass/vox) and Iain Symes-Marshall (drums). Together they create mathematically intricate music that aims to be both thought provoking and sonically magnificent.

Trapped in Kansas have built up a strong and exciting reputation on the Scottish music scene. ‘How To Go’ is their debut EP which will be released this month through their own label, Overlook Records and it illustrates the real potential that this band has.

One of San Francisco’s finest, Miguel Migs returns this summer with a new single, entitled ‘Everybody’ featuring disco legend, Evelyn ‘Champagne’ King. This release precedes Migs’ eagerly awaited upcoming album ,’ Outside the Skyline’, out later this year on the multi faceted Om Records. According to Migs, “Evelyn King is such a legendary artist, I’ve been a fan of her songs like “Love Come Down” and “I’m in Love” for many years. It was a thrill to learn that she was a fan of my music also and interested in working together on a new song for my upcoming album. She was such a pleasure to work with, so open minded and easy going in the studio.” ‘Everybody‘ evokes a soul-disco appeal with classic and current production values. Evelyn’s beautiful vocal talents soar over a blistering bass-line while textural synth stabs, funky guitar licks and warm melodies create the atmosphere.

Part classic and part futuristic, Informed by house but no slave to metronomic dancefloor rhythms and tempos, it takes influences from soul, reggae, funk, and more, with a heavy emphasis on high-quality songwriting and equally high production values. Migs comments, “I enjoy creating all types of music and I take inspiration from everything around me. Its not about trends or what’s fashionably popular, its about creative expression, quality, emotion and artistic integrity. I love and listen to all styles of music and try to blend the influences together into my songs. Including elements of funk, soul, dub, disco, 80’s sounds and rock… Its ‘electronic dance music’ with soul, musicality and live instrumentation inspired by all kinds of musical genres.”

The single package includes a bunch of remixes of which this is one – and you can have it as a free download from om-records at http://ht.ly/6hLKS