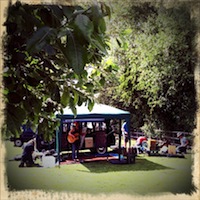 A rum old mix of musical styles this week with some pretty chilled sounds right up against some chunky blues in a feature on Trevor Sewell.

The Norwegian group debuted their first album, Give Us to the Lions, in 2010. Since then they have been hard at work touring and recording a second album, which is due to be released this fall. This track got leaked this way via the good folks at Paper Garden’s Lovely Hearts Club.  Prepare to be mesmerised by singer Turid Solberg’s stunning vocals and the band’s playful, inventive instrumentation.

‘Broken Kingdom’ leans toward the cinematic. It is inspired by and tries to evoke a David Lynch atmosphere. The words and music were conceived separately, years apart by two writers. They eventually found a home.

The track, the final on the album, ends on an ambiguous note, a maybe desperate, maybe affectionate embrace.

Their site isn’t doing much on my computer – how ‘bout yours?

Nice to See You – My First Earthquake (San Francisco)

Another track from San Francisco’s very own My First Earthquake.

A band with a name like My First Earthquake requires an epic creation story. Singer Rebecca Bortman felt her maiden rumble only minutes into the first songwriting session with bandmate Chad Thornton, and the name was thrust upon them. Four years later and the duo is a quartet releasing their fourth recording, now shaking the ground at a more musical frequency.

The band’s second full-length release, Friction, promises to take them to new heights. It was fan-funded through Kickstarter in just 3 days, with the band ultimately hitting 155% of its goal. My First Earthquake reunited with producer (and Mercury Rev bassist) Anthony Molina.

Trevor was featured back on show 242. He joined me from his home studio in Sunderland, UK for a chat and to hear a few more tracks from his new album Calling your Name

Hate me for a reason is a track with a particularly strong lyric. The songs relate to the eternal blues themes of love, helplessness and loss.

Lost Something – a return to the theme of loss.

Trevor has out together a special package of three tracks from the new album, especially for Suffolk ’n’ Cool listeners. You can download a zip file containing the tracks Where the Wild Ones Go,Hate Me for a Reason and Condemned.

Pick up your copy, quite free and legal from:

The new release date for Vanessa Carlton’s upcoming album Rabbits on the Run is now July 26th.  Vanessa will hit the road in June to preview the album nationwide and perform three sold-out shows at Joe’s Pub in New York City (tour dates below).   Carlton will perform on The Tonight Show with Jay Leno in July in support of the album as well.

Rabbits on the Run, Vanessa Carlton’s fourth studio album, was produced by Steve Osborne (U2, B-52’s, KT Tunstall) and was recorded in the UK at Peter Gabriel’s world-renowned Real World Studios. The album returns to a different era of music-making:  ten intimate, evocative songs, recorded directly to tape with her close-knit team of collaborators.

Their debut, “Birth”, released on Liquid Sound in 2008 along with “reBirth” – remixes by Youth, Tripswitch, Kuba, Subsonar and band leader Pete Ardron is regarded by many as a psychedelic chill classic. Its follow-up “Faster” retains all the trademarks of the first but is a significant progression. It still takes the listener to exotic, mysterious places but this time the live element, both instrumentally and vocally, and the personalities of those involved, are altogether more obvious. Living up to its name it is as much a treat to dance to as to listen – a joyful and passionate celebration of life and spirit. Psychedelic world-fusion – Indian, Irish, African, Latin, Middle Eastern, Balkan Gypsy – driven by a mix of DnB, trance, progressive, funk, dub, ska with just the occasional downtempo groove, wrapped in a rich and vibrant orchestral-like production. Atmospheric and visually charged throughout, it’s a seductive piece of work, which grows on you with each listen.

Matt Andersen will be here for a Session at the Barn next week.