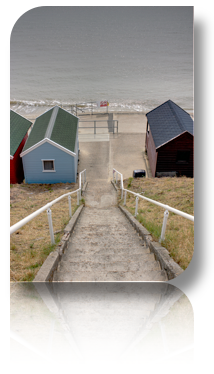 This morning I met up with the person who probably has the dream job at the Adnams brewery, that of the chief beer tester. There to interview Belinda Jennings for the show and find out who has made it as artist of the month.

A fabulous quiet dreamy warm overcast day with waves lapping onto the beach. Where was everyone?

Unquiet Nights are a band with big ideas, big songs, and a big sound. With roots in Belfast and flavoured in London and Rome, the songs are ambitious and direct, whether you hear them live @ 10,000dB or on record.  The music takes you back to a time when song-writing was king and Rock & Roll meant something.

Rising from the ashes of a previous Irish radio fixture, Unquiet Nights are centred on the songs of singer/guitarist Luke Mathers, the drum-work of  Rodger Firmin, and the precision bass of John Rossi.  It had always been about the songs, since long before anyone started taking notice.  And now that they are taking notice, the thing being noticed is still the songs.

“Burning The Tracks” was recently the choice of Recharged DJ Justin Wayne for his track of the week.

2011 so far has seen Unquiet Nights in Dublin (Balcony TV), London (Scala w/ Bloc Party), and headline shows in their hometown of Belfast.

The first full album release is due later in 2011 and anticipation is growing steadily about that which is most essential to the band – the songs.

I Never Wanted You Like I Now Do – Elk Bell (Perth, Western Australia)

Elk Bell is a singer/songwriter from Perth, Western Australia. This track is from her 2011 debut album titled ‘Superfragilistic’.

Elk travelled to Sydney, Australia to record Superfragilistic with Sam Johnson at his home recording studio. It was mastered by the late Shaun O’Callaghan who sadly and unexpectedly suffered a massive heart attack which took his life just months after this project was finished.

You may find her rocking out in pop/rock band Red Delicious however Superfragilistic is very much a folk/pop offering.

Their EP is out now on Propeller Recordings – at least it is in Norway.

Sóley is a member of the indie-collective Seabear. She also studied composition and is a passionate piano player and singer.

In 2010 she released her solo-debut “Theater Island” – a pop record, that sounds like a dream: sweet and weird at the same time.

Having played a couple of Mo Rooneh tracks on the show a long time ago (try shows 186 and 189 – both shows include free IODA download links). It is great to have received a copy of his first fully-fledged album ~ MaCHiNe

True to form he challenges us with industrial sounds.

The pneumatic pulsations from inside the metal casings and the noises that transform into soundscapes form the basis for the majority of tracks on the album.

You can get the album by download only from all the major digital retailers or go to:

Moochie Mac & Superfriends formed in the summer of 2008 after being inspired by a trip to Japan. As fate would have it our heroes, Moochie Mac & Hayashi wrote their first song together—titled Baan Thai—after getting smashed at Thai Beach Bar on Kamakura Beach. On the plane trip back to their native Singapore, the duo decided to form a band and write an album about all of the adventures they had in Tokyo.

Once they returned home, they recruited long time friend K-9 to complete the awesome trio and Moochie Mac & Superfriends was born.

“Fish, Eggs and Sushi,” a song inspired by the supposedly best but surprisingly worst sushi the band ever had in the Tsukiji fish market. “I wanted it to have a tie in with some other factor,” says Hayashi. “I thought of how Hollywood and the news is perceived to be true by a lot of people when they could actually be making crap up. So the song became about that as well.

Our socially and party conscious heroes are making their mark on the music scene from Singapore to Japan with several sold out shows. Fresh off of signing a Japanese distribution deal, MMSF is also planning an extensive tour in the land of the rising sun.

The Artist of the Month was chosen this morning by Belinda Jennings who takes care of the quality assurance of Adnams products.

From a science background she has worked in brewing for some years and is, herself, a brewer. Having worked for one of the larger breweries (that’s larger as in bigger not as in fizzy beer) she joined Adnams six years ago and thoroughly enjoys life in Suffolk.

Her responsibilities include ensuring that Adnams products are safe and consistent and working closely with Fergus (Head Brewer) to check that raw materials are the best they can be.

Belinda’s musical tastes are varied and she is an enthusiastic attender of Latitude Festival at nearby Henham Park.

There is an extended version of the interview in the Artist of the Month section of the SnC site.

From the Celtic rock album Les Illuminés on Jamendo. You can download it free, legal and with enthusiasm direct fromwww.jamendo.com/en/album/8814

The band name may be pronounced “bay zed d ash”

Hook up with the band on Jamendo and let them know how much you’re enjoying the tunes.

The band came to be in the summer of 2010 when Jamie Leffler and Robert Cepeda both went through bummer breakups and spent most weekends driving from LA to San Francisco trying to get away. The six hour drive from LA to the Bay made for lots of down time, especially in Jamie’s radioless El Camino, so Robert would bring along his guitar, iphone and whatever other gadgets they could use to pass the time.

Acoustic Nirvana covers along the grapevine and bad freestyles over hyphy instrumentals eventually led to the two of them writing on the go folk song demos that they’d record to their Iphone. The two had a mutual love for everything from American folk to punk rock, but at the time these songs were far more Johnny Cash than they were Johnny Rotten.

Then in early 2011 Robert the multi instrumentalist / vocalist, and Jamie the lead vocalist took these early demos from Carter Family folk jams to songs that span genres. A mutual friend passed on the demos to LA based producer/dj Skeet Skeet and things began to really get interesting as the songs took on a whole new life.