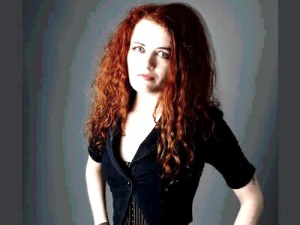 Jordan is a New Zealander living in Hamburg. Her unusual approach to music pairs the rhythms of steam-based technology and machinery with folk instruments and vocal styles, crossing technology with history to tell the dark stories of characters real and imagined.
Jordan’s recent album, How the Dead Live was commissioned by the New Zealand Arts Council, and tells the story of Susannah Hawes, one of New Zealand’s first pioneer women.
In this concept record sharing a dialogue between Susannah and History and exploring the darker areas of New Zealand’s pioneer past, Jordan makes sharp commentary on culture which culminates in History’s annoyance with the lack of gore and grand narrative in Susannah’s story and its choice to forget her by throwing her name into the sea.
As How the Dead Live is a historical piece, Jordan defined the sound of the record with industrial noises that would have existed at the time of Susannah’s life, like hammers and anvils, gold pans, and two-man saws, and visualizes how death is close to pioneers even in the simplest actions of life in a music video for the single “The Proximity of Death.”
There is an interview with Jordan in Suffolk ‘n’ Cool show 226.

Rob has experience in all aspects of the wine trade and declines to admit to how many of his years have been spent at Adnams.
The Adnams wine team really do go to the ends of the earth to ensure a steady supply of excellent wines and Robs role in sourcing the finest is a never ending quest.
Evidence of the quest can be seen by passers by at The Malt Store where stones from vineyards all over the world are laid out on the window-sill.
Take a peek next time you’re passing but don’t distract Rob from his mission … please.

Listen here
Rob describes the characteristics of “fine” wines and his role in sourcing and presenting them to Adnams customers.
During the conversation it tuns out that Rob’s search for outstanding, if slightly quirky wines made by small producers is a remarkably good fit with Suffolk ‘n’ Cool’s own quest to find music that will challenge and excite listeners’ ears.
Rob claims not to know too much about new music but his “tasting notes” approach to describing the music is a revelation and a delight – it also gives away the fact that he has a good ear. The notes also served him well in arriving at his final choice for Adnams Artist of the Month October 2010, Jordan Reyne.
[audio http://traffic.libsyn.com/suffolkandcool/AOTM1010-Rob.mp3|rightbg=84B140]