Based in Cranford, New Jersey, USA, Shayfer James can be described pointedly as a myth in wolf’s clothing. Referred to by his rapidly growing group of followers as The Villain King of New Jersey’s underground noirpop music scene, Mr. James is devilishly captivating and deliciously unusual.

He’s also a thoroughly entertaining and charming man, as I can testify having spent a pleasant afternoon with him and his band in New York. (This had no influence over Ruth’s choice which was entirely independent.) 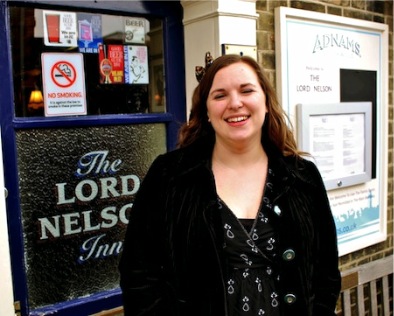 The Artist of the Month for February 2012 is selected for us by account manager and keen musician, Ruth Goldsmith.

If you’ve been thrilled to discover Adnams available on draft in a pub outside of East Anglia, then you may well have Ruth to thank.

Her role is to spread the word about Adnams to the licenced trade way beyond the Suffolk border.
Ruth is a keen folk musician as she describes in the AOTM feature.

Listen here
Hear the extended interview in which Ruth talks about her passionate interest in folk music and dance as well as the local’s name for the Lord Nelson in Southwold, where we met up.