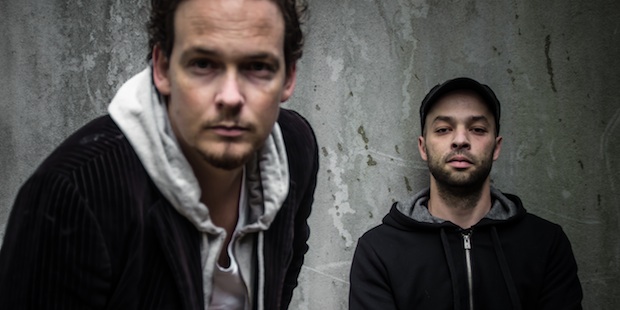 A.S. record in Paris, mix in LA, master in London and get their pics done in Scotland! (Photo: P. Gaston – he’s French)

A fine selection of new independent music that you’ve probably not heard before, selected by a real live human being (that’s me) on the basis that I think each track has something about it that is well worth a listen.

It may not all be just like the music you normally listen to but that’s OK… isn’t it? More on that later.

Should We Beckon On? – Aftertaste (Mumbai, India)

This is another track from the excellent sampler album Stupiddities V which I picked up at The Great Escape.

The band was founded in 2004 and is probably:

Exile is A.S.’s second album. The album was recorded over four months starting in summer 2011 at RedBox Studios in Paris, and mixed by multi-grammy award winning Darrell Thorp at Studio 101 in Los Angeles. The album is a fitting sequel to Intimate Circles, the band’s first opus, but with stronger rhythms and darker, more melancholy texts, as well as greater daring and originality in the complex, eclectic arrangements.

Formed in 2008, the Paris based duo consists of vocalist Nick McRoberts (voice, piano) and Idriss Halfaoui (guitars). For Exile they are joined by Raphaël Mercier (drums) of Mass Hysteria and the haunting vocals of Juwenn of Relay.

The album artwork for Exile was born of the collaboration with French photographer P. Gaston and was shot entirely on location in West Scotland. The album was mastered at legendary Metropolis Studios in London by John Davis (U2, Snow Patrol, Velvet Underground).

Spotify CEO Says Machines Will Pick Our Music In the Future …

Right now, apps like iTunes and Spotify revolve around searching, selecting, and assembling the music we like. Sync’ing playlists and creating virtual collections make sense to us.

But what if machines did all of that work for us?

That’s the future being etched by Spotify CEO Daniel Ek, who argues that the future of music is a lot more hands-free than the present.  And, active collection-building and playlist management could eventually become a thing of the past.

According to a Wall Street Journal profile of Daniel Ek, “he is confident that,

“When we go to live concerts, our smartphones will pick up the set lists and create playlists of previously recorded versions of the songs we’re hearing live,”.

“Mr. Ek thinks that the delivery of music will soon evolve to the point that we will not even have to decide what to listen to — our technology will simply know, depending on where we are.”

Apart from the theme tune for SnC, Grace Valhalla’s music has been played on SnC for longer than almost any other artist and still I love it to bits.

Her releases are all on Jamendo where she’s causing a bit of a stir these days and picking up some deserved praise for her most recent album Spring Souls which was released in March.

TAUK is Matt Jalbert (Guitar), Charlie Dolan (Bass), Alric “A.C.” Carter (Keyboard-Organ), and Isaac Teel (Drums). Forming in middle school, a majority of TAUK’s members have been playing together for over a decade. The group experimented with their sound throughout the years both individually while studying at top music universities and conservatories, and together as a band – always working to find their ideal sound. It wasn’t until 2012 with the addition of drummer, Isaac Teel, and the realization the band could build a fan base around a completely instrumental act, that the pieces fell into place for Homunculus. Jalbert explains, “This band has been through a lot, but we hit a point last year where it just felt like things were coming together the way they were supposed to. We really wanted this new album to be a statement as to what TAUK is all about.”

Gabor Kovacs former presenter of the wonderful Electrical Language podcast popped up on Facebook this week.

GK said, “I bought the Nóra album on the strength of the closing track of the last Icelandic SnC. Fantastic! A strong Doves feel to it.”

I lamented the fact that there was no Electrical Language to listen to..

” I haven’t lost the enthusiasm for listening to SnC :-)”

With his new album Roadtrip Confessions Wes Carr returns to his first love: honest, acoustic music. No flash. No tricks. Nothing but the voice, and the songs. Deeply personal, much of the album was written in the last year as Carr experienced one of the greatest life changes of all. “Most of it was written when I knew my wife was pregnant,” he laughs. “That’s been the secret link: that this new being was coming and joining us forever, and I had no time to waste. I want to say all this to the world before my son grows up and says ‘hey Dad, why didn’t you do all this?’” So it’s somewhat ironic that the most personal, heartfelt material Carr has ever made is coming out under a different name.

The space and openness of the album recall the landscape where Carr grew up: the bare scrubland north of South Australia’s capital, Adelaide.

Old Sydney friends Sam Buckingham and the Falls contribute their talents, but there’s an international element too: ‘Crazy Heart’s is a duet with rising Scots folk star Rachel Sermanni, while ‘My Time Of Dying’ features vocals from Sweden’s all-female roots trio Baskery.

A second track from 360 to follow up on Boys like you that we heard a couple of weeks ago.

Excellent and with a degree of fun. We have a video in the shownotes for this song.

Of course, it’s not gone down well with every YouTube commenter but this is hip-hop which, as a genre, does seem to prompt the most inane, inarticulate and frankly pathetic YouTube comments. That’s not to “dis de musik” which, in this case I think is excellent. It’s just those followers who try so very hard to pretend that they are big angry men.

I suspect (with no evidence at all) that they are mostly 12 year old boys in suburban bedroom who dream of having facial hair.

360 seems to have the good sense to let them get on with it. WIse. The music stands on its own

The Village Voice will kick off their annual free 4Knots Music Festival this Saturday, June 29 from 1-8pm at South Street Seaport, rain or shine.

The sold-out After Party featuring LIL B and special guests Clams Casino and Keyboard Kid will be held at The Music Hall of Williamsburg immediately following the daytime 4Knots Music Festival. Set times for the festival will be announced on the morning of the festival on VillageVoice.com.

From the Stupiditties V sampler album.

Their bio notes are rather refreshing:

Nothing much just a punk band consisting of simple,decent,good for nothing,jobless students makin music as they lack s*xual satisfaction in their life 😛

The only difference is that we guys give what we feel in our music which is quite noticeable in our live acts.

Our songs speak about us and other random topics we can come up with,from our dead brain cells 😀

(we know its one big tag for a band,but we like it that way :P)