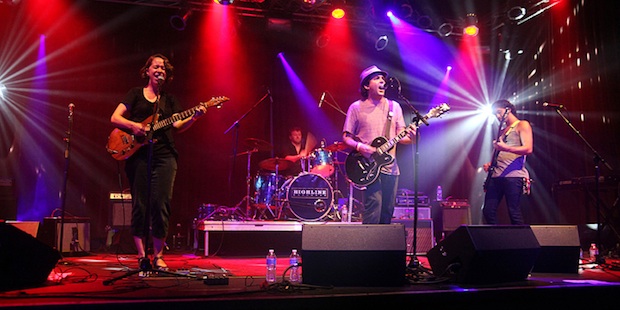 Automatic children close out this week’s show with a deliciously raw, live and real sounding track.

With SXSW in full swing this week I’ve been thinking about setting up an auto-response for all the invitations to party, listen to live music, eat any number of food styles and generally hang out with what will, by this stage of the week be the increasingly strung out great and good of independent music. Much as I’d love to, I’m stuck over here in the UK, but thanks for thinking of me. 🙁

After a decade of cutting a maverick swathe through the industry Bruise have three albums, thousands of gigs, US and European festival appearances, airplay from Japan to the US and a reputation to be proud of. Traveling world wide to deliver stylish and emotive performances this duo are probably Britain’s best kept secret. Supports, collaborations and sessions with artists as varied as great blues/folk songwriter & guitar virtuoso Mark Knopfler, space-rock royalty Hawkwind, country phenomenon Leanne Rhymes, folk hero Dick Gaughan, mean their talents are endorsed by quality.

The intimate venues the duo play are elevated to cult “I was there” status and audiences dance, cry and leave a little altered by the music of Isobel Morris (Guitar and vocals and Jim Kimberley.

Their third album Little Victories and their new single Northern Line are both now available to purchase through all major download stores. They have a mass of small venue shows coming up and all are listed on their site.

Canada has produced some of the world’s most enduring songwriters and Joel Plaskett is hailed as one of the best. With countless awards to his credit, thousands of tour dates, and numerous recording and producing projects under his belt, Plaskett remains one of the most innovative and prolific artists on the scene today.

The year 2012 started in high gear. Out of the doldrums of another long Canadian winter, Joel and The Emergency worked around the clock, sending weekly volleys to fight off the seasonal blues: a brand new song – recorded, mixed, mastered, and released – every single week for ten weeks, accompanied by snippets of video documenting the process in-studio. It was an epic undertaking,which came together in the physical release of his eighth recording, Scrappy Happiness. The album garnered outstanding reviews and Joel Plaskett and The Emergency have been touring steadily since its release.

Scrappy Happiness is the follow-up to Joel’s hugely successful triple record, Three, which garnered overwhelming media response and caught the attention of international audiences. Where Three is a thoughtful solo record that offers up gems that range from pure pop to soul stirring folk, Scrappy Happiness is an epic melodic rock record powered by stellar songs and a sense of urgency.

The band are touring the east US coast as an acoustic duo right now with dates:

Instrumental band, Glorie, was formed in Memphis in the spring of 2009 by former Satyrs frontman, Jason Paxton. The other members of Glorie (Jonathan Kirkscey, Rob Brimhall, Andy Saunders, and Jeff Hulett) come from diverse musical backgrounds and have performed with an impressive array of artists such as Cat Power, Jay Reatard, The Bloodthirsty Lovers, Snowglobe, the Memphis Symphony Orchestra, and Al Green.

The band started as a desire to create substantive, engaging instrumental music with a strong focus on melody. Their music blends acoustic, electric, and electronic sounds and draws inspiration from many genres including rock, classical, and instrumental hip- hop. Glorie’s new EP Falling shows off more of their classical influence than their previous release with the string section taking on a prominent role. Driving rhythms and diverse instrumentation including lush strings, guitar, piano, electric piano, and vibraphone creating a thick wall of sound with a cinematic quality.

Washington DC-based soul rock trio, Mission South, is a band with roots planted firmly in both past and present.  Members Dan Miller (guitar/vocals), John Beck (bass/vocals) and Max Harwood (drums) met in the fourth grade and grew up within walking distance of each other’s homes.

What began as a garage band of three elementary school best friends is now making a powerful impression on the D.C. music scene. Band members Dan Miller (guitar/vocals), John Beck (bass/vocals) and Max Harwood (drums) graduated their respective universities in May 2012 and returned to their hometown with a newly invigorated focus and drive to transform their childhood dream into a professional endeavor.

On the their debut EP, “Migration Vol. 1,” Mission South effortlessly fuses classic blues and folk styles with more modern colors and tones, for a sound that is raw, soulful, and adventurous. You can (probably) get it free via http://music.missionsouth.com

The three-part “Migration” series (“Vol. 2” scheduled for release in April 2013)

Belle Mare are a dreamer’s soundscape. This Brooklyn duo of Amelia Bushell and Thomas Servidone meld beautifully sparse instrumentals and hushed vocals for a enchanting and richly textured sonic experience. Their combination of nostalgic melodic subtleties and modern synth results in a hypnotic and introspective debut with, The Boat of the Fragile Mind EP.

The first single and title track, “The Boat Of The Fragile Mind,” is an extension of Belle Mare’s ability to craft delicate and haunting pop ballads that seep under your skin.

Recorded in the confines of Servidone’s Brooklyn apartment, this eight song offering of melancholiac dream pop and folk imbued with what Brooklyn Vegan calls, a “lovely air of mystery”that’s a twist of old-time chanteuse, adorned with glinted pianos, and spacious textures. The Boat Of The Fragile Mind EP is officially out on April 9th and can be pre-ordered here.

Right off the bat, the spirited on-stage chemistry between Mathias Janmaat and Linda van Leeuwen became something special, emanating the kind of gusto we only see in today’s finest two-way rock outfits. A magical synergy, boosted by Janmaats penchant for writing well-crafted, off the wall pop melodies and Van Leeuwens whimsical energy behind the drums. After starting out as a supposed one-and-done conservatory project, Dutch duo Bombay Show Pig has steadily sculpted their compact and crisp garage blueprint into a vibrant collage of catchy rock tunes.

The result is debut LP Vulture/Provider, recorded at Kytopia – Utrecht’s quintessential candyland for musicians. With producer Simon Akkermans (C-Mon & Kypski) at the helm and Eli Janney (Girls Against Boys, The Rapture) providing mixing duties, Bombay Show Pig finally has a body of work to match their well-earned live reputation. Meanwhile, Mathias and Linda continue to rock fans home and abroad into a stupor, their musical boundaries persistently expanding as we speak.

Automatic Children were called one of the top NYC bands by The Deli Magazine. Twice.

Automatic Children are a rock band, streamlined to the basics, who have taken the best of the best and reflected it back in their own way, creating music for discerning fans who are too old to care about trends  and like their rock lean, fun, and unpretentious.

Rounded out with Ed Vail (bass/backing vocals) and Kevin Letsch (drums) Automatic Children is at heart the combined songwriting efforts of Adam Lippman and Crista Giuliani.

The rawness of the sound is quite endearing. It feels live, it feels real. That’s actually very refreshing.

They’ve been invited to play CMJ for the past three years and I sincerely hope that will continue to CMJ 2013.