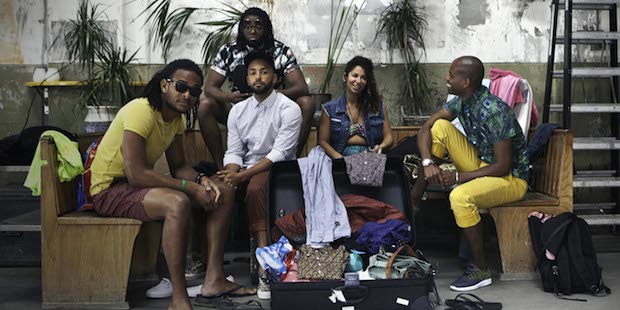 Kuenta i Tambú put a smile on our collective faces this week.

A somewhat exotic show this week with a slight variation of approach. We’ve got five fascinating independent artists from Amsterdam (with their take on the music of Curaçao), Montreal (singing in Spanish), California but with a song in Serbian and, of course, a German Ska band.

Located somewhere near the crossroads of stomp garage rock and blues folk noise. The line-up offers two electric guitars, a bass drum, a hi-hat, and a few touches of “random loop” electro. Dirty Primitives played their first concerts in 2011

Moira Smiley & VOCO have created on their new album, Laughter Out of Tears (released September 15, 2014 on Whim Records), pulling together people from Australia, Europe, and all throughout North America.

Redefining harmony singing with the power & physicality of folksong, the avant-garde fearlessness of Béla Bartók and vaudevillian combo of cello, accordion & banjo.

Working with voices has always been Smiley’s joy.   A virtuosic singer, she works with artists as varied as Paul Hillier, Ladysmith Black Mambazo, KITKA, Tim O’Brien, Solas and tUnE-yArDs, and has sung everything from Stockhausen and Stravinsky to traditional folk music – which remains her deepest love, to the level that she’s spent time as a song collector in the Balkans. She’s recorded Irish sean-nós on her solo record Rua, been featured on radio, television and films, taught at the University of Birmingham in England and several American universities, and been the recipient of an enviable list of grants and awards.

In 2006 Smiley formed VOCO, a five-piece group of singers and players, with an improvisational – and uniquely vocal – approach to American and Eastern European folk music, and Smiley’s polyphonic originals.

“The band is made up of spare ingredients,” she says. “There’s usually cello, always body percussion, and everyone sings, of course. I write for three or four voices in harmony, and I play banjo and accordion.”

Laughter Out of Tears continues a journey Smiley has begun with VOCO’s three previous releases.

A second track from Moira Smiley.

Alejandra Ribera has a small tattoo inside each wrist. On the right, in Spanish, is the word ‘Listen’: on the left, ‘Remember.’ They’re not for display, but reminders to herself, watchwords for living and art. And she does both without compromise on her long-awaited second album, La boca (release: June 10, 2014 on Pheremone Recordings), a disc that brings together all the separate strands of her life and creativity.

“My first album (Navigator, Navigather) came out in 2009, and people said I was crazy to wait to record the second,” she explains. “But I knew I wanted to work with producer Jean Massicotte (Lhasa de Sela, Patrick Watson). He was booked, so I waited for three years until he was available. And I was right; he was the person to find my thread, no matter whether I was singing in English, French or Spanish.”

In part, her approach to words comes from the fact that Spanish was her first language. Her father hails from Argentina, and the family spent a year there when Ribera was very young. Finally, when they returned to Canada, she announced that she was just going to speak English.

“But the sound of Spanish still feels very familiar,” she says. “It’s like something just out of reach, beyond a veil. So much of my writing is like a conversation with myself that’s very open-ended. And going outside my comfort zone, especially traveling where you don’t speak the language, stimulates me.”

But the Canadian-born singer-songwriter has always followed her convictions, no matter where they’ve taken her: to Glasgow when she was 19, to see her mother’s Scottish homeland, living in Paris and Malaga, or moving to Québec to work with Massicotte.

A second track from Alejandra Ribera which features on her album, a richly textured, multilingual album that reflects the artist’s roots as much as the journey she took to bring it to fruition. The artist, who cites amongst her greatest influences Rufus Wainwright, Chavela Vargas, and bagpipes, now divides her time between Montreal, Paris and Malaga where she continues to create..

When Roël Calister, a Curaçao-born percussionist who moved to the Netherlands, began his career, it was with the traditional music of his homeland, everything he’d learned as he grew up. The band he founded in 2005, Kuenta i Tambú, played and sang acoustically. It even infused the material he composed. But in 2010 a sea change happened, following a change in band membership.

“Like a lot of people, we were listening to hip-hop, to dance music,” Calister recalls. “We started experimenting with beats and electronics to give our music the feel that fascinated us in European electronic music, music we really loved. We released an EP and the style we call Tambutronic was born.”

Since then Kuenta i Tambú have evolved and refined their music. They’ve introduced Tambutronic music to several continents, including prestigious gigs at Kennedy Center and Lincoln Center, and added a new singer, Diamanta, to make them into a five-piece. And, Calister says, “We knew it was time to make a proper album.”

For all its contemporary sound, though, the music of KiT is very solidly based in tradition.

Our second track from KIT

Here’s the About video:

“No Ska Today” continues with the philosphy of Skabrot’s previous release “Neotanzmusik” from 2012: music is diverse, colorful and true to life. The inspiration for this work comes from the expectations of society towards young people: Exciting, but back-breaking. Therefore the journey crosses Ska, Indie-Rock, Punk, Reggae, bliss and doubts.

… and here’s their “about” video