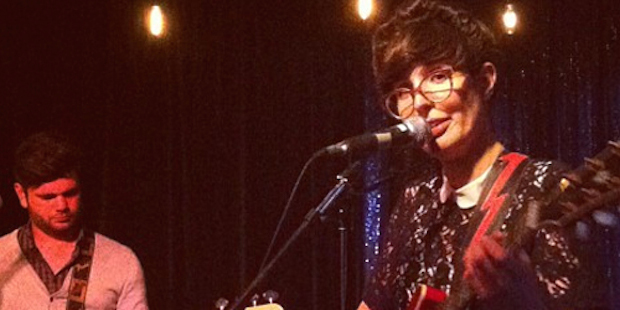 Gianna Lauren takes time out to talk with Peter about her music and life in Nova Scotia.

Its a while since we devoted the entire show to just one artist. It’s something that I really like us to do because it gives a chance to dig a bit deeper into the music and background of some hugely talented independent artists – the very people who have the depth to make such exploration so thoroughly worthwhile

Its a while since we devoted the entire show to just one artist. It’s something that I really like us to do because it gives a chance to dig a bit deeper into the music and background of some hugely talented independent artists – the very people who have the depth to make such exploration so thoroughly worthwhile.

This week we focus on Guianna Lauren whose almost wistful music was showcased at The Great Escape. It’s a while since we recorded our conversation, just before I went down with what I’m increasing convinced was Great Escape plague!

We found a corner of the green room at The Blind Tiger, one of my favourite Brighton venues and I started by asking Gianna how the practicalities of music works for independents in Canada.

Originally haling from Ontario in Canada, Gianna Lauren released her EP ‘On Personhood’ via Forward Music Group on 5th May 2014.

In this set you’ll have heard all six tracks from her excellent “On Personhood” album. If you’ve liked them even just a bit, please bear in mind that an mp3 podcast is fine to give you a flavour of the music but I’d seriously recommend shelling out the princely sum of just $5 to get the album in your choice of high quality format and listening to it full, glorious colour.

The very good news for UK listeners is that only four months after her first European tour, Gianna Lauren will be returning to England  in September.

She’ll be playing four shows in England, including a performance at London’s Hoxton Square Bar opening for Sweden’s Jennie Abrahamson. Showcases at The Great Escape festival in Brighton back in May introduced Gianna’s music to English audiences through the UK release of her On Personhood EP. She is currently mixing a new full-length that will be available in 2015.

GIANNA LAUREN – Anchor Down from Southern Souls on Vimeo