We’re meeting Tangled Eye at the crossroads this week, in fact we’re calling at a whole series of crossroads.

An interesting blend of blues and electro-swing, jazz and rock with a special guest and another guest joining us to mark to fact that two of your favourite music podcasts are each 8 years old this week.

The theme of the show could be based around the first track which was born at a particularly interesting crossroads where Balkan brass music met up with Gypsy Jazz. 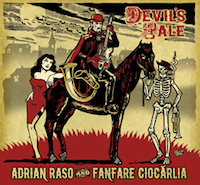 Legend has it that the Devil likes to frequent crossroads, cutting deals for souls and spinning his cunning yarns. Yet not all crossroad pacts are diabolical; some are just damned brilliant.

Take the crossroads encounter behind Devil’s Tale, where the eastern force field of Balkan brass meets Gypsy Jazz guitar, as Romania’s Fanfare Ciocarlia joins up with Canadian guitarist Adrian Raso. Fanfare Ciocarlia are a 24-legged brass beast whose eastern funk groove has torn up halls and festivals across the planet. Raso is a master guitarist, deeply versed in the French Manouche / Gypsy Jazz stylings of Django Reinhardt. Could a string musician find a way into Fanfare’s fierce Balkan brass blast? Could the legends of brass adapt their horns to the fluid eloquence of a jazz guitarist? The answer, as heard on this album, is one of brilliant defiance.

Adrian Raso has dreamt of this project for years. The gifted guitarist possesses a vast musical vocabulary rooted in Gypsy Jazz yet, in his fleet fingers, capable of referencing metal, Latin, funk and his family’s Italian tarantella roots. Raso built his virtuoso reputation playing Toronto’s toughest clubs as a teenager. More than two decades later he remains on a musical quest that demands he challenge himself. The quest lead to him reaching out to Fanfare Ciocarlia – the Romany Gypsy orchestra from the “invisible” village of Zece Prajini in north eastern Romania – who blast a fierce, very individual brand of Balkan brass. Both Raso and Fanfare share a love of Django and big band jazz but initial concerns surrounded whether their very different backgrounds would allow for a common musical dialogue to ensure.

“Meeting the band was a great experience,” says Raso. “We bonded instantly. We joked about being separated brothers as it really did feel like that. Musically we understood each other from the get go.” 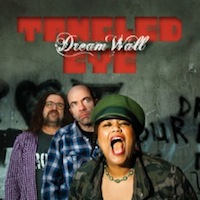 TANGLED EYE is a unique line-up performing original songs. Raw and simple with a deep love for American Roots Music. These musicians have broad taste and an open mind, so a lot of musical influences come through. Despite the short existence of this trio (early 2013), they have already played in Holland, Belgium, Germany, Denmark, France, and Austria. The band comprises one stranded American from Dallas TX and two flying Dutchmen.

The band is NEW. The songs are ORIGINAL. All three of them have LEFT our COMFORT ZONE. Jasper is playing drums instead of bass. Jan is combining bass and guitar in one instrument. Dede is adding violin to her singing. They wrote all of these songs in early 2013. During the last six months, they have had the opportunity to fine-tune the arrangements while playing all over Europe.

These recordings are simple and direct, just as they sound live on stage. You can order hard copies of the record via the Black & Tan webshop: https://www.crossroads.nl/cgi-bin/blackandtan-shop/blackandtan-shop.cgi 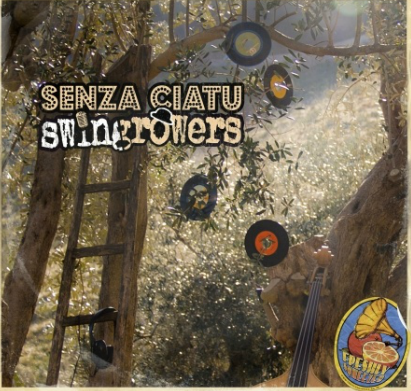 From Palermo, Sicily, Codger saw this lot perform at Concorde2 in Brighton last week. Supporting the ever awesome Chinese Man, their electroswing perfecly complemented their turtablism, hip-hop and dubsteppy performance.

They’re currently a trio with singer, Loredana Grimaudo, “Hot Club de Paris” style guitarist, Alessio Costagliola, and DJ/All-rounder, Roberto Costa. The DJ was particularly amazing, with some scat singing (that sounded like a trombone) and some clever piano licks played on one of those drum pads DJs use. Very inventive. 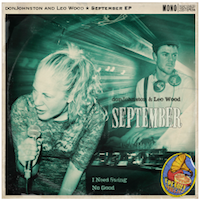 Another track from the same, Brighton based, label: Freshly Squeezed. Codger played tracks from this label years ago, when IODA Promonet was still around. Specifically the Voodoo Trombone Quartet! Codger has started a dialogue with Nick from the label, so more tracks will appear.

Although the tracks is “I Need Swing“, they have definitely got the blues, and the dubstep infused blues to boot!

Brooklyn-based Canon Logic’s second full-length album, WYLD, sees the band shrugging off the closeness of the city they’ve called home since 2010’s FM Arcade and tapping into a spirit of adventure and freedom with their first self-produced and recorded effort. Recorded in studios (Maverick, Rubber Tracks), lofts, and bedrooms from Manhattan to rural Pennsylvania, the songs themselves were conceived in a place of rhythm and heart, far from any city and immune to the march of time. That spirit is evoked by soaring guitars, galloping bass lines, and the passionate abandon in Tim Kiely’s vocals.

Escaping the confines of the city grind, and self-producing the album enabled the band to involve friends like Nick Stephan of GIVERS on saxophone, Marques Tolliver on violin, and Grammy Award-winning Fernando Lodeiro assisting with mixing and additional production. WYLD is a celebration of this collaboration and freedom.

Well, there’s a first. The Sounds Australia team will be setting up shop, stage and grill then chopping onions and cooking up the infamous Aussie BBQ at MIDEM, one of the music industry’s most prestigious conferences of the year.

This is the first time the Aussie BBQ has hit uber-sophisticated Cannes on the French Riviera. I note they’re referring to it as “BBQ cuisine” – very continental. I hope they’re ready!

Framlingham’s own Modest Ike (www.modestike.com) and Polly Gibbons (www.pollygibbons.com), returning to their home town from London for a rare concert reunion.

Polly Gibbons and Ike Robinson played in bands together at Thomas Mills High School (Class of 2000) and are looking forward to collaborating, as well as performing separate sets with their own bands.

Ike brings top-notch musicians Benedict Green and Tim Nugent to his own ‘modest’ brand of English pop (shades of Kinks and Beatles with a definite 21st century twist), and Polly will be singing her soulful jazzy numbers accompanied by Ronnie Scott’s Artistic Director James Pearson on piano.  Not to be missed.

Any profits will be donated to local youth charity FAYAP. 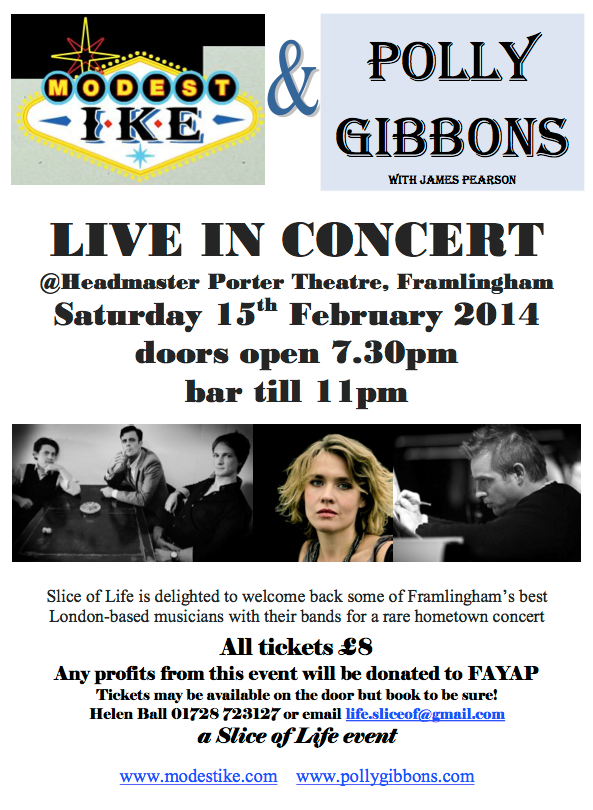 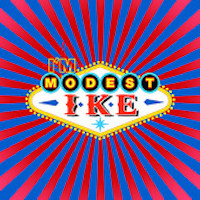 In 2010, guitar-playing singer Ike Robinson went on a recruitment drive with a trio in mind, scouring London for a bass player and a drummer.

Writing began on a debut album in January 2011 in a Bethnal Green rehearsal studio and in November of the same year, the group – operating under the steeped-in-irony banner of ‘Modest Ike’ – recorded 15 songs in six days at Fish Factory studio in Neasden with producer Benedic Lamdin. Four days’ mixing later, the album was mastered by Lewis Hopkin of Stardelta.

The LP, entitled ‘I’m Modest Ike’, is available now in the iTunes store. There’s a link on the Modest Ike home page.