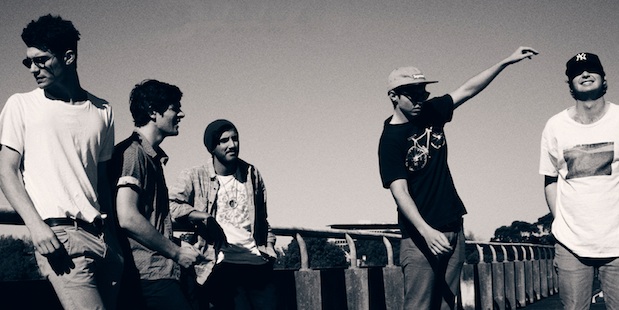 Louis London grace the show with their “sprawling yet intimate” music this week.

And with a single bound – well after three days without power or web last week – we’re back.

Nothing’s changed, just the same old quirky collection of new and interesting music to make up your blast of fresh musical air from a still drafty barn on the east coast of England.

the blast this week comes from Germany, New Zealand, Canada, Texas, Australia, Ohio and either New Jersey, Tennessee, Vermont, Indiana or Arizona (there’s a tale attached to that).

A Germany-based band although they are of Serbo-Croatian and French origin whose music brings together elements of traditional Irish folk, Jamaican reggae and a touch of the Orient.

You’ll find their album Mondovojaĝo on Jamanedo but it appears that they are no longer operating and their site is gone.

Acclaimed New Zealand-born singer, songwriter and guitar player Ted Brown had a promising career fronting his own band before he became firmly entrenched in a drug habit that sidelined him for 7 years. Though he’s now been sober for over a decade, the modest and private musician has kept his powerful story to himself. With his second album, An Unwide Road, he shares his journey with an elegantly spare and tenderly introspective record.

An Unwide Road is a confessional album looking back at a tumultuous past from a centered present. The pastoral folk of the standout “Love Is” looks at the void we all feel inside and try to fill with drugs, drinking, shopping, and other empty pursuits. This is the album’s first single.

Brown recorded the album at Roundhead studios in Auckland, New Zealand with producer Wayne Bell. The refined simplicity of the production aesthetic aptly reflects the intimacy and authenticity of this body of work. It was tracked studio live with minimal overdubs and artfully placed mics to vibrantly capture Brown’s stirring studio performances. Although the core is Brown singing and playing guitar, each track is delicately embellished with contributions from some old friends.

Prodigious and prolific emcee James Sobers, known professionally as BluRum13, has had an iconic career as a solo artist and a collaborative artist. He’s released two solo albums.

BluRum13/James Sobers was born in New York, but grew up in Maryland where he established his distinct aesthetic, a mélange of acrobatic rhymes, poetic profundities, and silken, sensually sung melodies. His texts are empowering and enlightening, encompassing physics, metaphysics, astronomy, astrology, existentialism, social commentary, and uplifting introspection.

A delight to have another Jitterbug Vipers track on the show. Even better, they’re coming to Europe later this month and I’m planning to catch up with them in London on 28th. Join me (and them) at the Green Note in London’s  Camden. More dates on their site.

Bassist Francie Meaux Jeaux didn’t start playing bass until she met Slim, her husband of 25 years. “The day after Slim and I got married, I did a hit of acid and he put a big ugly ass bass in my hands. I started plunking around and was hooked immediately. He taught me basic music runs, he named them ‘George,’ ‘Fred, and ‘Charles.’ He’d say play two ‘George,’ one ‘Fred,’ and then ‘Charles’ twice,” she recalls, laughing heartily. Francie is also known for playing with her back to the audience, snuggled close to her acoustic bass, enveloped in a sonic stratosphere of groove. It’s a stage visage drummer Masumi Jones has called “Ass To The People.” That motto has become a rallying cry for the group and a popular bumper sticker around Austin.

Described as “Sprawling yet intimate” the five young Aussies of Louis London have released this, second single from their debut EP On Your Lips We Roared.

For the recording of   , the band headed into the studio for the first time, and literally took over. “We recorded with a really talented young producer Tom Ugly in Sydney,” recalls the band. “Being a first recording together, everyone was pretty keen to get it to sound exactly how we thought it should. I’m not sure if we got there because we spent so bloody long doing it but it seems we have had a pretty good response so far so I guess that’s what matters!”

Vivian & Midge Ramone are indie pop duo, ShiSho. The teen sisters have been performing for 9 years with a punk aesthetic that catches audiences off-guard.

We heard from them a few weeks ago but this stuff is just so good it has to be out there.

Their EP The Sisters is available through their Bandcamp page.

It’s been a year or so since we heard from Anitek, and now three tracks come along at once. A medley of tracks off his very new album released last week called Sights & Sounds

I know virtually nothing about Anitek except that his base is Morristown, USA – although according to Google Maps that could be in New Jersey, Tennessee, Vermont, Indiana or Arizona.

He has loads of music on Jamendo though.