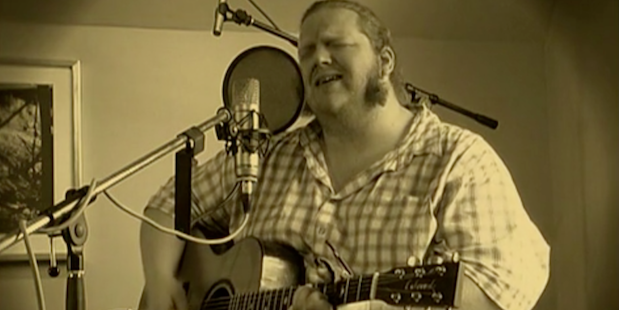 Matt Andersen played an astounding Session at the Barn a couple of years ago.

A change from the planned edition this week, because we had a bit of a storm go through Suffolk on Monday morning which knocked out much of the electrical supply and phone lines, particularly outside the main towns and villages. Unfortunately we are in what the electricity company considered to be an “isolated rural location”. So the restoration of our supply is apparently considered less of a priority.
So, this week a mercifully short introduction from me recorded into a laptop and a second chance to hear a fabulous Session at the Barn from the super-talented Matt Andersen which was recorded a couple of years ago. His music continues to delight audiences around the world and his links remain the same as those mentioned on the show.
Enjoy the music and chat and then and I’ll hope to be back to normal next week.

Based in Cape Breton, Canada, Matt Andersen (here at the barn with Peter) has a larger than life showmanship that has been earning him a fervent and steadfast audience wherever he graces the stage. Matt’s sprawling blues, roots and rock musical hybrid with his sorrowing and soulful voice and astonishing guitar-playing has sparked a phenomenal buzz on Canada’s East Coast.

He called by at The Barn on a Sunday morning and played a remarkable session. I swear that the skill in his guitar playing and passionate power of his superb voice is still reverberating around the building. My thanks to Matt for visiting and to Jeremy Gugenheim for the recording set-up. Such is the power of Matt’s voice that even when he threw his head back away from the vocal mic to sing particularly loud passages into the roof, he was peaking the guitar mic! Hmm. Get out of that one JG!

Thanks are due to Daryl and Buzz, listeners in Manitoba for putting me onto Matt in the first place – truly appreciated guys.

For more info on Matt and his music catalogue go to:

Here’s a video of one of the songs that Matt played in the session. Yes, he was sitting in the tidy corner!