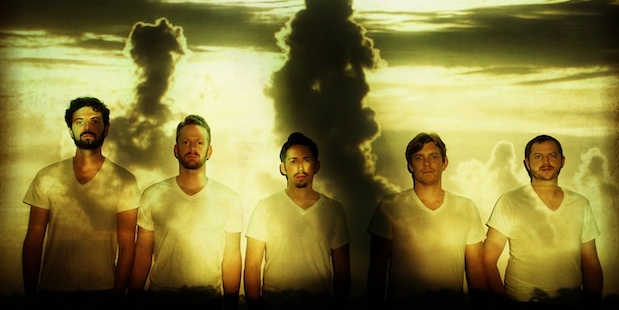 Wires in the Walls bring a cinematic element to the show.

We go a bit dreamy in parts this week. With some gorgeous sounds pulled together into fabulous music from around the world, including Brighton, Berlin, Brooklyn and Brisbane, as well as Michigan and LA.

We’ve now booked our tickets for The Great Escape, which, before we know it will be creeping up on us … at least I hope it does.

Warren Sroka grew up in New York City, the birthplace of the underground punk and new wave scenes, but his musical centre has always been the often quiet, introspective work of storytellers like Gram Parsons and Neil Young. While pursuing a career in film, Sroka began writing the material that laid the groundwork for his musical identity and for Wires in the Walls’ post-Americana sound. In these early compositions Sroka drew from his experience as a film-maker and screenwriter to tell compelling, emotionally driven stories with stripped down, classic acoustic arrangements and lyrical themes reminiscent of the folk music that had been his life-long love. Songs such as “Big Bad Love,” “Twin Jet Engines,” and “Eulogy” trace these folk roots from Wires in the Walls’ first recordings through their most recent.

Their most recent EP, Leap, Timber, Leap is a four track epic in so much as every track has epic qualities that verge on the cinematic. You can get it in great quality from their Bandcamp page (linked from their home page) for a minimum of just $4.

Acoustic/Ambient band based in Brighton and Bath. Written and Recorded by Kips Golden

Note from the Artist:

Hi, I heard Peter Clitheroe play a song of mine on an amped show podcast. He said he liked one of my influences Nick Drake. My previous EP was slightly more Nick Drake’ish so I thought I would send you a song from it. (name is pronounced like ‘Goodjaw’). Muchos thanks, Kips

This track is from the debut EP ‘Memories of Once Known‘ which you can download free at the Bandcamp page.

The new seven track collection, released 18 August 2013, is called “In Tandem” and priced at whatever you’d like to pay for it.

Written and Recorded by Kips Golden.

Here’s a video recorded at the Fountain Head in Brighton with much less reverb and thus a more immediate and intimate feel. Which version do you prefer?

KILN expands upon its aural concepts of fluid, neverwhere textures with meadow:watt, its third full-length with Ghostly International which is due November 12th. Building upon the sound they developed over 10 years ago with Sunbox, then expounded upon in 2007 with Dusker, the evocative spaces of meadow:watt bring the sonic art  into even sharper focus.

The creative process of KILN is intuitive and synergistic; sounds may be sourced from guitars, drums, keys and field sampling, but their ability to filter up to 250 channels of discrete audio through a vintage Neve 8068 console and amalgamate the final product is the masterstroke. An analog array of outboard gear accentuates the organic warmth and low end of meadow:watt. The new album will  be released ion the always-interesting Ghostly International label on November 11.

Sonic Ahmed works straight out of his heart. As well as his solo work, he performs in bands including “A Glezele Vayn” (www.glezele.de). Recently he’s been playing more clarinet than anything else and dedicating himself to klezmer and balkan music.

The current album “Balkanbrääz” is a collection of ideas from the last 3 years, brought into songs that transport the feeling of eastern European music.

Yes, of course it’s on Jamendo

At a mere 23 years old, Detroit native Grant Kwiecinski (aka GRiZ) is an amalgam of talents that go beyond a simple description. A producer, DJ, and classically-trained saxophone player, GRiZ is bending and re-shaping electronic music with his funky, sax-infused sounds that find heart and soul within the beat of the dancefloor. In celebration of his sophomore album Rebel Era due out this month, GRiZ just unleashed the album lead single and accompanying video,  “Hard Times”

I’ve played a couple of tracks featuring Griz recently and have been struggling to adequately explain his live show.

Grünemusik is the name of a unit owned by hikaru (nankado). He’s been publishing some experimental-pop tunes since around 2000 in Japan.

I heard another track by the same artist on PC Podcast  448 and checked them out on Jamendo – you can, and should, do the same.

The Oyster Murders’ name often raises curious looks from those hearing it for the first time, until they realize it derives from Lewis Carroll’s classic novella Through the Looking Glass. The band enjoys this esoteric approach to popular culture, sometimes weaving subtle references into their lyrics. The backdrop for this lyrical collage is a 90’s inspired sound punctuated by dreamy pop moments, reverbed guitars, inventive synths and, at times, densely layered instrumentation. After a busy 2012 with live performances in New York and the release of their debut album, The Oyster Murders have just finished recording a new EP, Mourning Birds.

The group have for some time now been recording and releasing their own unique style of alternative independent music. The majority of the band grew up in small towns and later met when they all moved to the city of Brisbane, Australia.

Founding member Grant Redgen (vocals, guitar) recalls his frustrations of growing up in a rural isolated town, where trying to get radio reception was difficult enough let alone actually seeing a band play live. After moving to Brisbane with aspirations of putting together a band he met Wendy (vocals, synth) who was also largely a self-taught musician. The two bonded over their shared passion, got married and started making music together. This organic formation of a band continued with good friends Shaun Edwards (drums), and Chris Macpherson (bass) joining the line-up.

The band have already played CMJ and will be returning to NYC early in 2014 to promote the Mourning Birds album and start work on the next.

Brooklyn’s finest purveyors of tasteful tribal pop, MANICANPARTY, drop their highly anticipated debut EP TODAY! Advance singles “Rebels In The Light” and “Monarch” laid their schtick pretty bare: intoxicating rhythms, yelps straight out of Hounds of Love, and hooks much more viscerally pleasing and chart-courting than anything Ms. Bush ever committed to tape.  Sure looks good on paper, and turns out it sounds damn good, too.

Friends since their high school days in Minnesota, Jessica Corazza and Patrick Morrissey of MANICANPARTY make expressive, uplifting tribal pop at the perfect midpoint between Top 40 and unrestrained self-expression. While they draw on the same aural palette as many electro-pop artists today, their classic sense of songcraft, soaring vocals, and infectious jungle rhythms set them apart.

They have a show coming up at Rockwood Music Hall, NYC on October 30 and the entire EP was released last night and is available to download free right now from their site.