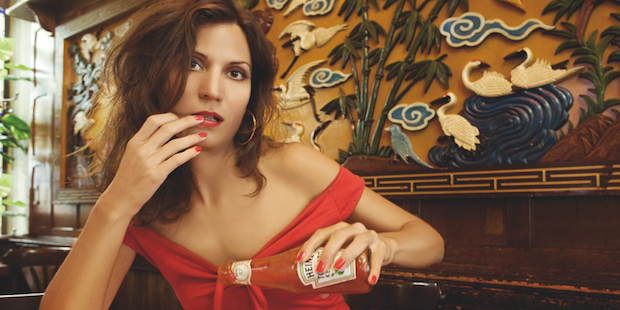 Zoe Leela is based in Berlin and her music captures that uber-cool city’s creative heartbeat.

The accordion and bandoneon make welcome appearances on at least two tracks this week as we sample the musical delights of Kansas City, Chicago, Germany, Tokyo, The Netherlands, Ohio and Toronto. We’ve also got a few hot tips for CMJ which is in full swing in New York until Saturday.

The new album, Country Singles, started as an inside joke among the band members about a rural newsletter for lonely Middle Americans. The double meaning points to the band’s sense of humor, but this album is more than a collection of twangy hoedowns. Rather, it covers a wide breadth of dynamics and emotions, and speaks as a testament to the band’s grasp of American music, both traditional and modern. Nods to classic soul music, folk, punk rock and barrelhouse blues can be found here, wrapped within soulful harmonies, crisp musicianship and clever lyrical depth.

ZOE.LEELA’s first full length album DIGITAL GUILT celebrates the digital age, yet simultaneously raises a questions about it, as is clear from the title. Do we have the present day information overload that we all face under control, or does it control us? Is the rift between reality and the digital society placing us in a position of moral responsibility, challenging us with a fight against an unremitting world that forgives and forgets nothing? “Actions are visible,” a line from ZOE.LEELA’s song Come On, addresses this dilemma.

As a whole, the album is more mature, elaborate, and presents itself in a new complexity. Pounding Drum & Bass meets drifting grooves, elements of jazz, dub, intoxicating melodies. Embellished by ZOE.LEELA’s personal and poignant voice, the music rouses a physical reaction. Her experimentation with various musical styles becomes evident; from swing to hip hop and jazz, the artist remains poised and certainly delivers. “I like to play with identities and am not trying to offer the presentation of something calculable or predictable.“

This is how an idiosyncratic mix of songs like Pop-Up, a brilliantly simple pop piece, or Violet, with it’s enrapturing sexiness, slowly unfolds and gives the album depth and originality. She Rides, Homicide and Jewell offer a mix of brutality, abrasiveness, charm and imaginativeness.

The album is available on Jamendo and at higher audio quality elsewhere. www.jamendo.com/en/artist/377055/zoe.leela

Here’s her EPK. Also some more innovative videos on her site.

The Ancient Drum – Kellen and Me (Chicago, IL, USA)

KEIIEN AND ME plays an electro loop, introspectrum rock n’ glow that invokes the spirits of both future and past. KEIIEN AND ME is a lo-fi musical experience; with high-fi, philharmonic results. The self-titled debut LP blends a multitude of elements with indie rock instrumentation and quirk, lush with evocative lyrics against a backdrop of folksy fingerpicking and textures. KEIIEN AND ME is in the final stages of pressing copies of the follow-up LP titled “In Gold Sunshine’

It’s available on Jamendo or at better quality on the Bandcamp page which is also his website.

Don’t ever leave myself I – Dee C’rell (London, UK)

Dee C’rell was born in Hackney and grew up in Shoreditch, Central London.

Considered as one of the most exciting musicians within electronic jazz based music by a vast array of the most significant DJ’s in the world, Dee C’rell’s music is increasingly influential worldwide. His music readily appears on a variety of record labels and radio stations within electronic and acoustic music, and his name is synonymous within music genres; such as, down-tempo, lounge and nu-jazz. He currently owns the contemporary record label, Holm Records, which also releases many of Dee C’rell’s compositions and his collaborations with various artists.

You’ll find another track on SnC 377 back in June. Check him out as radio presenter on Samurai.fm samurai.fm/deecrell

The Balconies are playing three showcase sets this week. Today they’re at The Rock Shop in Brooklyn, tomorrow at Vibe Lounge at Rockville Centre and on Thursday at Legion Bar details at www.thebalconies.ca

I caught sight of Toy Soldiers this week and they look to have an excellent live show – lots of guitars and swagger. They are playing at midnight tonight at the Outlaw Roadshow Showcase at Bowery Electric and on Friday at their Official CMJ showcase at Alphabet Lounge. Miss them there and the Philadelphia-based band have quite a few dates along the eastern seaboard in coming weeks.

Another Canadian artist not to miss tonight is Ben Caplan who is playing the Canadian Blast show at Arlene’s Grocery on Stanton Street in the LES On stage at 6:30 bencaplan.ca

Sadly we’ve already missed (or enjoyed) the Paper Garden Records showcase yesterday at The Living Room. City and Horses were among the excellent artists playing there.

Deli Mag are promoting three shows on Tuesday at the Delancy, Wednesday at the wonderful Rockwood Music Hall, on Thursday at Spike Hill and finally, on Friday evening at Pianos, right after the Planetary/Great Escape party at Pianos, Ludlow Street, LES, NYC.

Of course there’s a load more than that – if you’re there you probably have your week planned yeah? Ha! If not you could make a virtual plan here: http://www.cmj.com/schedule/

It’s quite a task though with over 1,400 live performances in more than 80 of New York’s finest clubs, bars and theatres for an audience in excess of 120,000, plus a full daytime schedule of panels featuring some of the finest brains in the music business.

In case, like me, you can’t be there this year, help yourself to a free CMJ mixtape here

The sixth album by Netherlands-based cajunband Cochon Bleu is a varied and intense affair. Varied as in funny, focused, sad, mad, romantic, down to earth. It’s all of those things, in an intense way. The recent reduction from fivesome to quartet has made the sound leaner.

Musically, the influences have broadened from Cajun and Folk to Americana, Latin, Dutch children’s songs, some slight Jamaican touches even. Sonically, the album is kept together by the wonderful recording and mixing of producer Herman Grimme.

Vivian & Midge Ramone are indie pop duo, ShiSho. The teen sisters have been performing for 9 years with a punk aesthetic that catches audiences off-guard. The girls perform intelligent and quirky folk-punk on accordion, guitar and occasionally the ukulele.

When the Japanese Power Delight Music Fest 2012 took place in October 2012, OTONANA TRIO found such a positive support from the South East U.S. That they started thinking…”Maybe we can built something from here….”

By December 2012, OTONANA TRIO started to circuit around High School campuses in California.

The enthusiastic reaction from CA led to another U.S tour in Feb/March 2013. Mainly around Texas, withj the help of the Dead Foxx Family.

Now they’re out on the road again for a solid six weeks touring their new power bases in both the south and California.

“OK, in case you hadn’t got this from the album title, this is a fun album. This is big bouncy pop tunes, Scissor Sisters style lyrics and thumping beats that make your ear drums dance. But there is thought and care behind the fun, this isn’t just throw away stuff.” – Listen with Monger

They’re playing a CMJ showcase tomorrow at Left Field, on stage at 11:30