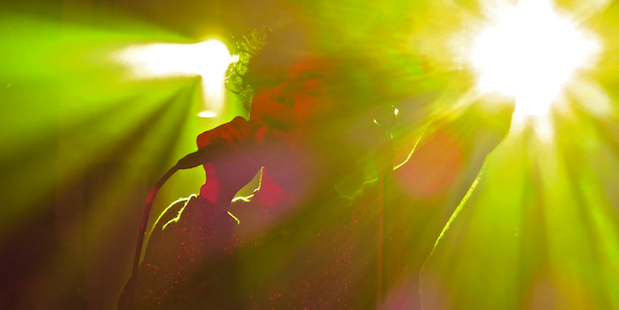 Ingrid Chavez features this week with a glorious (and frankly rather sexy) Black Eskimo track.

Another quirky selection to challenge and delight.

A challenge for me too because I didn’t think I liked “Hip Hop, Indie Pop, Electronica, and Ambient” music fused into a soulful funk but I just love a track coming up from Black Eskimo. We’ve got a couple of reggae tracks too, one from Ireland and the other from Japan. No ordinary reggae then. Confusion may well reign when I try to differentiate the details in tracks from Gramatik and Grizmatic.

This is the 2nd single off the forthcoming album “The Age Of Reason” Gramatik says,

“I’d love to be able to explain to you guys what I tried to do here and how much this tune means to me musically but I would just mess everything up with dumb words, so I’m just gonna let you absorb this one with a clear mind. 😉

PS: I recommend a Cuban Cigar & an Old-Fashioned while listening to this.

Also, guitarist on this one is my youngest celestial brotha Don Dero from Exmag.”

While we wait for The Age Of Reason album release, Gramatik gives away 22 tracks, including a free mix tape to hold us over. “Street Bangerz 4” is a compilation of leftover tracks from SB1 featuring Gramatik’s classic sound back when he was known for producing simple and raw, sample-based hip-hop beats. Stream or download SB4 – HERE.

With his most recent album Roadtrip Confessions Wes Carr returns to his first love: honest, acoustic music. No flash. No tricks. Nothing but the voice, and the songs. Deeply personal, much of the album was written in the last year as Carr experienced one of the greatest life changes of all. “Most of it was written when I knew my wife was pregnant,” he laughs. “That’s been the secret link: that this new being was coming and joining us forever, and I had no time to waste. I want to say all this to the world before my son grows up and says ‘hey Dad, why didn’t you do all this?’” So it’s somewhat ironic that the most personal, heartfelt material Carr has ever made is coming out under a different name. With Roadtrip Confessions it’s goodbye Wes Carr, hello Buffalo Tales.

Roadtrip Confessions was recorded simply: guitar, voice, and trusted friends old and new. “Making it was just me and my best mate Stu Hunter: we just sat in his studio and went ‘this is what I want to say’. And whenever I started to overthink it, he’d go ‘hey!’ and pull me back into line, which is what you want in a producer. Some of the songs are live and they’re all very easy to perform, because they’re the truth, really.”

Old Sydney friends Sam Buckingham and the Falls contribute their talents, but there’s an international element too: ‘Crazy Heart’s is a duet with rising Scots folk star Rachel Sermanni, while ‘My Time Of Dying’ features vocals from Sweden’s all-female roots trio Baskery.

I first played Reggae Far East back in January 2007 when SnC was just a year old. There have been a few outings since then but now seemed a good time for another. His music has a gentle, almost diffident feel to it with no pretension, just a deep delight in making and combining the sounds which incorporate elements of Japanese instrumentation. To great effect.

“My name is H.Kobayashi. REGGAE FAR EAST is my unit. I was born in 1958. I am a retiree. I live in Yokohama, Japan. I like reggae music. I make it. My music is exotic and danceable. It is very unique. Listen to my music.”

Celtic Reggae Revolution was formed by Brian Gilligan the former Singer/Songwriter of the Aberdeen based Paddyrasta. Now based in Barcelona, Brian has continued recording his songs and music and plays with local based musicians including Moya Sands (N.Ireland) and Ismael Gonzalez (Venezuela).

Brian has been making Irish/Jamaican music for quite a time now. He describes Celtic dub as ambient Irish traditional instrumentals with dub-style drum and bass.

The album Celtic Dub Vol 1 is available digitally from CD Baby and Amazon.

You can listen through Spotify on his website and at

Black Eskimo is Ingrid Chavez and Marco Valantin, their debut EP Deep has been out for a month or two and the second EP “Heady” is also out now. Together, the two EPs make up the Deep & Heady album. Complicated innit?

Born of a mutual love for Hip Hop, Indie Pop, Electronica, and Ambient music, Black Eskimo’s blend of down-tempo Chicago beats and spoken word is a triumphant return to form for Chavez, and an impressive debut for Valentin.

In addition to her work with Prince, Chavez co-wrote Madonna’s smash “Justify My Love” with Lenny Kravitz, and has performed with Japan’s David Sylvian, and Ryuichi Sakamoto. Marco Valentin is an indie hip hop producer from Chicago who learned how to make beats using an old Karaoke machine by lifting loops off Wu Tang and Mobb Deep tracks.

Chavez’s fans will instantly recognise her poetic lyrics and seductive vocals which breathe colour into Valentin’s gritty urban beats and lush production techniques. Ingrid Chavez and Marco Valentin started on different paths, but they arrived at the same magical point in their musical journey.

Hear loads more of their music on Soundcloud at https://soundcloud,com/blackeskimo

From the ground-breaking Blues + Beat album in which Jan Mittendorp, guitarist, label boss, booking agent and above all friend of the blues mixes up samples from his own label with new beats.

“A collection of remixes, reinventions and rejuvenationsendorp blasts new life into the style by blending modern beats and blasts from the future into existing tracks for a fresh sound that makes the rhythmic heart of the blues beat stronger than ever.”

While effortlessly incorporating his instrumental zeal for the saxophone over funky rhythms and jazzy melodic beats, it’s no wonder why the masses flock to see GRiZ perform live. After playing successful gigs at festivals across the country, including Movement Festival in his hometown of Detroit, New York City’s Governor’s Ball, Insomniac’s Electric Forest and the Global Dance Festival in Red Rocks, Colorado.

As GRiZ released his second full length album on September 14, which is also the first birthday for his Mad Liberation LP, the first single “Gettin’ Live” already has over 300,000 plays on SoundCloud and is available as a free download.

Nov 28 The Vogue Indianapolis, IN

The Wicked Venetians are a trio of musicians operating in the London area and should be considered a genuine threat to the machines that run our lives.

Rock has lost it’s role. Punk is dead. The music industry is dying(haha) and musicians are now just failing business men begging for scraps from a forgotten banquet. They are The Wicked Venetians, a burning effigy and one last f**k you… and don’t worry, they say they’ll be gone soon too.