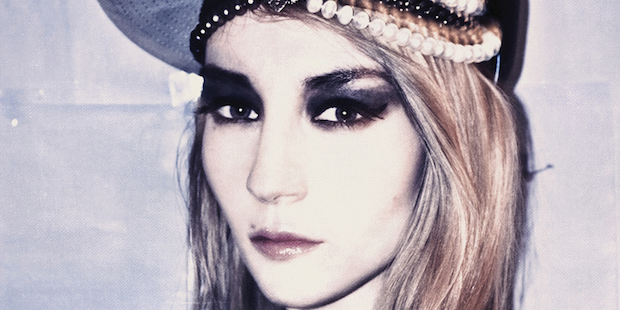 An outrageously quirky mix this week of everything from up-beat ska to girl-pop to a beautiful lament by way of some great electric blues so this is your breath of fresh music air from all around the world selected and gift wrapped for you in a barn on the east coast of England.

The track is from their Janendo album Chimichurri.

The last three years have seen national Canadian and European tours, national radio play on CBC and BBC for the debut EP ‘Flicker‘.

Tim is also a regular collaborator with Tanya Davis, appears on her latest album Clocks and Hearts Keep Going,

The release of a new album by Jordan Reyne is always a special occasion. She somehow manages to simultaneously confound your expectations and delight you with how she has moved her music on. I suppose this should not really be such a surprise for a restless character who left her Native New Zealand a few years ago an semi-settled in Germany before making the move to London, then Lancashire, then back to London and now to Birmingham in the English midlands.

Constantly shifting her musical focus it’s difficult to categorise her music. The press has tried, believe me:

from “industrial-tinged folk rock”  and  “antipodean steampunk” (Children of a Factory Nation and How the Dead Live), to “Urban found sound meets celtified electronica” (The Annihilation Sequence and Passenger) to “creepy, dark industrial” (The Ironman and Birds of Prey) and “Experimental sci-fi for the criminally existential” (The Loneliest of Creatures).

The common denominator is her masterly telling of stories. Her music really is suited to the album form.

Jordan’s live shows are a feat in live looping; a one woman show blending environmental sounds with the synthetic. A mix of acoustic loops, celtic melodies and machine sound rhythms recorded live in the moment.

It all sounds a bit dark and intense, indeed her live show is deeply personal and affecting and yet her delicious sense of humour shines through. If you get a chance to see her live, do, she’s playing the DV8 Festival in York on 11 July. Second best (in my opinion) having had her into the barn for a session a while ago, is to catch her in Second Life where she regularly performs for a loyal and dedicated audience who recently put her to the top of the Bandcamp chart based just on for pre-orders for her new album, The Annihillation Sequence, which has its physical release at the end of the month although downloads are available from Bandcamp right now.

CMJ staff spend months of blood, sweat and ruined ear drums booking the showcases for the Marathon each year. And you can apply for the chance to be a part of it too! Artists looking to make their mark, prepared with an electronic press kit, can apply exclusively via Sonicbids by 11:59 PM EDT on June 26, 2013 for the chance to showcase at CMJ 2013.

Fair warning, there will be no extensions on artist submissions this year. The 26th is it, the end, finito, kaput!

Andy Brown has emerged a must-see (and hear) performer on the Canadian music scene. Touted as a performer that ‘gets into your head and heart’, the Galaxie Rising Star winner has a contemporary folk-rock style all his own, taking you on a lyrical journey that transcends a realm torn between love, happiness, and sorrow.

Brown’s honesty as a songwriter, expressive showmanship, and soaring vocals has made him a fan-favourite wherever he performs, from a quaint theatre in North Carolina to the sprawling hall of Montreal’s Corona Theatre.

A 2010 and 2011 International Songwriting Competition finalist, Brown has turned heads with his band’s sophomore album, False Alarm (August 2009). With a wonderful blend of belt-out ballads, folk-rock, and pop-infused hits, the band’s visceral energy on-stage is contagious and has landed them at some of the countries top music festivals (Harvest Jazz and Blues Festival, NXNE, Indie Week, Canadian Music Week.

Brown is currently wrapping up post-production on his new album ‘Tinman’, recorded at The Sonic Temple in Halifax, NS.

Aynsley Lister; an incredible guitarist whose brand of blues-based rock delivers contemporary song writing fuelled with heart and soul. Whether passionately writing and recording his own material or mesmerising audiences at his live shows one thing is abundantly clear: music is hard-wired to his DNA.

With lashings of critical acclaim and years of high profile touring, Lister’s resumé speaks for itself and firmly secures his position as a leading light in the resurgence of British blues-infused music.

Aynsley is currently ready to release his tenth album, ‘Home‘, which is currently available exclusively at his shows prior to its release date. Listening to the album this morning, a couple of tracks (including Insatiable) brought to mind a late associate of mine, Paul Kossof who was the guitarist with Free. Take a listen to his (almost) solo album Back Street Crawler to hear what I mean. More about Paul in a sec.

The album is released on his own label (Straight Talkin’ Records), as he’s sagely decided to take control by bringing everything in-house following other successful artists who’ve cut out the record companies with astonishing results. Needless to say, the tour in support of the album promises to be something truly special, not just for the fans, but for the main man himself.

I was looking for a video to demonstrate Paul Kossoff’s style for you I came across his dad’s intensely moving talk about Koss’s life.

It’s quite long and in five parts of around 10 minutes. I’d known that David Kossoff was doing these talks way back in the early 80s but I never actually saw it. This morning I sat down and invested best part of an hour in doing so. The best value hour I’ve spent all week.

If you have the chance, please do the same. It is enlightening.

And finally, take a look at this beautifully sparse performance of All Right Now at the Isle of Wight Festival in 1970. It’s not just Koss that’s playing sparingly, Listen to how little there is of Andy Fraser’s bass.

Her Royal Harness is the conception of Norwegian songwriter Helene Jaeger, described as a romanticist, catharsis driven take on genre-synthesist pop.

The project came into being soon after Jaeger encountered London producer-instrumentalist Dylan Long in an internet music forum.

According to Jaeger, The Hunting Room is a record about “someone not quite at home”, chronicling a series of attempts at breaking through restrictions, searching for meaning, trying to get a reaction from an unresponsive environment. On the origin of the moniker “Her Royal Harness” Helene says “From the time you are born, people around you continually attempt to define who you are. That’s one way of looking at the harness.”

The Hunting Room is due out June 24th, produced and recorded by Her Royal Harness in their basement project studio in Bergen, Norway and mixed by Justin Gerrish at DNA Studios NYC.

The São Paulo all-­‐girl quartet have continually delivered ever since their debut Cansei de Ser Sexy, translates to “Tired of being sexy”— a quote from Blue Ivy’s mom Beyoncé. Not only did the album introduce CSS to the world, it yielded the hit, “Music Is My Hot Hot Sex”, the track, which landed a placement in the coveted iPod commercials.

Los Angeles is a polarizing place. You either love it, or you hate it. You’re either depressed by it, or you’re inspired by it. You either want to leave immediately, or you want to stay forever. CSS had a hell of a night in the City of Angels during October 2011. As a result, that fateful evening served as something of a jumping off point for their fourth full-­‐length album, Planta (SQE Music 6/11), translates as “Plant.”

They have a hell of a touring schedule coming up with UK dates in September.