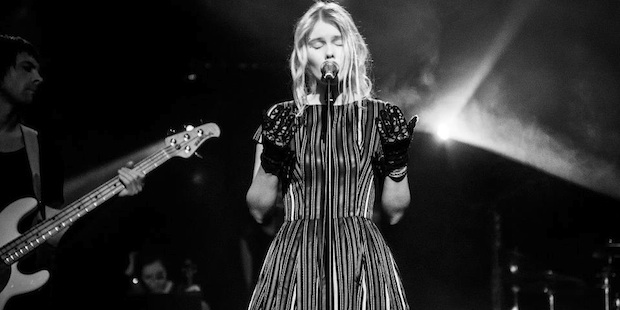 Bloodgroup – one of four fine Icelandic artists on this week’s show.

Suffolk ’n’ Cool’s a few hours late this week but I don’t think that’ll affect the music … at all. We’ve got an interesting mix of genres again this week as we return to our Icelandic theme which got slightly derailed by The Great Escape specials.

It’s always a temptation to generalise about Icelandic music but really, there’s loads of variety coming out of a relatively tiny island in the north Atlantic. I would say, though, that most times it sounds as though it has been thought about.

With parents deeply into the blues it’s no surprise that, even before he was born, Davide was being influenced by Clapton!

It has taken a while to get to his first album, BORN ELECTRIC, which was recorded with the trio Loud Stuff and is almost entirely made up of songs written by Davide and featuring special guests including Robben Ford, David Garfield, Carl Verheyen and Pippo Guarnera.

Pascal Pinon are the twins Jófríður and Ásthildur, two girls from Reykjavík, Iceland. When they were only fourteen they got together with two of their friends and decided to start a band. Using the instruments they had, Pascal Pinon worked in the twin’s bedroom. At the same place they played their first gig: calling it ‘The Friendly Concert’. Only a few months later Pascal Pinon had already played various local venues and decided to record their first album. They borrowed a house in a small town called Vogar and recorded the self titled album with only one microphone. It sounds extremely cute.

The main impact on the twin’s music may be a certain shyness when faced with the thin walls of their bedroom. You’ll find a very special record. A twee mixture out of acoustic neofolk and low-fi pop: an enjoyable journey through what it’s like being a teenager. It was nominated for The Icelandic Music Awards as Newcomer of the Year 2009.

The queens of ‘Krutt’ (cute) Pascal Pinon have just been out on tour next month with Sin Fang. Heaven!

This twinklesome twosome hit the road in May, kicking things off (in a very gentle, sparkly way) in groovy Hamburg.

You may have seen the video before,, but enjoy it anyway!

Dee C’rell was born in Hackney and grew up in Shoreditch, Central London. He is a leading academic expert on contemporary electro-acoustic jazz. He is known as a music composer, pianist, and keyboard player, electroacoustic composer, installation artist, remixer, DJ, photographer and writer.

Considered as one of the most exciting musicians within electronic jazz based music by a vast array of the most significant DJ’s in the world, Dee C’rell’s music is increasingly influential worldwide. His music readily appears on a variety of record labels and radio stations within electronic and acoustic music, and his name is synonymous within music genres; such as, down-tempo, lounge and nu-jazz. He currently owns the contemporary record label, Holm Records, which also releases many of Dee C’rell’s compositions and his collaborations with various artists.

From the 12 track album of the same name, which comprises a “Mixture of 90’s jungle, ambient and local weirdcore.”

Árni Grétar, best known under the pseudonym Futuregrapher, is an electronic musician described by Grapevine magazine in 2009 as “fucking brilliant.” He was one of the leading members of the local Weirdcore scene and has been praised for his great live performances. He founded the record label Möller Records in 2011 with Jóhann Ómarsson (aka Skurken).

You can get the music direct from Möller via Soundcloud at soundcloud.com/futuregrapher

Cut Out Your Tongue – Bloodgroup (Iceland)

Following on the heels of a well-received debut, their second album “Dry Land” was hailed by homeland critics as one of the finest albums of 2009, and awarded the Icelandic equivalent of the Mercury prize, the Kraumur award.

The band toured the album relentlessly over the next two years, taking their widescreen stage show to SXSW in Texas, NXNE in Toronto, Roskilde in Denmark, CMJ in New York, Eurosonic in the Netherlands and, of course, Iceland Airwaves.

In 2012, they returned to the studio, full of new ideas and more ambitious than ever. Now the results are here in an album that will perhaps be considered their magnum opus. “Tracing Echoes” is a highly-developed mixture of majestic ballads, grinding beats, and a pop single or three for good measure.

Asa you’ll see from their site they have been touring extensively in Europe this spring.

Nóra traces its roots back to a dark garage on the west side of Reykjavik, Iceland. There, brother and sister Egill and Auður started making music back in 2006, along with their good friend Hrafn. The band was fully formed two years later when the trio was joined by Bragi and Frank. Their debut album, Er einhver að hlusta? was released in 2010 and was well received by critics and the public alike. Their charming and tight performances quickly gathered them a loyal following in the Reykjavik music scene. Bragi left the band in 2011 and was soon replaced by percussionist extraordinaire Óskar.

Nóra has a unique sound, characterized mainly by the interplaying vocals of brother and sister Egill and Auður, a dense soundscape made from various synths and samples topped with charming, if at times majestic, guitar and keyboard melodies. The band-members’ varying musical background and taste has led to a very diverse catalogue of original songs.