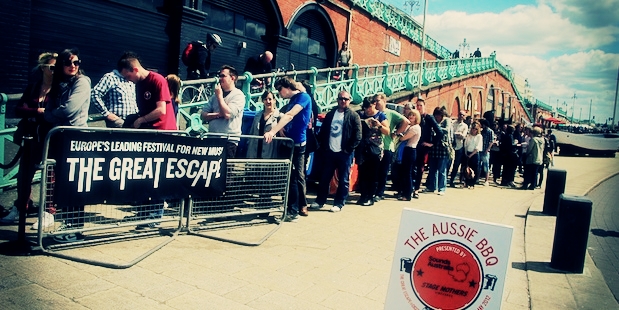 An Escape queue to get in! Lots of Aussie bands on this week’s show. Most at TGE next week.

Music from almost opposite ends of the earth this week. We have the second of our Icelandic features and from round the other side and almost as far down, a bunch of tracks from Aussie bands that will be showcasing at The Great Escape next week. There’s quite a variety.

We also have news of what may be the sad demise of The Rolling Stones as their current US tour looks rather shaky.

Sydney four-­piece The Upskirts are a hard band to pin down. With two 5-track EP’s under their belts they have dabbled in psychedelic textures and reverberated surf – rock guitar riffs, frenzied post-punk idiocy and garage pop grooves.

What is left is an eclectic amalgam of rock music, and a band that is excited rather than ambivalent about the music they play.

Their live shows are a swoon of highs and lows with an unmistakable dynamic energy that has turned heads and raised eyebrows.

Having played countless shows across bars, rooftops, backyards and courtyards in Sydney and up and down the east coast, The Upskirts have an exciting year ahead in 2013.

They’re here in the UK for their first overseas tour as well as playing at the Great Escape in Brighton next week.

With plans to head back into the studio again very soon, it can only be expected that the band will continue to surprise, so do yourself a favour, buy a record, see a show and disregard your expectations.

SUNDAY 12th MAY @ THE AUSSIE BBQ at CARGO, SHOREDITCH 4:30pm

Blending classical, electronic, ambient, avant-garde and pop influences, Biggi Hilmars has developed a distinctive, haunting, provocative, original music style, for which he is becoming so sought-after.

Born in 1978 in Reykjavik, the London based composer and artist has already made an impact on the film and tv scene composing for international films such as IDFA and Edda Oscar Awards nominee ‘Future of Hope’ (2010) and ‘Heaven on Earth’ (2009) by award winning director Deepa Mehta and most recently his music was featured on Ridley Scott’s ‘Life in A Day’ movie trailer.

Biggi fronts the band Ampop, which has written award-winning albums ‘My Delusions’ (2006), ‘Sail to the Moon’ (2007) and a string of hits ‘My Delusions’, ‘Gets Me Down’ in his homeland.

Here’s a live performance from the ‘All We Can Be‘ debut album release concert at Frikirkjan Church, Reykjavik on October 4th.

Great news for UK fans of the cinematic and splendid Icelandic group Hjaltalin – they are heading to dear old Blighty for a run of dates in May!

The group kick things off at the Social in central London on May 14th, before playing the Hoxton Bar And Grill on the following night. They then hotfoot it down to sunny (possibly) Brighton to play Above Audio on 16th and the Brighthelm Centre on 17th. For further up to the minute details, swing by the band’s Facebook page.

One More Tear – Echo and the Empress (Adelaide, Australia)

Meet Echo and the Empress, a South Australian based musical collaboration of two sisters and 4 piece live on stage. In May 2012 their song Balloon was announced as the winner in the Pop Category for the 12th Annual International Independent Music Awards. After their big win, the girls were invited to play Gorgeous Festival in late 2012 alongside other great Australian musicians such as Missy Higgins and Dan Sultan. This is where UK’s highly regarded festival booker, Martin Elbourne, saw the girls and invited them to perform at the UK’s Great Escape Festival next week. They also joined the line up for Liverpool sound city and are set for Live at Leeds.

As their performance journey continues, Sam and Elise join the girls on stage with percussion and bass that adorn the simple E&E sounds with vitality. After launching their debut self-titled album on the 31st March at The Promethean in South Australia, the girls have now released a new single One More Tear.

You can hear more music at their site and catch them live, just as I’m intending to do at TGE:

It’s not been a good week for the Stones

Tickets for their show at Staples Centre in LA were going very slowly last week only the day before you could get blocks of 8 seats together, whole sections of the venue were very patchily sold. Thousands of seats available, but then they were charging up to $600 per seat and you had to buy at least 2 seats.

Then they caved in – thousands of seats were discounted to $85 and, of course the venue sold out with quesues around the block. Just like it used to be when concert tickets cost under $10.

Sales for further dates on their 50th anniversary tour are also weak – at those vastly inflated prices.

Then, to whip up a bit of interest they release video on their own official YouTube channel that is utterly laughable, as Bob Lefsetz said a couple of days ago, “This is The Stones. A band that can’t even play “The Last Time” as well as you did in middle school.”

Watch the video, if you can, and then take a look at the comments.

It’s just so very sad, seeing a once great band descend into mediocrity and greed.

But it gets worse – they need to really promote the hell out of the rest of the tour. But please, not like this:

To put the icing on the cake, they are just releasing ‘Brussels Affair‘ mega-package, which includes a once-rare recording of the Stones playing Brussels in 1973 (on vinyl), a tour lithograph, a Seiko lip-and-tongue watch, vintage packaging, even a book with Jagger’s signature. It’s an edition limited to 1,727 copies so it will probably sell out – in every sense.

The base price starts at $750, with the minimum shipping and tax putting the price tag at $845.

It’ll be interesting to see what happens to ticket prices. Perhaps this will signal the beginning of a return to sanity.

Having worked within the confines of various musical genres over the years as a professional musician, Dune had found herself increasingly dissatisfied with toeing the line. “I needed to isolate and go deeper into my own psyche, a place that was not always comfortable,” she says. “I realised the only way I would have the freedom to do what I wanted was to build my own studio, which I did last year with my husband, and then record and release my music independently.

Dune has a love of the lineage of electronica. “Some of the tracks definitely echo the music being made around the time I was born,” she says. “My dad was active in the experimental electronic movement in the UK in the 1970s, and a lot of the synths I was using, like the Roland Jupiter 8, were his old gear from that time.”

The results are a fusion of tribal beats, eastern scales and an occasional mosey into the avant-garde. While Dune is best known for her vocal portfolio, she’s also a skilled keyboard player, evidenced by the adept nods to synth pioneers like Brian Eno and Gary Numan. Pangs of distorted reverb and analogue delay shimmer throughout the songs, which are broken down to their key components and never overplayed. It’s a restraint that belies her years spent at the Sydney Conservatorium of Music.

“As the weather gets hotter in the Northern hemisphere, so too do the opportunities for Australian artists to showcase their talents to the world. The UK is first cab off the rank, with Sounds Australia presenting The Aussie BBQ in London on May 12 at Cargo with 12 bands for a huge 12 hours… plus the obligatory BBQ feast.

We then return to Brighton for The Great Escape, with 20 Australian artists hitting the seaside town to no doubt dazzle and delight international delegates and local fans alike.

Come May 21, we head to the even warmer climes of Singapore, where nine Australian artists will showcase at Music Matters, “Asia’s #1 celebration of music discovery”, including a keynote performance from Gurrumul and The Aussie BBQ showcase.

May is also the time for Aussie artists get applications in for local and international showcasing opportunities later in the year.

Reeperbahn Festival takes place in Hamburg, Germany from 25-28 September and application are open until July 1.

Amsterdam Dance Event, taking place in The Netherlands 16-20 October, also has an application form to showcase (no closing date advertised).

Back home, and Brisbane’s BIGSOUND Live applications have just been extended to May 20. Apply here for the chance to showcase to local and international delegates between 11-13 September.

Messrs’ story officially begins in 2011, but their heritage goes way back. Having played together in various musical guises over the years, the band’s five members – Josh Moore on vocals, Justin Walker on guitar, Chad Hooper on drums and brothers Craig and Shane Lock on bass and synth respectively – took a long time to finally feel comfortable in their creative shoes.

Eschewing their skittish, scatty indie punk stylings of their earlier days, Messrs re-emerged a much more honed and focused unit in 2011.

Having toured extensively, playing festivals such as The Great Escape (UK), The Big Day Out (AUS) and Parklife (AUS) and supporting the likes of Phoenix, Neon Indian and Kele, Messrs eventually got around to putting out their debut EP in late 2012. Welcome To Nowhere dropped last November to immediate acclaim, reaching the Top 40 in the Australian iTunes Albums Chart. The EP’s lead single “Desert” also made a massive impact, racking up nearly 60,000 Vimeo views to date.

They’re not at TGE this year but someone’s got to entertain the folks back home. They’re playing the Grace Darling in Adelaide in Friday night.